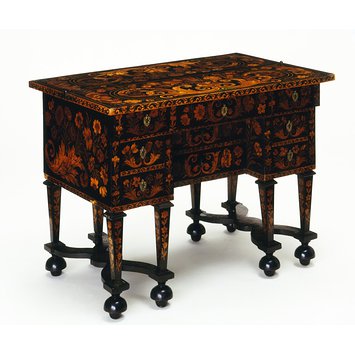 This type of desk, with a top that folds back to reveal a writing surface, was known as a bureau brisé. It is a form that developed in France in the late 17th-century. This desk is elaborately decorated with floral marquetry. The marquetry extends to the back of the desk and the backs of its legs, suggesting that it was intended to be seen from all four sides.

The desk was bequeathed to the Museum in 1882 as part of a suite of late 17th-century furniture. This group was said to have been bought from the château de Montargis, in northern France.

Desk (bureau brisé) of rectilinear form, the case built as a three-sided dovetail box. The top of the desk is made from two hinged leaves. When the front leaf is folded back, a shallow fall front is released. Behind the fall front sits a writing surface and five small drawers. The outside face of the fall front is decorated with three blind drawer fronts. Underneath the fall front are six drawers, the central two recessed. The bureau sits on two sets of four legs, each set joined by two stretchers.

The case is softwood, the leg stretchers are poplar and the drawers are oak with walnut. The whole desk is decorated with marquetry of various woods. The marquetry extends to the back of the case and backs of the legs.

The top and sides of the bureau are veneered with ebony inlaid with floral marquetry. On the back, two mirrored sprays of floral marquetry are bordered with bands of rosewood veneer. Each side is decorated with a large asymmetrical spray of flowers. The case top is decorated as two near-matching panels of marquetry. On each panel a large central composition of acanthus leaves and flowers is separated with a decorative filet from a smaller composition of acanthus leaves, flowers and shells at each of its outer edges. The bureau's external drawers are decorated with panels of acanthus leaves and flowers.

The interior of the bureau is veneered with cherry and set with panels of marquetry, of scrolling ornament, in purplewood and cherry. The legs are all decorated on all of their faces with a vertical spray of flowers inlaid in cherry.

This bureau was given to the South Kensington Museum in 1882, as part of a group of furniture bequeathed by Miss Margaret Coutts Trotter (1809-1882). The group had, by repute, been part of the furnishings at the château de Montargis in 1832: other pieces in the group arrived in the Museum with labels attached to them, written by Margaret Coutts Trotter, that stated: 'during the Reign of Louis Philippe / the Chateau of Montargis near / Fontainebleau was entirely / cleared out and destroyed / I saw the whole of the furniture / de salle, put together for sale / [I] bought it as it stood' (label attached to 1041-1882).

The history of the pieces is undocumented, but it is possible that they were acquired by Philippe I duc d'Orléans (1640-1701) for one of his residences and then later removed to Montargis after his death. The château de Montargis stayed in the possession of the Orléans family until the late 18th century. From 1791 it changed hands several times over a short period, before eventually being demolished in the 25 years between 1810 and 1834. Towards the end of the demolition process the contents of the château were sold. The group of furniture that is now in the V&A was bought by Coutts Trotter at an undocumented sale at the château in around 1832.

This desk is of a form known as a bureau brisé, or 'broken desk'. The name comes from the way that the desk's top splits, with the front flap flipping back, or 'breaking', to reveal a writing surface below. The bureau brisé was developed in the late
17th-century. Contemporary illustrations show that the desks were used as dressing tables, with mirrors and candlesticks placed on top of them. 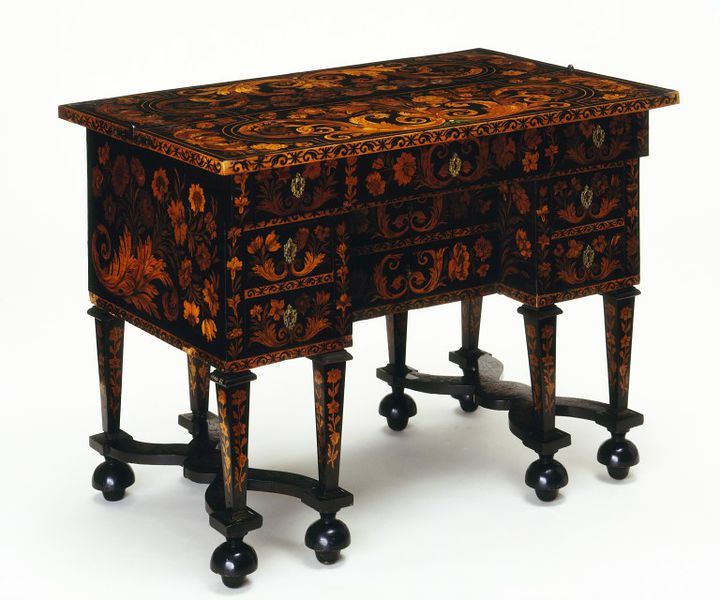