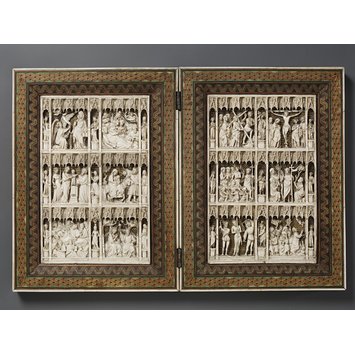 Scenes from the Life of Christ

This is a diptych with scenes of the Life of Christ in ivory and a case with a lid in cut and punched leather. The Diptych is from France, Paris or North Italy, probably Milan, while the case with lid is from France.
Ivory was used all over Europe for religious works of art. It was often combined with precious metals and usually took the form of relief panels, for book covers, portable altars and caskets. An almost unbroken tradition of ivory carving extends from the Roman and Byzantine empires until the end of the 14th century. From about 1250, Paris became the centre of production for figures and reliefs intended for private devotion.

The wood case is decorated with the arms of Boucher d'Orsay on one side and Raguier on the other, and would therefore appear to refer to Bureau Boucher and Gillette Raguier, who married in 1414. Bureau Boucher (d. 1461) was Lord of Piscop and Orsay (Essonne), First Counsellor to Parliament (1414/15-17) and Counsellor to Charles VI, and held other high offices; Gillette Raguier (d. 1481), was the daughter of Remon Raguier, also a Lord of Orsay. A closely comparable case, with the arms of Philip the Bold of Burgundy (1363-1404) was made for an ivory Annunciation group, probably of 1400, now in the Musée d'Art et Histoire Guy-Baillet in Langres.

Each wing has a single large pierced ivory relief with six scenes under elaborate canopies. At the sides and in the middle are narrow upright compartments with individual figures of saints standing on pedestals within niches. On the left wing are the Annunciation, the Nativity, the Presentation in the Temple, the Flight into Egypt, the Death of the Virgin and the Glorification of the Virgin. The standing saints, all female, from top left to bottom right, are St Agnes, St Catherine, St Mary Magdalene, St Barbara, St Margaret, St Veronica, St Apollonia, St Agatha, and St Clare. On the right wing are the Carrying of the Cross, the Crucifixion, the Resurrection and the Maries at the Sepulchre, Christ appearing to the Maries, the Flagellation and the Agony in the Garden; the standing saints, all male, from top left to bottom right, are St Lawrence, St Michael, St Nicasius, St Denis, St John the Baptist, St Stephan, St Louis, St Christopher and St Francis of Assisi.
The reliefs are unpainted but are set off with backgrounds of painted vellum in imitation of contemporary manuscript illuminations, consisting of lozenges and squares in gold, black, dark blue and red.

Carved elephant ivory in hinged wood frame with bone and wood intarsia and painted vellum background, with a wood and cuir bouilli case

Diptych and case with lid, ivory, Scenes from the Life of Christ, France (Paris) or North Italy (possibly Milan), probably about 1414 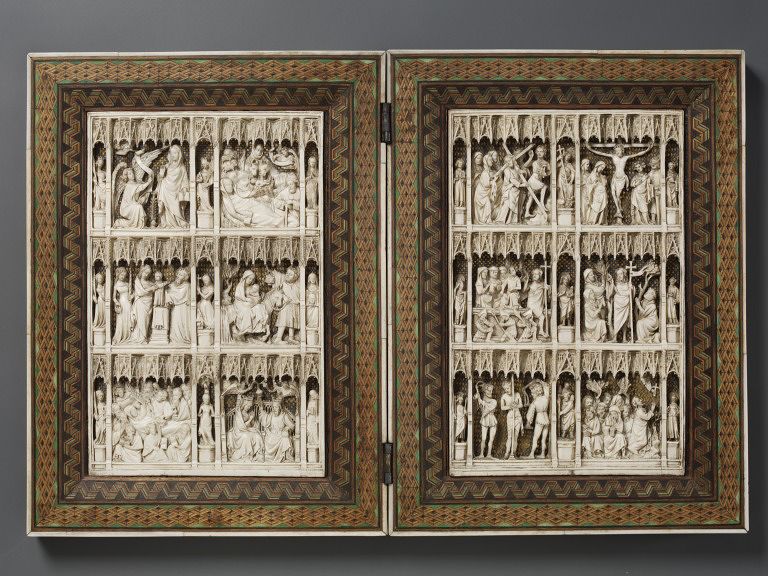