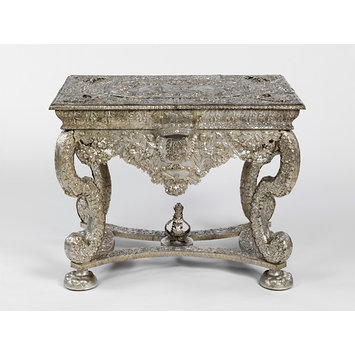 This table was bought by the Museum in 1868 from Giovanni Franchi and Son of Clerkenwell, London for £110. It is an electrotype copy of a silver version dating from around 1660 belonging to Knole House in Kent. It was bought with 23 items copied from the house including its companion mirror and two torchères (candlestands). Surviving silver furniture was rare so the ensemble was used as a design source for students in the government schools of design under the aegis of the Department of Science and Art.

The Museum bought electrotypes as part of its growing collection of reproductions. This collection enabled students to look closely at both modern and historic objects that were otherwise inaccessible. Multiple copies of objects allowed many schools to study them at once. Electrotypes provided the same function as the Museum's collection of plaster casts. the 19th century art critic, Charles Eastlake, felt electrotypes were more instructive than contemporary silver productions: '... so far as the interests of art are concerned it is better to possess a copper-gilt flagon of a good design than a modern trophy cup of twice its weight in gold.'

Silver-plated copper electrotype of a rectangular silver table at Knole House in Kent, embossed and chased on the top with the contest of Apollo and Pan, with each corner decorated with an earl's coronet. The table has scroll legs and a pendant front similarly decorated, the whole embossed with flowers, fruit and foliage.

This table was bought by the Museum in 1868 from Giovanni Franchi and Son of Clerkenwell, London for £110. It is an electrotype copy of a silver version dating from around 1660 belonging to Knole House in Kent. It was bought with 23 items copied from the house including its companion mirror and two torchères (candlestands). Surviving silver furniture was rare so the ensemble was a design source for students in the government schools of design under the aegis of the Department of Science and Art.

Historical significance: As an electrotype this table is an example of a 19th-century design model. Electrotypes play a key role in helping us to understand the V&A in its earliest days.

The V&A grew largely out of the Great Exhibition in 1851 and, under the guidance of Henry Cole, sought to arrest the perceived decline in British design. The Museum aimed, initially, to collect 'modern manufactures' for the education of manufacturers, designers and the public. Cole was also in charge of the Government Schools of Design, which he set about reforming. Cole passionately believed in the potential of both museums and the schools of design, to raise standards of taste.

The Museum bought electrotypes as part of its growing collection of reproductions. This collection enabled students to look closely at 'historic' objects that were otherwise inaccessible. Electrotypes provided the same function as the Museum's collection of plaster casts.

Electrotypes are also relics of 19th-century industrialisation and mass production. The process of electroplating and electrotyping favoured companies that could afford large factories and expensive technology. The power of the machinery and new technology now at the disposal of the silver industry allowed modern mass production to develop. Electroplaters could create thousands of identical objects using a fraction of the amount of silver to create "a degree of mechanical finish it would be difficult to surpass" (Art Union, 1846). The focus of silver and silver product manufacture moved from London to the new factories of Birmingham and Sheffield.

This table is an electrotype, an exact copy in metal of another object. Electrotypes were a by-product of the invention of electroplating (silver plating by electrolysis).

ELECTROPLATING: Electricity revolutionised the trade of coating base metal objects with silver. Patented by Elkington and Company in 1840, this technique was the fulfilment of a century of research into the effects of electricity on metals. A negatively charged silver bar, suspended in a vat of potassium cyanide, deposited a coating of silver on a positively charged base metal (mostly copper, later nickel-silver) object immersed with it. Electroplated objects were fully formed in base metal before plating.

This table was therefore electroformed in copper from moulds of its original and then electroplated.

Early experiments in electroplating, often by amateur scientists using Elkington's home electroplating kits, involved coating fruit, flowers and animals in silver or gold 'with the most perfect accuracy'. They 'retained all the characteristics of the specimens before their immersion' (Penny Magazine, 1844). The Art Journal enthused in same year, 'The electrotypes are perfect; the finest lines, the most minute dots are as faithfully copied as the boldest objections'

Henry Cole, the first director of the South Kensington Museum (V&A), quickly grasped the educational potential of this new technique. He employed Elkingtons and Franchi & Son of Clerkenwell to take moulds of historic objects in the Museum (at their own risk), create copies in a base metal and then electroplate them. These could be sold freely as reproductions, with a gold, silver or bronze finish, provided they bore the South Kensington Museum's official stamp. To avoid breaking English hallmarking laws, all marks were to be deleted from copies of silver objects.

Elkington's display of electrotypes at the 1867 Paris Exhibition proved extremely popular and prompted Cole to organise a convention at which 14 European countries agreed to exchange works of art. Representatives of Elkington's and the V&A sent staff to Germany, Sweden, France, Denmark and Hungary. The most ambitious trip, to Moscow and St. Petersburg in 1880, secured copies of over 200 items from the Kremlin and the Hermitage, including the celebrated Jerningham Wine Cooler and much Elizabethan and Stuart silver sent as ambassadorial gifts to the Tsars. By 1920 the V&A held over 2000 electrotypes. Copies toured the country as part of the museum's educational programmes and were sold to the public and to museums and art schools. 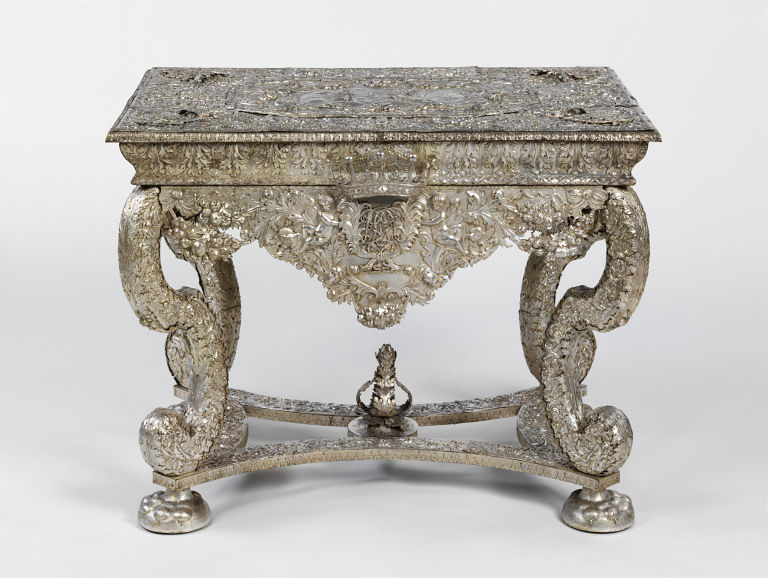