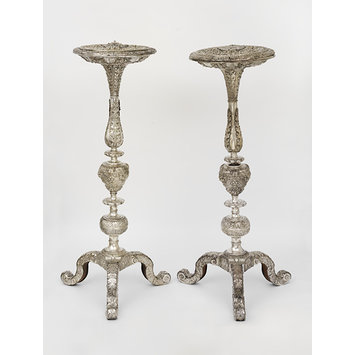 These torchères were bought by the Museum in 1868 from Giovanni Franchi and Son of Clerkenwell, London for £35. They are electrotype copies of silver versions dating from around 1660 belonging to Knole House in Kent. They were bought with 23 items copied from the house including their companion table and mirror. The originals are rare survivors whose existence was publicised in 1836 by the antiquary, Henry Shaw in Specimens of Ancient Furniture. The ensemble was a design source for students in the government schools of design under the aegis of the Department of Science and Art.

The Museum bought electrotypes as part of its growing collection of reproductions. This collection enabled students to look closely at both modern and historic objects that were otherwise inaccessible. Multiple copies of objects allowed many schools to study them at once. Electrotypes provided the same function as the Museum’s collection of plaster casts. the 19th century art critic, Charles Eastlake, felt electrotypes were more instructive than contemporary silver productions: '... so far as the interests of art are concerned it is better to possess a copper-gilt flagon of a good design than a modern trophy cup of twice its weight in gold.'

Silver-plated copper electrotype of a candlestand at Knole House in Kent, on tripod base, with circular tops and stems of multiple knops and balusters, the whole embossed with flowers, fruit and foliage.

These torchères were bought by the Museum in 1868 from Giovanni Franchi and Son of Clerkenwell, London for £35. They are electrotype copies of silver versions dating from around 1660 belonging to Knole House in Kent. They were bought with 23 items copied from the house including their companion table and mirror. Surviving silver furniture was rare so the ensemble was a design source for students in the government schools of design under the aegis of the Department of Science and Art.

Historical significance: As electrotypes these torchères are examples of 19th-century design models. Electrotypes play a key role in helping us to understand the V&A in its earliest days.

These torchères are electrotypes, exact copies in metal of other objects. Electrotypes were a by-product of the invention of electroplating (silver plating by electrolysis).

ELECTROPLATING: Electricity revolutionised the trade of coating base metal objects with silver. Patented by Elkington and Company in1840, this technique was the fulfilment of a century of research into the effects of electricity on metals. A negatively charged silver bar, suspended in a vat of potassium cyanide, deposited a coating of silver on a positively charged base metal (mostly copper, later nickel-silver) object immersed with it. Electroplated objects were fully formed in base metal before plating.

These torchères were therefore electroformed in copper from moulds of the originals and then electroplated.

Henry Cole, the first director of the South Kensington Museum (V&A), quickly grasped the educational potential of this new technique. He employed Elkington’s and Franchi & Son of Clerkenwell to take moulds of historic objects in the Museum (at their own risk), create copies in a base metal and then electroplate them. These could be sold freely as reproductions, with a gold, silver or bronze finish, provided they bore the South Kensington Museum’s official stamp. To avoid breaking English hallmarking laws, all marks were to be deleted from copies of silver objects. 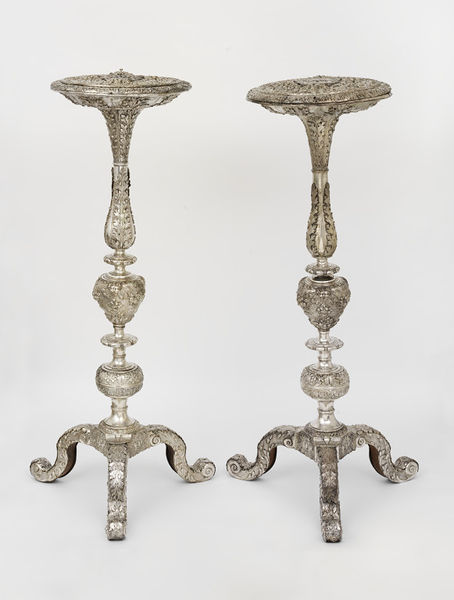