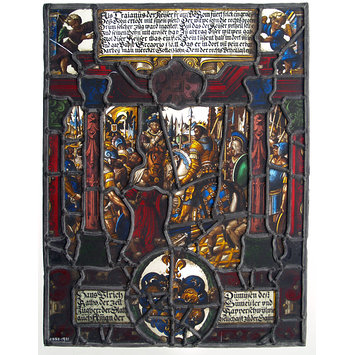 This roundel has been attributed to the glass painter Josua Klein who was active in Altdorf and in Rapperswil, Switzerland, from the 1620s to the 1640s. His monogram appears in the scroll at the bottom of the roundel.

The subject depicted on this panel is the story of the 'Clemency of Trajan'. This subject would have had special relevance to the person or persons who commissioned this panel. The image is derived from an engraving by the artist Hans Sebald Beham who executed this work in 1537.

The story of the Clemency of Trajan was recorded as early as the mid 13th century in the 'Golden Legend'. A widow, as seen in red in the centre of the panel, begs vengeance for the death of her son from the Emperor Trajan. Trajan, mindful of justice for the weak and innocent, offers up the life of his own son who had been responsible for the murder of the widow's son.

In the middle of the 16th century new techniques for producing decorated glass were introduced. Glass paints known as ‘enamels’ were painted directly onto the glass. The colours were produced by adding metallic oxides to a glass frit mixture. The resulting colour range included strong purples, greens and blues, as we see here. Lead lines are still used to form part of the design, but the imagery is primarily a painted one.

Panel of stained and painted glass with the scene of the Clemency of Trajan. The scene is depicted as though seen through an architectural setting. Above the four pillars of this setting is a scroll supported by amorini with an inscription in verse upon it. In the centre part of the bottom of the panel is a coat of arms (azure, a fleur de lys in base and two stars in chief, or; with full achievements and crest within an oval wreath). Across the bottom of the panel, interrupted by the coat of arms is another inscription. Beneath the right hand part of this inscription is the signature SK and beneath left hand part is the date 1628.

Executed in stained and painted glass, flashed ruby glass and blue and green enamel. Trajan is represented on a charge facing left. The widow kneels on the ground before the body of her son and looks up towards Trajan. The background is crowded with soldiers with spears and halberds. The right hand corner of the picture is missing and has been replaced with glass of contemporary date.

In the bottom right corner of the lower scroll is the monogram SK ('S' with a stroke through it).
At time of acquisition SK was thought to be 'Johannes Kachler (1597-1628)' who worked in Uri. A later hand has written 'Josua Klein'.
Dr. H. Lehman informed us that Klein was a glass painter in Altdorf around 1621, then in Rapperswill around 1637 and back in Altdorf around 1659.

The image on this panel is adapted from the engraving by Hans Sebald Beham (see Bartsch, 82 and object information file).

The Clenency of Trajan
The monuments of Roman jurisprudence contain many
examples of Trajan's legislation. Like the great statesmen
of the republic, he returned from the camp to the city to
take his seat daily on the tribunals with the ablest judges
for his assessors. He heard appeals from the highest courts
throughout his dominion, and the final sentence he pro-
nounced assumed the validity of a legal enactment. The
clemency of Trajan was as conspicuous as his love of justice,
and to him is ascribed the noble sentiment, that it is better
that the guilty should escape than the innocent suffer.

Panel of clear and flashed glass painted in brown/black pigment and with enamels. Depicting the story of The Clemency of Trajan. Swiss, painted by Joshua Klein in Altdorf or in Rapperswill, dated 1628.

The date of 1628 on the panel may be commemorating an event rather than a date of construction. 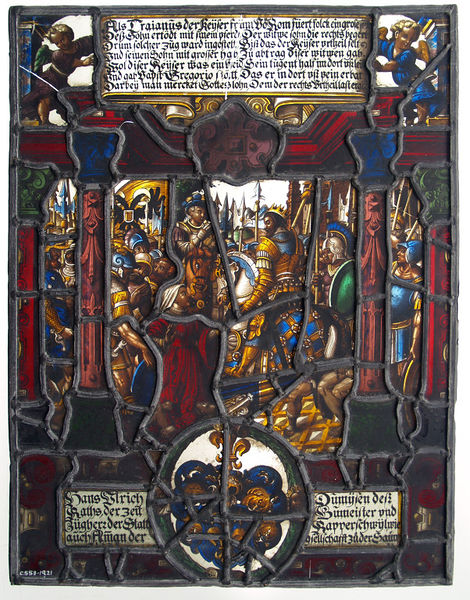