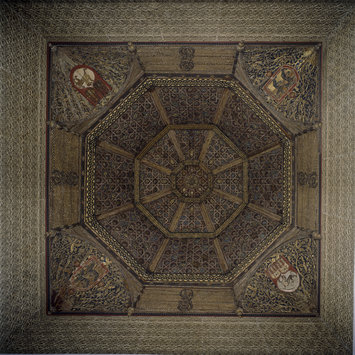 Wooden ceiling decorated with an all-over framework of geometric starburst designs. Octagonal and arranged in three zones radiating from a muqarnas boss at the centre. A more 'Gothic' section with four squinches provides the transition from the square hall to the octagonal dome.

A frieze of kufic lettering runs around the walls below the crown of the ceiling, however it does not spell true Arabic words.

Two more portions of plaster work 'pieces of stucco frieze with Arab inscriptions...from the lowest frieze of the Hispano Moresque ceiling' were presented by Messrs. L. Harris on 30th July 1909 (RF 3792/1909). A.B. Skinner explained on the acceptance papers 16/8/1909 that 'Portions of this frieze were missing, but all was received, which was thought to exist at the time - sufficient for the repeating design existed to allow the frieze to be completed by making plaster casts. Mr Harris subsequently obtained the pieces under consideration and offers to give them to the Museum.'
Displayed in the apse of gallery 48 by at 1926, until 1992

One of four surviving ceilings from the Palacio de Altamira in Torrijos, near Toledo, built for Guitiérre de Cárdenas, chamberlain to Isabella the Catholic, and his wife Teresa Enríquez, the queen's cousin. A good example of the taste for Mudéjar styles among the Spanish elite at the turn of the fifteenth and sixteenth centuries. The squinches contain the coats of arms of the Cárdenas and Enríquez families. The construction, design and decoration show continuation from the marquetry ceilings created for the Alhambra a century and a half before. (M. Rosser-Owen, 2010).

Description at accession:
"Vaulted ceiling of carved pinewood, painted and gilt; in some parts the painting is on a canvas priming. From a palace at Torrijos near Madrid, built for Gutierrez de Cardenas and his wife Teresa Enriquez, whose arms are shown in the spandrels.The ceiling is octagonal in plan, fitted by means of spandrels to a a square room. In the apex is a stalactite pendant within an octagonal panel, from which eight ribs radiate; the ribs are intersected by cross-bars, the surface being thus divided into sixteen panels, which together with the top panel are filled in with geometrical arabesque ornament enriched with leafy and floral designs; under the whole is a frieze of stalactite ornament. Each of the four slightly coved spandrels contains a shield of arms of the families referred to, on a ground of interlacing branches; between each pair of spandrels is a panel of matted ornament witha conventional S-shaped device in the middle. With the vault are portions of plaster work, representing parts of the frieze of the wall which supported the vault. Hispano-Moresque; late 15th century."

Carved, gilded and painted woodwork ceiling from the Palacio de Altamira in Torrijos (near Toledo)

P.85-87:
'Mudejar was used to create rich interior spaces, and some of the most spectacular of all Mudejar creations are marquetry ceilings. The V&A is fortunate to have in its collections one of four surviving ceilings from the Palacio de Altamira in Torrijos, near Toledo (p1.78). This palace was built for Gutierre de Cardenas (d.1503), chamberlain to Isabella the Catholic, and his wife Teresa Enriquez (d.1529), the queen's cousin. The couple are credited with introducing Isabella and Ferdinand. Gutierre arranged their first meeting, and when asked by Isabella which one among a group of men was Ferdinand, he replied 'Ese', 'That one'; for this lie was awarded the distinction of adding a floriated 'S' (ese in Spanish) to either side of his coat of arms, just as they appear in the ceiling. [Note 25: Letter dated 13 March 1956, from Beatrice Gilman Proske, Curator of Sculpture at the Hispanic Society of America, New York, to Miss Elizabeth Moses, Curator of Decorative Arts, M.H. De Young Memorial Museum, San Francisco; among the archival papers held at the Legion of Honor in San Francisco. My thanks to Melissa Buron for sending me copies of these papers.] Gutierre also deputized for the Catholic Monarchs at the surrender of the Alhambra in 1492. [Note 26: Harvey, L.P., Islamic Spain 1250-1500 (Chicago, 1990), p.322.] This noble couple was therefore at the summit of the social order, and the architectural decoration of their palace is revealing of the taste for Mudejar styles among the Spanish elite at the turn of the fifteenth and sixteenth centuries. It also illustrates how members of the Spanish nobility who were intimately involved in the conquest of Muslim lands favoured the Islamic style in their domestic environment.
Gutierre and Teresa's palace was probably constructed about 1490, soon after their marriage. It was built around a courtyard and had four corner towers, inside each of which was a Mudejar ceiling, all different though sharing the same stylistic elements. [Note 27: The palace was demolished between 1901 and 1904, though not before the four ceilings had been savaged and sold. The stucco friezes which crowned the walls below them were too fragile to be removed from the walls, so casts were made which allowed them to be replicated when the ceilings were installed in their new homes. Three ceilings from this palace can be seen at the Museo Arqueologico Nacional, Madrid; the Chateau Villandry in the Loire Valley, France;m and the California Palace of the Legion of Honor, San Francisco (inv. 46.16). The fourth is in the V&A (pl. 78) although not currently on display. An article on the decoration of the Palacio de Altamira, which described it as an 'architectural jewel' (p.346), was published in Por Esos Mundos, no. 87 (April 1902), pp. 344-7.] The tongue-and-groove construction of the ceilings was Islamic, continuing that of the marquetry ceilings created for the Alhambra a century and a half before, as was the conception of their decoration, based on an all-over framework of geometric starburst designs. The upper part of the V&A ceiling is octagonal and arranged in three zones radiating outwards from the muqarnas boss at the centre, covered with eight-pointed stars, and brightly coloured in red, blue and gold. A muqarnas frieze runs around the edge of the `Islamic' part of the ceiling, separating it from the more 'Gothic' part, where four squinches at the corners provide the transition from square hall to octagonal dome. The squinches contain spiky vegetation, surrounding the prominent coats of arms of the Cardenas and Enriquez families (compare p1.100 for the Enriquez arms from a slightly later palace in Seville). These spiky flowers are also incorporated within the starburst decoration (see frontispiece) and seem intended to represent thistles, cardos in Spanish, a punning reference to the name `Cardenas'. Running around the walls below the crown of the ceiling are stucco panels which feature half-palmettes and curling leaf-forms like those on the Alhambra's plasterwork, and a frieze of Kufic lettering, though this does not spell out actual Arabic words. Altogether, from the point at which the stucco decoration starts to its pinnacle, the ceiling took up more than half the total height of the tower in which it was installed; the walls below would have been hung with carpets or tapestries, also decorated with Islamic designs. The ceiling would have been a magnificent spectacle when viewed in its original space, and the overall impression strikingly Islamic.'

Enrique María Repullés, "El Palacio de Torrijos", Resumen de Arquitectura (Madrid, 1st October 1894), p. 101-105
Bevan, Bernard 'Woodwork', Spanish Art (Burlington Magazine, 1927) p. 89, Woodwork-Plate IB
'The most ingenious of the Mudejar ceilings were those called 'media naranja' -half orange, in which the intersection of the beams produced the effect of a dome. One of the finest in Spain, though it has suffered from repeated restorations, is that in the Hall of the Ambassadors in the Alcazar of Seville. It is made of cedar wood, the myriad ribs inlaid with box, while the interstices between the panels are filled with tiny mirrors. A scarcely less beautiful example is over the staircase in the Casa de Pilatos, the ancient home of the Riberas; and in the South Kensington Museum is a late fifteenth-century 'media-naranja' [Plate I-B] from Torrijos (some twenty miles west of Toledo) made for Gutierrez de Cardenas and his wife Teresa Enriquez, whose arms appear in the spandrels.' 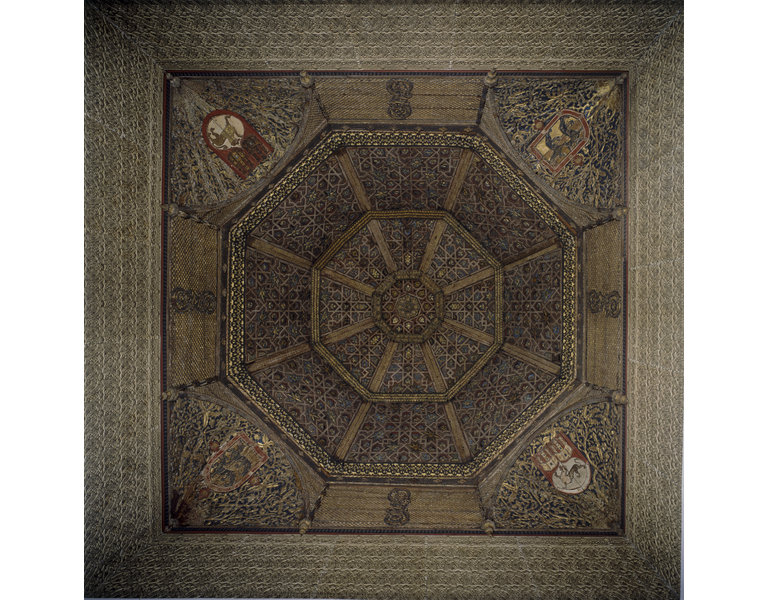