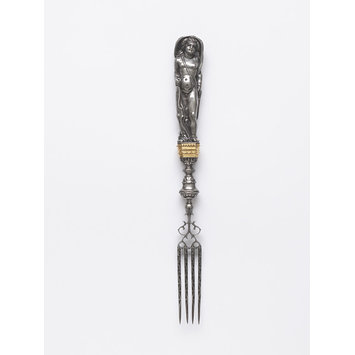 Fork of chiselled steel with gilt ferrule, the handle on the form of a standing cupid leaning slightly to the left and draped in cloth, supporting an upright bow on the ground in his right hand. His left hand rests on a quiver full of arrows at his left hip, slung from his right shoulder.

Between the ferrule and the tines is a spool shaped shaft and pierced ornament. The fork has four tines each facetted to depict a running vine.

This fork and its accompanying knife were probably part of a larger set. The restrained and almost parallel profile of the figures on the handles and manner in which the design of the grapes and vines has been rounded at the ends, suggests they were designed for use rather than simply as ornament.

The handles are unusual. They take their inspiration from carved ivory, horn and wooden examples but are in steel. Moreover, whereas one might expect the steel to be cast, it has in fact been chiselled. The fineness of the work suggests the hand of the sword hilt maker.

Ebony, ivory, fish skin, tortoiseshell, amber, bone, horn and shell were all popular for decorating cutlery. Although cutlers were required by their guilds to be able to make a complete knife, handles of carved ivory, silver, bronze and glass were usually imported or made by specialist craftsmen.

Cupids, whose attributes include the bow and a quiver filled with arrows, were common decorative features of the 17th and 18th centuries. As symbols of love and temptation they served as a reminder, when used on cutlery, to control one's desire to over indulge. They may also suggest the cutlery was a marriage gift.

Before the mid-18th century, cutlery was a portable personal possession. Many were sold in protective leather cases that might contain only a single knife, fork and spoon. Large sets kept permanently for use in one house, even one room, were a later feature. You took your own cutlery on the road. To reveal a fine and expensive knife and fork communicated your wealth and taste to your host in much the same way as your clothing or jewellery.

17th century journals give a sense of the portable, personal and financial value of cutlery, particularly when they concern reports of highway robbery. In these accounts, which were particularly prevalent during wartime when underpaid soldiers were on the loose, the cutlery is itemised with the jewellery and finer fabrics. Hans Conrad Lang, of Isny in southern Germany, complained that his wife was held up near Achstetten, encountering several horsemen, "and all the rings on her fingers, her belt, her cutlery and two ducats were taken." Buttner, a pastor from Altenheim was "caught and robbed by an Imperialist patrol and lost 12fl. in cash, a new hat, and a knife and for inlaid with silver." Sautter, a priest from Ulm, described how he was attacked by two soldiers who took his money while a third searched him and "found a cutlery set on me , knife, fork and spoon, wuich might have been worth 7 or 8 R [Reichstaler], my rosary, my gloves, and he took them all."

Fork of chiselled steel with gilt ferrule, the handle in the form of a Cupid, possibly Germany, 1660-90 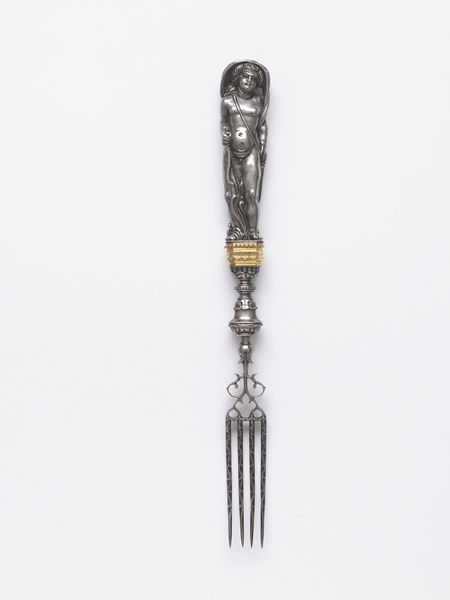