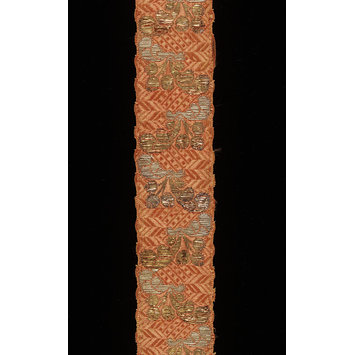 Silk ribbons were used for a multitude of utilitarian and decorative purposes in 18th-century fashionable dress – for the ornamentation of women’s gowns, for garters to keep up stockings, for lacing for stays and shoes, for tying back wigs and ornamenting elaborate hairstyles and headdresses. Diderot’s Encyclopaedia in 1772 described these uses succinctly in its definition of ribbon: ‘a flat, narrow and thin fabric, used to tie, edge or ornament, for garments as well as furnishings’. Ribbons were subject to changes in fashion, just as wide silks were.

Ribbons could be bought at fairs, from travelling pedlars or from the high class retailers of major cities such as Paris (e.g. the marchands merciers of the Faubourg St Honoré which is still the city's luxury quarter today). These retailers stocked large quantities of ribbons of all sorts - from the simplest to the most elaborate - to sell to their customers, French ribbons being complemented by Dutch, Flemish, German and Swiss goods.

Coral-coloured ribbon (faded from a bright salmon red, still evident on the back of the fabric) with a geometric textured weave in the ground, and a sprig pattern created by metal brocading wefts in a comber repeat. The sprig is composed of berries and foliage in two different qualities of gilded silver thread (flat - lame, and wound round a beige-coloured silk core - filé). the edge is wavy, not quite scalloped. The pattern displays a very economical use of metal, there being very little floating across the reverse side. XRF analysis confirms the metal thread is predominantly silver, with small amounts of copper and gold.

Acquired for the Museum for 9/- in 1871, on recommendation of Sir M.D.Wyatt, from Mr Murray Marks of Oxford Street London as part of a collection of textiles. Thought to be 18th-century French (Lyon) at that time. Of the collection, Wyatt wrote that it was important because of 'the number, variety and beauty of the bulk of the specimens. It will form a most excellent sequel to the early textiles obtained from Dr Bock' (Art referee report, 47257, 8 December 1870).

The weaving of silk ribbons (sometimes called narrow-weaving) was carried out in a number of European cities in the 18th century, notably in the French cities of Lyon, Paris, and Tours, alongside the production of elaborate wide silks for furnishings and dress. Saint-Chamond and Saint-Etienne in the Stéphanois, some 40-50 kilometres south of Lyon, gradually became the main centres of the production of the most fashionable and complex silk ribbons, such as this.

In France, ribbons were generally between 3 and 22 cm wide, guild regulations stipulating they had to be less than 40cm in width, in other words at least 10cm narrower than a dress silk. The engine loom (métier à la barre), first used in 1604 in Leiden, was only adopted in France from 1736 and officially promoted by the French government from 1769. It allowed the production of eight or more ribbons at the same time on the same loom, but was only suited to the weaving of simpler ribbons initially. It began to be used in Saint-Chamond and Saint-Etienne from 1750. 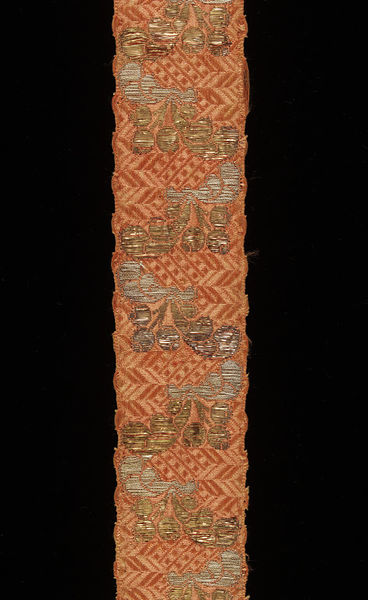