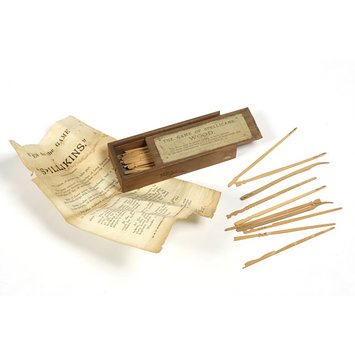 Design: wooden spillikins with hooks
No. of pieces: 29 and 2 hooks

Title on box lid:- THE GAME OF SPELLICANS WOOD. This game may be played by two or more persons. The game does not only afford a source of amusement, but at the same time conveys instruction with it.

The label is green printed in black with the name. It is similar to those labels used by John Jaques & Son Ltd and the company did make these games.
It is very similar to Misc. 194-1976.
There is a separate instructions sheet headed RULES FOR THE GAME OF SPILLIKINS which is marked with HPG & Sons Ltd, and produced by HP Gibson.

Antique Toys and their Background, p. 125.

No. of Players: any
Equipment required: 29 spillikins with 21 (9 pairs and 1 trio) marked in red ink with Roman numerals which are not consecutive, 3 pairs have no numbering
2 hooks
blue/green printed instructions sheets
wooden box

Spillikins and Jackstraws are similar games which test the player's skill at removing straws or small sticks from a pile, one at a time. and without disturbing any of its neighbours. Any number may play.

The game originated in China and is played with a set of about 30 ivory, wood, or plastic strips. These thin strips have carved heads representing animals, people, and other shapes. There is also a carved hook for moving the strips.

The order of play is determined by a throw of dice or any other agreed means. The past person in the playing order then takes all the spillikins in one hand and drops them on to the table or floor. He must not interfere with any after they have left his hand.

At his turn, each player takes the carved hook and attemptes to remove a pillikin from the pile without disturbing any of the others. Once a player has started moving a particular one, he is not permitted to transfer his attack to a different one. If he is successful, he keeps the spillikin and tries to remove another one from the pile. A player's turn continues until he disturbs a spillikin other than the one he is attacking. Play continues in this way untill all the spillikins ahve been taken.

Scoring. Each spillikin has a points value and a game is won by the player with the highest score. Spillikins that are generally fairly easy to move have a low value and more elaborate and difficult to move ones hve a correspondingly higher value.

JACKSTRAWS
This variant to spillikins is also known as jerkstraws, juggling sticks, pick-up sticks and pick - a - stick
It is played with about 50 wood or plastic sticks or straws. These are usually about 6in long, rounded and with pointed ends, and coloured according to their points value.

The rules of play are the same except players remove the sticks with their fingers or in some versions may use a stick of a specified colour after they have drawn one from the pile.

MAGNETIC JACKSTRAWS
This is a modern form of jackstraws in which the straws are made of metal and must be removed from the pile by means of a small horseshoe magnet. 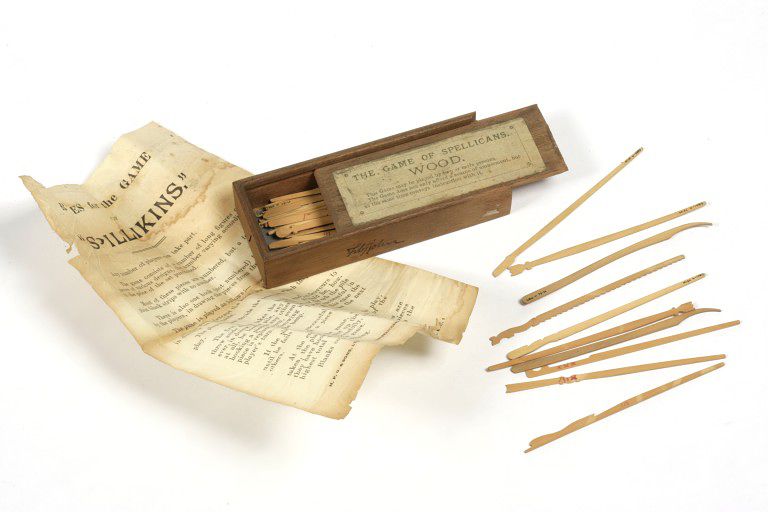