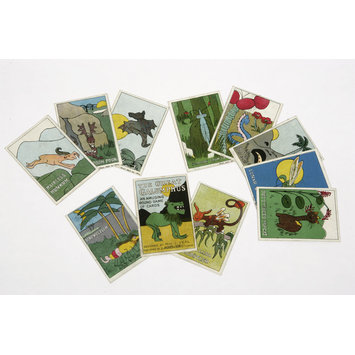 The Jaques company has been in existence since 1785 and has continued as a family business through seven generations. Among other things, Jaques has been responsible for introducing croquet to Britain, designing the classic Staunton chess pieces and the invention of both the Happy Families card game and table tennis. During World War II the company was commissioned by the British secret services to manufacture prisoner of war escape kits in the form of various games.

Design: printed card, printed in colours on one side to show various comic animals which have names; on the reverse is a pattern printed in very dark blue.

On the outer sleeve of the box is a dark blue oval label which bears the name of the retailer - 'HARRY HUBBARD/SPORTS/SCOUT & GUIDE/OUTFITTER/
GILLINGHAM/KENT'.
The game originally belonged to the donor's cousin, Canon Paul Davison (1915-1992) who grew up in Gillingham

No. of Players: 3+
Equipment required: 48 cards arranged as 11 sets of 4, with 4 individual privilege card
title card should be attached to the front of the box

Rules:
RULES FOR THE GAME THE GREAT GALUMPHUS
A new and amusing card game illustrated by MISS JESSIE VEAL

Any number above 3 can play, the best number being 5 or 6. The Pack consists of 48 cards, 4 of which are Privilege Cards, marked with a Star, to which certain rules apply.
Their names are:-
Crowned Cornubian The Great Galumphus
Tasselled Snort Hound Bubbling Water-Hog
The remaining 44 cards consist of four each of eleven subordinate designs from which the players endeavour to form their sequences and thereby win the game. Their names are as follows:-
Pushfoot Polliwog Climbing Chumtrunk
Painted Pooh-Pooh Cissling Sand-Snapper Hairless Hunkum
Flying Umbratunk Long Eared Scootler Scru-Wuzzium
Lunar Lumpkin Putty Faced Popcat Spotted Sniffle-Grub
One player must act as dealer, and at the start this should be decided by dealing the cards round, the player to whom the first star card falls, making him the dealer.

The pack must be well shuffled and cut, and the dealer then deals one card to each player, including himself. These are left face upwards on the table until every player clearly sees what the cards are. They are then turned face downwards in front of each player.
The dealer then turns up the top card of the pack reading aloud its name, the object of each player being to remember what the various turned cards are, and claim them when read out, the player who does this first correctly, placing the claimed card face up in front of him on the table. In claiming the owner should be called by name or by placing the hand over the card so claimed.
The cards whether claimed or not, after being called, are replaced at the bottom of the pack by the dealer.
Any player may claim his own unturned card if he wishes to, but cannot claim more than one card, each call. After any card is claimed (correctly or not), a fresh card is dealt to take its place, the dealer calling it by name and all players having an opportunity of seeing it before it is turned down in from of the player it is dealt to. The old card (if incorrect) is returned to the bottom of the pack.
If any player makes a wrong claim he has to take over the deal.
When a player is acting as dealer he cannot claim cards except under the special privilege he has should he turn up the Star card Bubbling Water-Hog.
In replenishing claimed cards from the pack, should a Star card turn up it is disregarded as such, and is at once placed at the bottom of the pack by the dealer.
A Star card can never be held by any player, so that they never leave the pack, recurring from time to time as the cards are read out.
If two (or more) players are at fault when claiming cards, the player who calls first takes over from the dealer, the others escaping penalty for their mistake. The decision as to this, rests with the dealer.
If in the course of called the cards, two (or more) Star cards follow in succession, only the first carries its privilege for the time being, but when this happens, any duplicates in any of the players' claimed cards are to be returned from their rows, to the dealer, who places them back at the bottom of the pack to be recalled, when reached.
The winner of the game is the player who is first able to claim and hold in his row of upturned cards one of each of the whole eleven different designs in the pack. For a shorter game and to make it easier for very young players the number can be reduced from 11 to say 7 or 5.
It is a disadvantage to be dealer, because while doing so, a player loses opportunity of claiming, but as the deal passes whenever an incorrect claim is made, it forms a check against reckless claiming when players do not happen to remember what the cards for the time being are.
While a player is acting as dealer all his attention must be devoted to see that claims are properly decided upon, and manipulate the cards, his decision being that of an umpire to be accepted by all.
The privilege rules applying specially to the Star cards when called are as follows:-
THE GREAT GALUMPHUS. Each player in turn round the table may claim any one of the unturned cards, but without penalty, if incorrect. The dealer is to decide if the claims are correct, without exposing the claimed cards to the other players.
CROWNED CORNUBIAN. All turned cards are exposed, to refresh the players' memories, but they must be turned down again before play recommences.
BUBBLING WATER-HOG. The dealer, alone, may claim any unturned cards on the table he can correctly name and without penalty, for those that are wrong, these latter being left where they are.
TASSELLED SNORT HOUND. All unturned cards on the table are moved along one place, to the next player on the left. 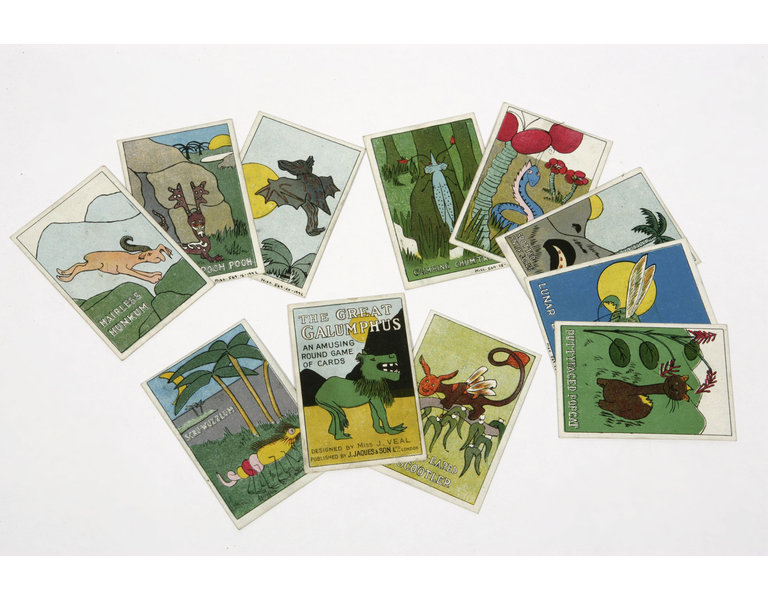