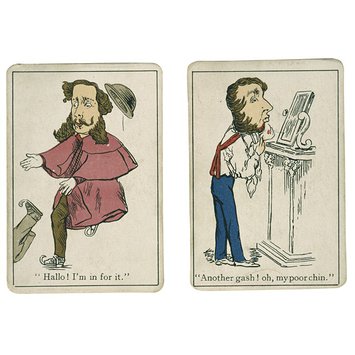 John Jaques & Son Ltd first introduced the game of Snap in 1866, using illustrations of grotesque characters as he had for Happy Families. Like Happy Families, Snap cards are arranged in groups of four, but each card in a group bears the same picture. The rules of Snap that we use today were known as Easy Snap in the 19th century. The usual way to play then was to have players turn up cards on their own separate piles rather then on a central one. Another version was Speed Snap, where instead of taking turns to play their cards, everyone turns them over at the same time.

John Jaques introduced the game of Snap in 1866, using illustrations of `grotesque characters' as he had for Happy Families. Like Happy Families, Snap cards are arranged in groups, but each card in a group bears the same picture

Rules:
The basic rules for the game of SNAP.

Like Happy Families, Snap cards are arranged in groups, usually two but may be more, but each card in a group bears the same picture.
The object of the game is to win all the cards.

One player deals out all the card, one at a time and face down. It does not matter if some players have one card more than others. Each player puts his cards in a pile face down in front of him and the players are not allowed to look at their cards.
The dealer or the player to his left turns over the top card of his pile, and the next player does likewise and so on around the players until any player sees that the cards on the top of any two face-up piles are the same.
The first player to shout SNAP when there are matching cards collects both of these and puts them face down on the bottom of his pile. Players now continue to turn the cards over as before, beginning with the player to the left of the last one to turn over.
SNAP POOL, if two players shout `snap' together, the matching cards are put face up in a pool in the centre. Players then continue to turn over cards, and the pool is won by the first player to shout Snap Pool when the twop card of any player's pile matches the top card in the pool.
When a player runs out of face down cards he simply turns over his face up cards when it is his next turn.
PENALTY, there are different rules for when a player calls `snap' in error:-
1. the player gives one card from his face down pile to each of the other players
2. the player's face down pile is put into the central pool to be won like an ordinary snap pool.

The game is generally played with forfeits, and the rules are simple enough for young children to enjoy playing. The cards are dealt equally among the players, face down and the dealer starts by turning over his or her top card to reveal an illustration. The next player to the left does likewise and, if that card matches the first, he or she `snaps' the first player, who pays a forfeit by giving up one counter.

Should the third player also have a similar card, he or she `snaps' the second player, who then has to pay a double forfeit by giving up two counters. The game continues until all the players but one have lost their forfeits and that remaining player is declared the winner. The game may be played without the forefeits.

EASY SNAP
This version is particularly suitable for very young children. Instead of having individual face up piles, each player plays his cards into a central face up pile. Players shout SNAP when the top two cards are of the same value.
SPEED SNAP
In this faster version of the game, players still turn their cards up one at a time but all players do so together. 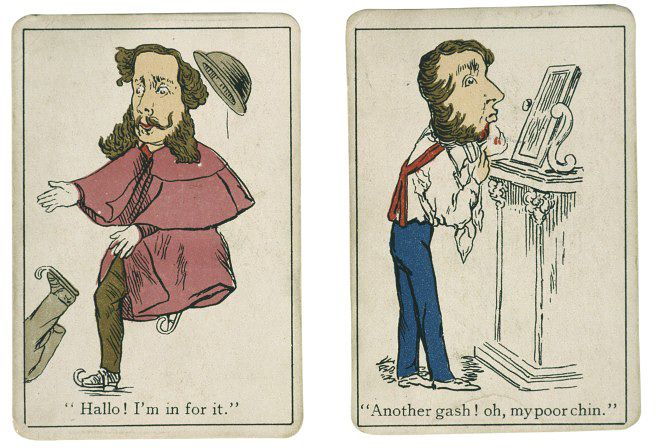