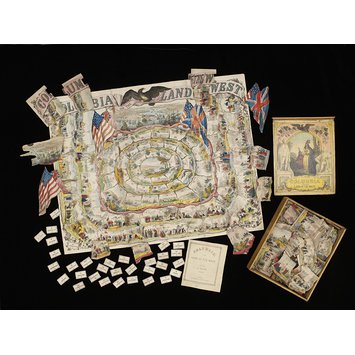 This is a very unusual board game. There is a playing surface that can be used, but this also acts as a guide sheet for a dissected puzzle. It could be bought as a game in a slipcase for five shillings or dissected in a box for 7s. 6d. The game begins with the discovery of America by Christopher Columbus in 1492, and ends with the Treaty of Independence of 1782. It can be played either historically or topographically.

There are 36 dated entries in the rules booklet that describe the history of North America and the United States from 1492 to 1782. There is also a list of 38 states and capitals, including six that are Canadian. They were still British possessions at the time of the game.

Dissected puzzle of 75 pieces (2 are missing), paper mounted on wood. The same picture is a board game, a hand coloured lithograph mounted on linen. The subject of the starting square is 1492 - Columbus and the ending square is 1782- Treaty. There are 37 small card pieces with the names of the capital cities of the American States and the Canadian Provinces, and one small card lettered Manhattan 1613. There is a instructions booklet and everything is contained within a wooden box with a sliding lid bearing a pictorial label with the title of the game/puzzle.

Hand-coloured lithograph on linen and wood

see rules for details of the use of the cards of which there are a further 38 giving the names of capital cities of Canadian provinces and American states.

Rewards: on winning, the pool ; on finishing a counter from other players
Forfeits: counters into the pool and payment to other players

No. of Players: 2,4,6,8
Equipment required: dice or teetotum, counters, the circles of the game dealt out to each, see rules.

The scenes surrounding the sheet are selected from the history of America, commencing in 1492 and ending with the treaty of Independence of the United States in 1782.
Four, six or eight persons may play at this very amusing and instructive game.
The cardboard with the dates and events, must be cut into pieces and the pieces after being well mixed, divided amongst the players, the dealer taking the odd ones, should any remain.
Counters are to be distributed to each player in the usual manner.
The dealer may commence the game by throwing the cube marked 1 to 6. These numbers, it will be perceived, are also on the little bits of cardboard under the event. If the dealer have any one of the same number amongst his cards as turned up, he may place it on the corresponding compartment on the picture, but if he have none of the number turned up, he must pay one counter to the pool. Should he have two or more of the number turned up, he must only place one, choosing that he thinks most advantageous.
The next player on the left hand of the dealer may then proceed in like manner, either placing one of his cards or paying one counter to the pool if he have corresponding numbers, and so on all around the table until a player can complete one of the two outer circles on the picture by covering the last of the eighteen scenes, when he may take the pool and the game is ended.
If any one or more of the players part with all their cards without completing a circle, the other players must pay one counter each to him or them.
The game becomes very exciting when each of the two circles are very nearly completed, and the number of the players is reduced to two or three.
A six sided Teetotum may be used instead of the cube if preferred.

The centre of the sheet, it will be perceived, contains the names of the States, with the chief city of each.
Counters must be distributed in the usual manner.
This version of the Game may be played by any number of persons.
Each player must put two counters into a pool.
The cards must be divided and put into a reticule or bag.
The first player may draw a card from the bag, on which is printed the name of a city, and if he can tell the state in which it is situated, he may place it on the corresponding compartment on the sheet; but if he cannot tell, return it to the bag and pay one counter to the pool. The next player may them proceed in the same manner and so on all round the table.
The first player who completes one of the three circles wins the game and may take the pool.

*There are 36 dated entries in the booklet describing the history of North America and the United States from 1492 to 1782 and a list of 38 States and capitals including 6 which are Canadian , still English possessions at the time of the game.

Hand coloured historical race game and dissected puzzle, The Land of the West, published in England by E & M A Ogilvy in about 1850 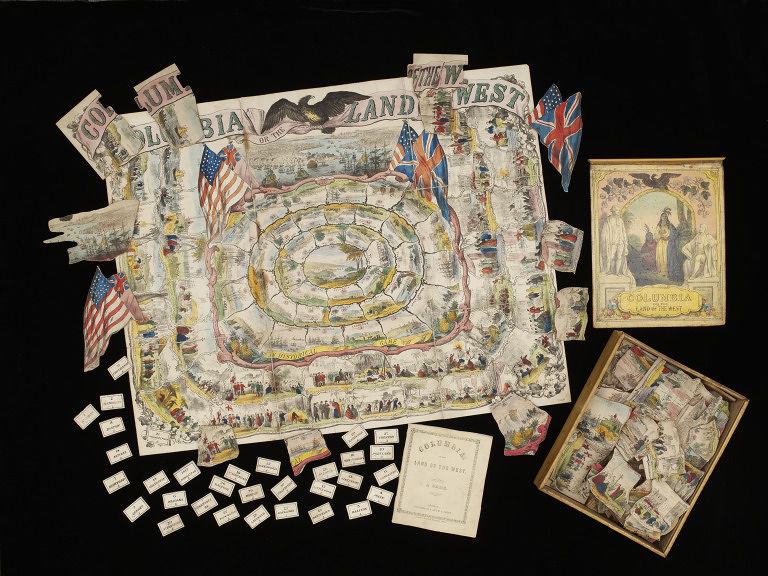