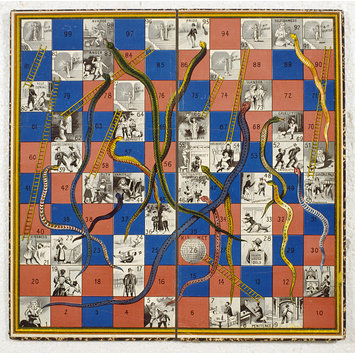 Kismet means fate or destiny. The game was intended to show children that, by being good and obedient, life would be rewarding. Bad behaviour would, however, be punished.

Forty-two of the game's squares show black and white illustrations on moral themes. There are 13 snakes and eight ladders connecting these squares. The snakes show that wrong-doing and vices lead to punishment while the ladders all lead to virtue. The game was designed in England and the majority of the illustrations reflect English themes. The actual printing was done in Bavaria, Germany, which was a common practice in the late 19th century.

The game is printed with forty-two squares that show black and white illustrations on moral themes. The rest of the squares are colored in red and blue. There are thirteen snakes and eight ladders connecting these squares. The snakes show that wrong-doing and vices lead to punishment, while the ladders all lead to virtue. The majority of the illustrations reflect 'English' themes.

Chromolithograph on paper and card

GLOBE SERIES OF GAMES
MADE IN BAVARIA
REGISTERED TRADEMARK

Copyrights for this game were registered by Emil Oppenheimer and Ignaz Sulzbacher between 1895-1904 and the games appeared as part of the “Globe Series”. The Museum of Childhood’s archives do not have further information on the game’s provenance other than its acquisition in August 14, 1981. It was assumed that the game was designed in Britain and manufactured in Bavaria, Germany. Nuremberg was the main city of toy and game production for export in the mid-nineteenth century, and there were many publishing houses for children's books in Nuremberg. The games were produced in a variety of languages, such as German, English, Spanish and French, and widely distributed from Bavaria, Germany. In Nuremberg, around 1900, there were about seventy trading houses, which sold millinery and games to customers abroad until the First World War, by which time they had already established their own company branches and sample warehouses in other countries.

The "Globe Series” was a trademark of the export company Oppenheimer & Sulzbacher in Nuremberg established in 1883. Under this brand, the company commercialized pictures, decals, stationery and games and exported mainly to England and the USA. Not only did it give orders to manufacturers, it also secured its own patents and trademarks just like any other large export company in the trade at the time. This might have been the case for “Kismet" as well, that it was commissioned by Oppenheimer & Sulzbacher and marked with the brand "Globe Series of Games”. The company Oppenheimer & Sulzbacher remained in Nuremberg as an export business for stationery, millinery and games until 1939, then was dispossessed by the Nazis as its owners were Jewish and then acquired by Gustav Funk. Another company J. W. Spear & Söhne suffered a similar fate in Nuremberg. The marking "Made in Bavaria" states that the game was printed in Nuremberg and was probably also developed in Nuremberg by an unnamed company.

Cardboard game, Kismet (Snakes and Ladders), made in Germany about 1895 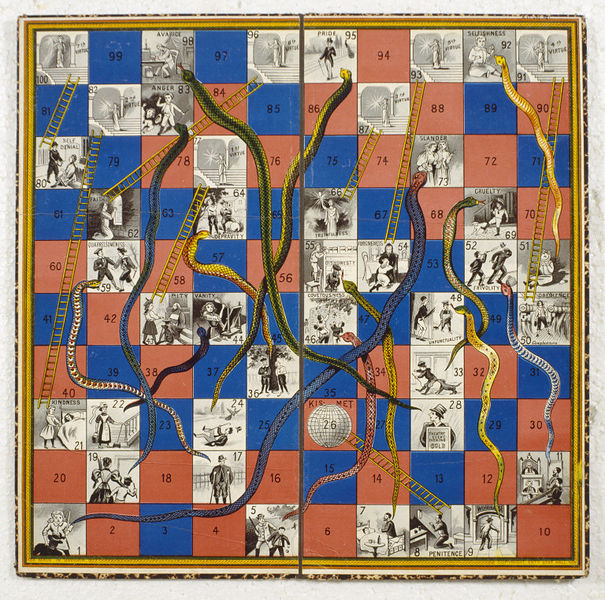