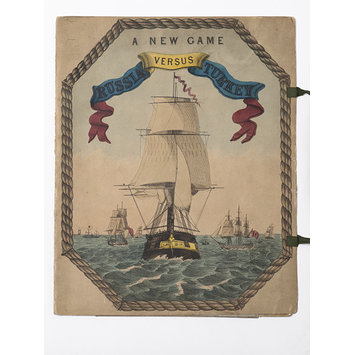 The armed forces and war have inspired a number of games. This perhaps followed the late 18th-century tradition of celebrating the exploits of king and country in board games. Strategy games were naturally the easiest to transform into battle games of all types. Men at war, be they soldiers, seamen or pilots, would play games in their spare time, re-enacting famous victories. They often created their own simple boards from paper and pencil.

This game was inspired by the Crimean War of 1853–6. The playing sheet illustrates the two sides in the war. In the centre on each side is a port, with Turkey on the left and Russia on the right. Players, either Turkish or Russian, start from the ports and have to go to the enemy one by a devious route filled with hazards that are marked on the playing surface itself. The original cost of the game was 1s. 6d. This was the price for the coloured version.

Inspired by the Crimean War; board sheet shows in the centre on each side, a port and that on the left is Turkish and on the right Russian. Players, either Turkish or Russian start from the ports and have to go to the enemy one by a devious route filled with hazards marked on the playing surface itself
cost - 1s6d (coloured)

Also listed are other games by Reeves
A Scriptural, Historical and Geographical Game, 1s.
The Game of Comic Composition, 1s.
The Prophetic Index; or Path to Matrimony, 1s.
Fortune Temple, 1s.6d.

Forfeits: payment into the pool following directions on the playing sheet; backward movement and losing turns
No. of Players: any

Rules:
1. This War Game may be played by any number of persons, who must be equally divided into Russians and Turks and be seated round a table, one Russian and one Turk alternately.
2. Each player must be provided with some small article as a marker to denote his position in the game, which, previous to commencing hostilities must be placed on the Fortification in the Centre - the Russian Players on the Russian Port and the Turks on the Turkish Port.
3. Each player to be provided with counters, to pay fines, pillage etc which will be demanded of him on his voyage, and pay two into the Pool at commencement.
4. One of the Russian aggressors will take his departure from the centre by spinning a totum (numbered from 1 to 6 or 1 to 8) on the table, and according to the number turned up will move his marker so many spaces forward in the spiral voyage towards the Turks.
5. The turk sitting next, observing the Russian movement will spin and move in like manner leaving his port towards the Russians, and so on in rotation.
6. If a Russian, as h proceeds on his voyage attacks a Turk, by attempting to occupy the same space, he will receive a Broadside from the Turk, and be compelled to remain where he was until his next turn. In like manner, if a Turk attacks a Russian, he will receive the same damage, but several players may occupy the same space, provided they are all in the same party, viz. all Turks or all Russians.
7. The Victory will be obtained by a majority of the Turks or a majority of the Russians first taking possessions of the enemy's centre Fortification who are entitled to divide the Pool as Prize Money.

Also listed are other games by Reeves
A Scriptural, Historical and Geographical Game, 1s.
The Game of Comic Composition, 1s.
The Prophetic Index; or Path to Matrimony, 1s.
Fortune Temple, 1s.6d.

Coloured lithographed board game, Russia v Turkey, published in England by J A Reeves about 1853

CGGoodfellow, The Collector's Guide to Games and Puzzles, Apple Press, 1991 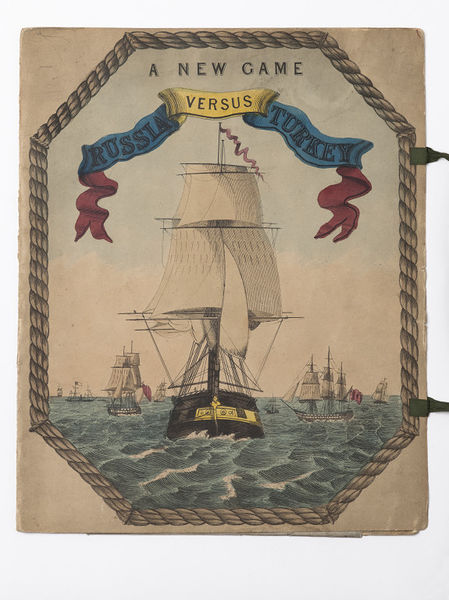