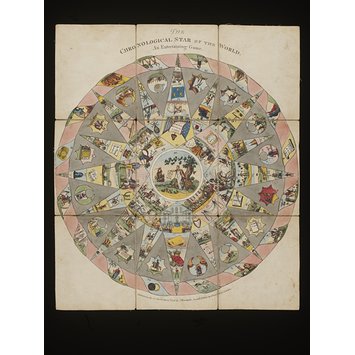 The Chronological Star of the World, An Entertaining Game

Design: engraving, coloured by hand
9 sections mounted on linen
showing a circle with a star pattern of 8 large points alternating with 8 small points, with crescent and star shapes
a ribbon pattern around outer edge
No. of squares: 109, all illustrated and numbered
Squares titled: none
Subject of starting square: Garden of Eden
Subject of ending square: Abolition of Slavery
No. of Players: any
Equipment required: teetotum, markers and counter

Rules placement: none, probably within a booklet

Rewards: not known, however, there would be a kitty or pool with each player having a given number of counters for rewards; forward movement.
Forfeits: payment of counters and backward movement

1. Garden of Eden
2. Noah's Ark and the Great Flood
3. David and Goliath
4. fountain or domed pillar, shrine
5. queen in a chariot or wagon with standard and soldier
6. Flight into Egypt
7. man in red with spear
8. scroll with the letters A to I
9. man in blue with woman in red
10. water with fireworks or possibly Moses in the bullrushes
11. sailing boat
12. man in red and blue with pole or lance
13. man standing in green with a man in the green part
14. two men fighting
15. burning bush
16. walled town
17. man playing a harp
18. gold coins
19. house being built, with scaffolding
20. knight on horse with tent in background
21. men building a house, one with a wheelbarrow
22. eclipse of the sun
23. teacher/orator/prophet in red and blue with scroll
24. eclipse of the sun
25. man in red and blue holding lute
26. king on a throne (in crescent)
27. sword and chalice
28. man on horseback, galloping (in crescent)
29. man on horseback in stockade behind (looks like a Hussar)
30. sheets of paper with one marked SOLON'S LAWS (in star)
31. man collapsed on chair
32. man being knighted, or a stage play of same with red curtains (in star)
33. sailing boat
34. astronomer, possibly Gallaleo
35. sheets of paper
36. three soldiers, appear to be Spanish but setting looks Middle Eastern
37. burning town
38. soldier fighting native, appears to be Roman
39. fighting in a building
40. woman on stage
41. colonaded building
42. town
43. man on chains and leg irons
44. burning town
45. destroyed buildings
46. king on a throne
47. man on horseback
48. bales of cloth
49. bell
50 coat of arms, with crown
51. Fleur d'Ilys
52. men in blue greeting soldiers from a ship
53. burning ships
54. tomb
55. man on galloping horse
56. knight on horseback
57. crown resting on a red shield
58. scroll with the numbers 1 to 0
59. man with shield and sword
60. men in battle scene
61. men marching in desert scene
62. cone in brown and white, may represent obelisk or even sugar
63. scales
64. windmill
65. blue flag with three gold crescents
66. star with multiple points (similar to the star on the Nuremburg House)
67. cannon, rifle, shot and gunpowder barrel
68. man in orange holding flag similar to that in 65.
69. playing cards
70. printing press
71. battle with horse and foot guards
72. battle of footguards before a building
73. letter/envelope in gold
74. battle footguards and horseman
75. ship sailing near land
76. book and quill
77. native leader/king
78. troops marching, appear to be Turks
79, ship sailing between two land points
80. ship's cannon mounted on wheels
81. raised flag, white with red X
82. man in blue landing from ship's tend with ship in the background
83. telescope
84. sheet of paper with AIR PUMPS INVENTED
85. farm scene with shooting star or meteor
86. flag, white with black double headed eagle
87. mounted soldier
88. flag, white with double headed eagle but of a different design to 86.
89. battle scene
90. parliament or court scene
91. shield or mirror shaped as a shield draped with red cloth
92. white draped cloth with INOCULATION
93. king seated beside table
94. battle scene, probably General Wolf
95. destroyed buildings
96. clock face
97. white sheet with red central seal
98. flags and scroll with AMERICA DECLARATION INDEPENDENCE
99. hot air balloon
100. battle scene, men storming a city gate
101. crown
102. king, seated at table holding audience with another man
103. dove of peace
104. men landing from ships
105. battle scene, possibly Duke of Wellington
106. horse drawn royal coach
107. sea battle
108. defeated army relics, flag, cannon and drum
109. woman under tree with ship flagged FREEDOM n the background with a scroll lettered TO THE GLORY BRITAIN SLAVE TRADE ABOLISHED

The game should have a booklet which would provide the rules and a description of each square. These combine biblical and historical details with inventions and some scientific events.
John Marshall was at address from about 1805 to 1828. He was a great rival of Elizabeth Newbery.
See also the Infant's Cabinet of Fishes (Card Games)

The Chronological Star of the World, J Marshall, English, 1818 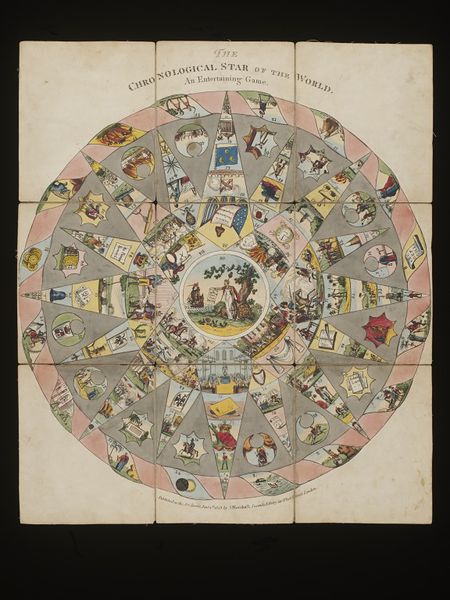