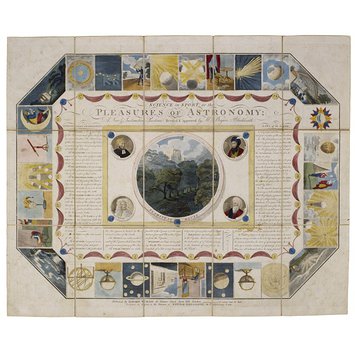 Science in Sport or the Pleasures of Astronomy

This 1815 board game is a reissue of a race game first published by John Wallis in 1804. The 35 playing spaces have portraits of astronomers and representations of astronomical phenomena. In addition to facts about the nine known planets and thier orbits, the game also features fiction (the Man in the Moon) , behaviour (the Studious Boy and the Blockhead), signs of the Zodiac, comets and rainbows.

Design: engraving, coloured by hand, 15 sections mounted on linen; numbered in a clockwise direction from the lower right hand corner.
No. of squares: 35
Squares illustrated: all
Square numbering: all
Squares titled: all in booklet
Subject of starting square: The Sun
Subject of ending square: Flamstead House, Grand Observatory

Rewards: extra turns and forward movement
Forfeits: missing turns, backward movement and the reciting of details from the booklet as listed
No. of Players: any
Equipment required: teetotum, markers (pyramids) and four matching coloured counters each

Rules:
SCIENCE IN SPORT OR THE PLEASURES OF ASTRONOMY A NEW GAME REVISED AND APPROVED BY MRS. BRYAN BLACKHEATH, LONDON PRINTED FOR E WALLIS 42 SKINNER STREET, SNOW HILL BY T DAVIS 117 MINORIES.
Booklet lists each medallion and indicates addition rules to playing the game which are not accounted for on the playing sheet. These are mainly missing turns or reciting information.

THE LAWS OF THE GAME
1. Each player must have a pyramid and four counters of the same colour.
2. The first player is to be determined by spinning the teetotum; the highest spinner to be the first player etc.
3. The first player must road the introduction aloud before he begins to play.
4. The first player is to spin and according to the number turned up on the teetotum, he is to place his pyramid: thus if he turns up 3, he is to place his pyramid at No. 3.
5. After the first player has spun, the rest are to spin in the order determined by Law 2.
6. The number turned up at each spinning is to be added on to that on which the players pyramid stands: thus if a player whose pyramid stands on No. 3, spins and the teetotum turns up 4, he must place his pyramid at No. 7 and so on till some one arrives at 35, who wins the game.
7. If the last spin does not exactly make up 35, but goes beyond it, the player is to go back as many as he exceeds that number and try his fortune again till some one arrives at the lucky number.
8. When a player is to stop one or more turns, he must place as many counters as he is to stop turns on the number he arrives at and when his turn of spinning comes he is to take up a counter instead of spinning and so on until they are all redeemed, when he may proceed.

Introductory Observations are engraved on the playing sheet.

*First published by John Wallis in 1804 and reissued by Edward Wallis. The 35 squares have portraits of astronomers and representations of astronomical phenomena. At the time, nine planets and their movements around the sun were known. Intermingled with facts are compartments dealing with fiction (the Man in the Moon) , behavior (the Studious Boy and the Blockhead), signs of the Zodiac, comets and rainbows, and astronomers.

Rules placement: on the playing sheet and in booklet printed by T Davis 117 Minories 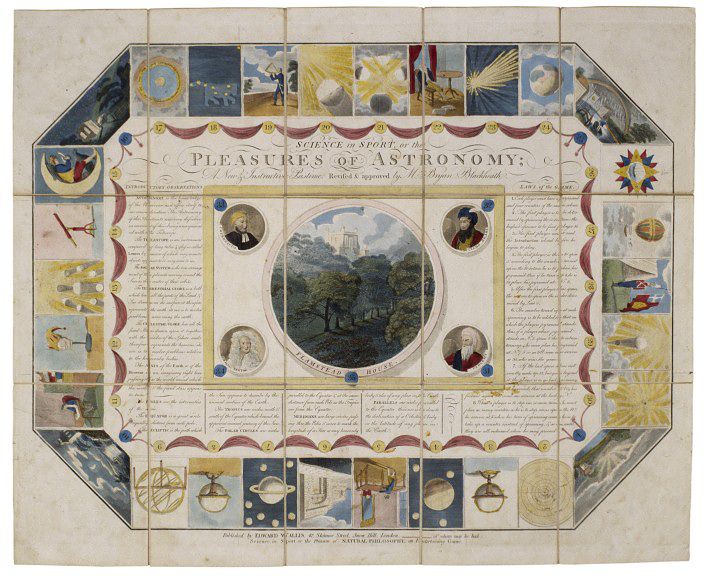