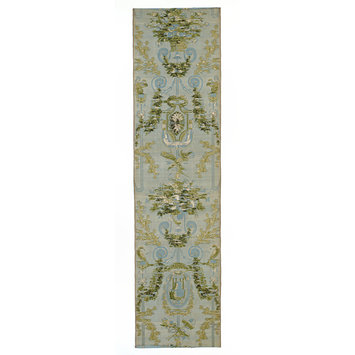 Carlos IV became King of Spain in December 1788, six months before the French Revolution. He was a great connoisseur of the arts, and had spent twenty years as heir to the throne amassing collections of musical instruments, clocks and paintings and indulging his passion for architecture. Even during the upheavals of the revolutionary wars outside Spain Carlos continued to spend money decorating his palaces.

The French Revolution resulted in great reversals of fortune for those involved in silk production. Yet Pernon et cie., official supplier to the French royal household until its suppression in 1797, managed to survive, weaving silks for major clients outside France. This length was probably designed for Carlos IV and is an exceptional example of the most technically complex of woven silks. An order book in the archives of the silk-weaving firm of Tassinari et Chatel, successors to Pernon, reveals that the design was made in 1797, annotated as 'probably made for Carlos IV of Spain'. Intriguingly, no trace of the delivery of this order to Spain has yet been found in Spanish Royal Archives.

General
Silk brocaded in silver and three shades of green on a sky-blue/turquoise ground. The silver at the bottom of the length is slightly tarnished, but most of the length still sparkles as when new. The pattern fills the width of the silk once, and its length once. It comprises one very long repeat in which floral arrangements in vase or basket alternate with a medallion or cartouche. Each component of the pattern is connected by scrolling garlands of flowers and pearls/round beads. The blue ground has an extra white weft woven throughout to lie immediately behind the silver brocading. Two different types of silver thread were used (frisé and filé), and there are three shades of green, one of which is tightly twisted (cordonnet) and therefore gives a textured effect. The design, weaving and materials are of the most remarkable quality, representing the greatest achievement and most expensive product of the eighteenth-century silk industry in Lyon. There is a small weaving error in the main motif which is about 5 feet from the bottom of the silk.

Pattern
From top to bottom, the pattern comprises:
1. a basket of flowers above a laurel wreath surmounting a cartouche which contains a rayed sun-motif. The lower half of the cartouche is framed by drapery above a quiver of arrows, a club, a single arrow and a scimitar (or curved, sword-like weapon). These crossed implements are attached to the cartouche by a cord ending in tassels. The scrolls on either side of the cartouche are hung with floral festoons on top of which sits a squirrel eating a nut seated on a draped platform on either side.
2. a basket of flowers connected in similar manner with an oval cartouche containing a classical urn with emblems appended, this time in the form of a rake, spade and shovel. The place of the squirrels is taken by two long-necked birds pecking at a butterfly.

The original Accession Register provenance suggests that this piece came from the Doge's Palace in Venice. Acquired for £30 in 1951 from Miss Catherine Purefoy Fitzgerald who lived in Oxford. Her correspondence with the Museum indicates that she believed that it had been bought by her grandfather, Revd. Anthony Chester of Chicheley Hale, Bucks. between 1850 and 1860 and that it had been a hanging belonging to the last Doge of Venice in 1791 (RP 51/3326; MA/1/F662)).

Historical significance: Significant as a fine example of the lavish furnishing textiles that were still being supplied to royal palaces outside France just after the French Revolution. Such an opulent textile would only have been made for a royal commission.

The silk was certainly manufactured by Camille Pernon et cie. of Lyon, and probably designed by Jean-Demosthène Dugourc who was responsible for designs for many royal objects at the end of the eighteenth and beginning of the nineteenth century. It was probably made for Carlos IV of Spain who was one known remaining patron of the silk manufactures of Lyon after the outbreak of the French Revolution. The Spanish royal family had begun patronising the firm in 1787 after they sent their designer François Grognard to the Spanish court in search of orders.

When acquired by the Museum in 1951, this silk was thought to have come from the Doge's Palace in Venice. However, an order book in the archives of the silk-weaving firm of Tassinari et Chatel, successors to Pernon, reveals that the design was made after the death of the last Doge in 1791. This order book contains a sketch of the pattern in 1797, annotated as 'probably made for Carlos IV of Spain'. Intriguingly, no trace of the delivery of this order to Spain has yet been found in Spanish Royal Archives. Both the silver thread and the colours of the silk have survived in a remarkable state of preservation, offering an unusually clear impression of the impact that such grandiose neoclassical schemes and motifs had in princely interiors. It is very much in keeping with the designs by Jean-Demosthène Dugourc for other Spanish commissions in the period, the most notable being those still hanging in the Billiard Room in the Casita del Labrador at Aranjuez.

Camille Pernon and silk manufacturing
Camille Pernon (1753-1808) was the third generation of a family of silk manufacturers based in eighteenth-century Lyon. He supplied furnishing silks to many European courts, including Russia and Spain between the 1770s and 1790s, including a number of prestigious hangings to Carlos IV of Spain while he was still Prince of Asturias. They were made for the Palacio Real in Madrid, the Casita del Principe at the Escorial and the Casita del Labrador at Aranjuez. Some of these textiles are still on the walls for which they were made. Between 1797 and 1798 Pernon was no longer supplying the French Garde-Meuble Royal which was suppressed by the Directory in June 1797 following the French Revolution and the fall of the Monarchy and not reinstated until 1804 as the Garde-meuble Impérial, set up under Napoleon. Indeed, the silk firm may well have survived the Revolution because of this continued Spanish custom. No trace of the delivery of this order to Spain has yet been found in Spanish Royal Archives.
The French Revolution resulted in great reversals of fortune for those involved in silk production.

Carlos IV of Spain as patron
Carlos IV (Charles IV) became King of Spain in December 1788, six months before the French Revolution. He was a great connoisseur of the arts, and had spent twenty years as heir to the throne amassing collections of musical instruments, clocks and paintings and indulging his passion for architecture. His collections filled his apartments in the Spanish royal palaces, and in his newly built retreats, just outside Madrid, the Casita del Principe at the Escorial and the Casita del Labrador at Aranjuez. Even during the upheavals of the revolutionary wars outside Spain Carlos continued to spend money decorating his palaces. He patronised not only Spanish silk manufacturers but also the pre-eminent French silk-weaving partnership of Camille Pernon et cie., from whom the Spanish royal family first commissioned furnishing textiles in the late 1780s.

Comparable pieces
(1) A comparable, but more faded, piece (325 x 74 cm) was for sale in Paris in 2009. (Aponem & Deburaux, Textiles XXXI, Drouot-Richelieu, Vendredi 3 juillet 2009, pp. 42-3, Lot 408)
(2) A shorter piece, with incomplete repeat of pattern, is in the Keir collection and was given by George and Nelly Wingfield Digby, having been found in Dorset. Monique and Donald King's description of this piece reads : 'The pattern, in silver, gold, green and shades of yellow on a faded, light blue background... The weave has a ribbed tabby ground formed by a pale blue warp and weft. The pattern is formed by brocaded wefts of silver thread (filé and frisé), and frisé threads of green and yellow silk sparsely wrapped with gold, bound in 1/3 twill by pale blue warp threads. The selvage has a violet stripe' (148 x 75 cm)'. George Wingfield Digby was the Keeper of Textiles at the V&A in 1951 and acquired our piece. The finding of this piece in Dorset raises the question of whether it may have come from Spain via Kingston Lacey where William John Bankes created his 'Spanish Room' in the early 19th century.
(3) A sample of a reweave of this silk exists in the Tassinari et Chatel Archives, Paris today. Illustrated in Planchon, pp. 40-41, 44.

France dominated the manufacture of fashionable silks before the French Revolution. After the suppression of the French royal household in 1797, the most able manufacturers survived by weaving silks for major clients outside France. This piece may have been made for Charles IV, King of Spain, by a former official supplier of the royal household, whose family business continued to weave luxury furnishings into the 21st century.

Documentation in archives of Tassinari et Chatel of a very similar design at that date. Livre de commissions, 'Broché no. 1523 Gros de tours au 1/2 au. fonds bleu broché argent sorbec et soye. dessin à vases. Pon 8386?' In the margin in a different (later?) hand, 'pour l'Espagne. Brocart Charles IV vraisembablement'. It shows the section of the pattern that has a medallion with a vase in the centre, a quiver of arrows below, birds and a vase of flowers above.