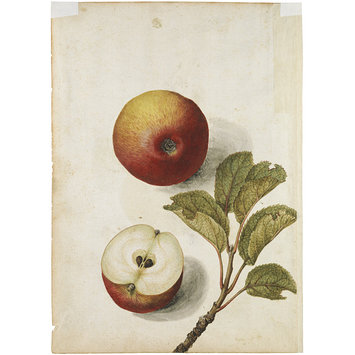 This is one of 59 watercolours of fruit and flowers that the French artist Jacques Le Moyne de Morgues painted on 33 sheets. We do not know exactly when he painted them, but there are some clues. The watermark in the paper is the same as that used in Paris and Arras in 1568, and the binding is French. It therefore seems likely that they date from the period between 1568 and 1572. This is when Le Moyne fled to England with other Huguenots (French Protestants) to escape religious persecution in France.

The watercolours were originally in a fine tooled-leather binding dating to the late 16th century. Curators identified the watercolours as the work of Le Moyne in 1922. They removed them from the binding and mounted them individually. (The binding is in the collection of the National Art Library at the V&A.)

In the 16th century botanical illustrators revived the practice of working from real plants rather than copying from earlier painted or printed images. Here the degree of naturalistic detail, including leaves which have been damaged by insects, suggests that Le Moyne was studying a living specimen rather than using an existing illustrations as his source.

Botanical illustration of a branch on the apple tree, an apple, and a halved apple.

Watercolour and bodycolour on paper

The drawings from this series were acquired in 1856 as one of the first purchases of the V&A, almost by accident, and solely because they were bound up in an extremely fine French late-16th-century brown calf binding.

Historical significance: This series of watercolours by Le Moyne are outstanding botanical illustrations, remarkable for their directness and truth to nature.

Watercolour, a quince on the recto and an apple on the verso, a sheet from a series of drawings of English flowers, fruits, etc., Jacques Le Moyne des Morgues, ca. 1575

Spencer Savage, ‘The discovery of some of Jacques Le Moyne’s botanical drawings’ in The Gardeners’ Chronicle, 3rd s., vol. LXXI (1922) 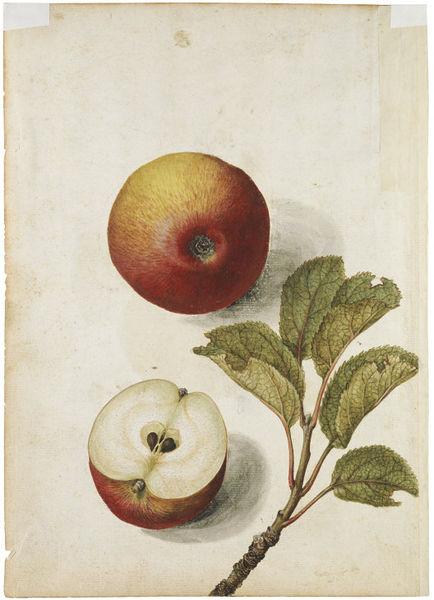