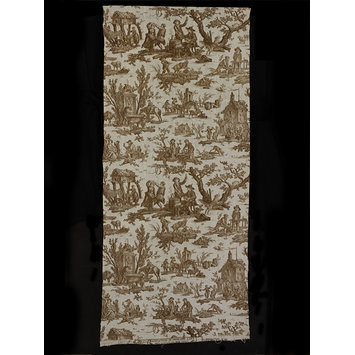 The Drinking Trough is typical of many scenes printed on cotton textiles in the late 18th century. It was printed at the factory established in 1760 by Christopher-Philippe Oberkampf (1738-1815) at Jouy-en-Josas, a village propitiously situated between Paris and Versailles, the main residences of the French court - and the most desired market for these expensive furnishings textiles. Oberkampf adopted the copper-plate printing process in 1770. By thirteen years later, his firm was so highly regarded that Louis XV named it a Royal Manufacture. Its reputation lasted well beyond its closure in 1843, monochrome printed textiles of this type often being called toiles de Jouy (literally 'cloth from Jouy') even now.

While Oberkampf employed in-house designers or pattern drawers who understood the technical complexities of the printing process, he also commissioned work from outsiders, especially for these grand scale copper plate prints. Jean-Baptiste Huet (1745-1811) was the artist who was particularly influential in providing images for this particular genre, in which rural industry and the countryside are represented in an idealised form, devoid of the harsh realities of working the land.

Furnishing fabric of copper plate-printed cotton. In brown (probably madder) on a white ground, with its chef de pièce revealing that it was manufactured by Oberkampf at Jouy. The compositions are taken from pastoral life, and the main vignette from which the piece takes its name is of a horse drinking from a highly elaborate neo-classical trough. The human figures are idealised peasants, all of whom interact with a variety of farm animals from goats and sheep to donkeys and cattle.

One scene has chickens, a couple dancing, a seated musician and a man drinking, and a dog barking at a cat up a tree. Another scene has sheep, a goat which has knocked over a small boy, and two youths playing bowls. Another scene has a classical fountain with a horse trough from which a horse is drinking, and a cattle with a ruined bridge over a stream in the background. Another scene shows a peasant family drinking and dancing to bagpipes in front of a cottage, and two boys, where one of them is pouring liquid from a pitcher into a bowl. There are two complete repeats in the length.

'MANUFACTURE DE OBERKAMPF, A JOUY, / PRES VERSAILLES, BON TEINT'
Oberkampf's manufactory at Jouy near Versailles good dye
Printed at the foot of the panel. The chef de pièce was printed at the end of each piece of fabric. Once the fabric was cut into lengths, this identifying label disappeared.

The V&A collection of French printed cottons dating to 1760-1830 comprises more than 500 textile fragments. Over 300 pattern books contain 300,000 designs of French printed cottons from the 18th to 20th centuries. These collections were largely shaped by acquisitions from three sources: Dr Robert Forrer, a Swiss-born archaeologist and antiques dealer (V&A acquisition in 1899), Madame Mayoux, a Parisian gallery owner and collector (V&A acquisitions in 1919) and Sara Lee Courtaulds (donation of Courtaulds' archive of pattern books, including eight from Oberkampf's factory at Jouy, in 2000). Other examples have been acquired by textile curators. 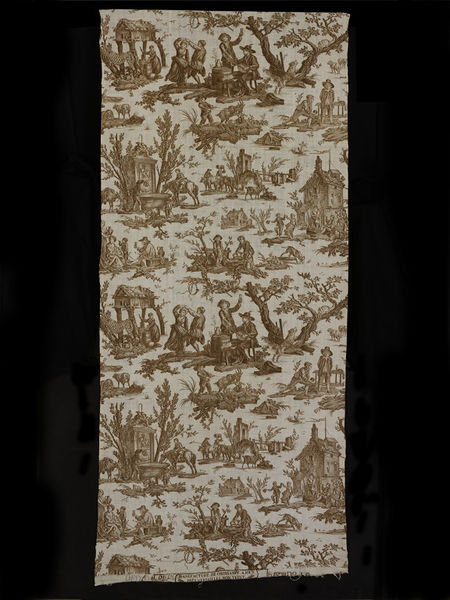