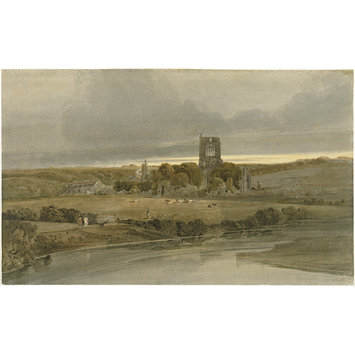 Thomas Girtin (1775-1802) achieved great things as an artist during his short life. This is one of the most famous and beautiful of British watercolours. The figures strolling towards the gate as another approaches them across the field add a human element to the landscape.

Girtin painted Kirkstall, its abbey and village, several times. It was one of his favourite subjects.

View of Kirkstall Abbey, viewed from the south, with river in the foreground. Two strollers with a dog on the left bank of the river and a female figure and several cows in front of the Abbey ruins. Brown, green and grey tones with bright streaks in the sky just above the horizon.

Although Girtin is known to have made water-colours in situ, while before the subject, his usual practice was initially only to make pencil drawings in a pocket sketchbook and later work up these compositions in the studio. 'Kirkstall Abbey' is clearly of this last kind. Not only do we have the evidence of its size to support this, but also the finished nature of its execution and sustained power of imaginative force.

In the summer months of 1800 Girtin was touring in Yorkshire, staying for a time as the guest of his patron Edward Lascelles at Harwood. 'Kirskstall Abbey' probably derives from sketches made during this tour, perhaps being worked up that winter on his return to London.

Girtin's subject matter is consistently topographical, and always depicts specific places. However, the present picture demonstrates the crucial change in his expressive aims that distinguishes his late work from the topographic tradition. Whereas formerly his approach had concentrated on the fabric of the building, here we find a new interest in atmospheric effects that are intended to heighten our melancholia in apprehending the scene. Approaching sunset shadows everything in autumnal browns inducing a pensive mood, and the tower, conceived as a ruin dramatically silhouetted against heavy cloud, by careful choice of angle, is reduced to one wall that frames an area of mellow evening sky. In achieving this dramatic configuration Girtin has not been over-concerned with topographical accuracy, rather his concentration has been upon an evocation of his own emotional responses. Thus, although we are viewing from the south, he depicts the low light of the setting sun as emanating from behind the tower; in reality it would be shinging from the direction indicated by the east-west axis of the nave. Moreover, the belfry window has been enlarged - he gives it an extra sixth light. Enclosing delicate tracery resembling that of an east window, the tower now seems to have a transient fragility not present in the actual sturdy structure.

By including contemporary incident - the strollers and their dog, a haystack and smoke from the part of the ruin that had by then been converted into a farmhouse - we are invited to contrast the present with the medieval past, in so doing perhaps reflecting upon morality:

'The great projector of these haughty piles.
With all his riches, honours and renoun,
Hides his poor head in dust - and is no more!'

(Lines addressed to a Company of Young Persons, whilst viewing the Ruins of Kirkstall Abbey, C Cayley, ca. 1798) 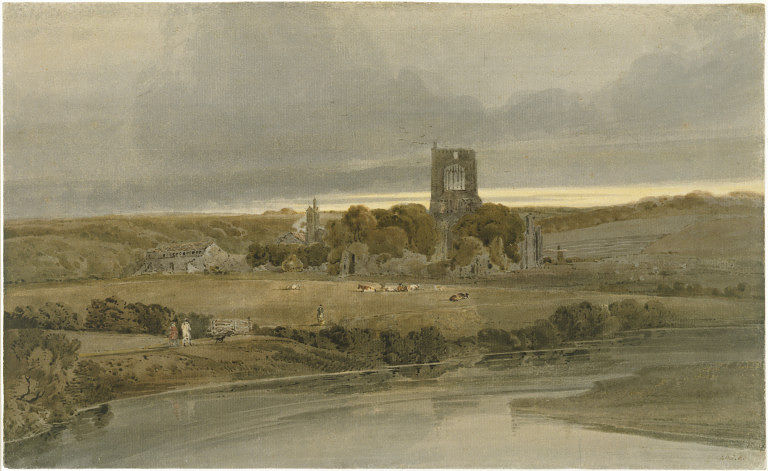