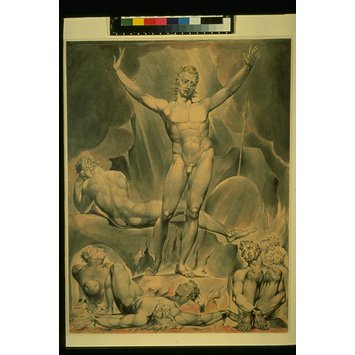 Thomas Butts (1757-1845) commissioned the artist William Blake (1757-1845) to produce a series of watercolours. They were to illustrate John Milton’s epic poem ‘Paradise Lost’, which was first published in 1667. Butts, a civil servant, was one of Blake’s most loyal patrons.

Inspired by Milton’s text, Blake represents Satan and his angel accomplices as beautiful in appearance. He based the nude figures on classical sculpture and on drawings and paintings by Michelangelo (1475-1564).

Satan stands, full frontal, with arms raised, weight on his left leg. He is surrounded by seven rebel angels, who crouch, lie and sit, writhing, on the rocks below. The angels have metal bands around their wrists. Painted in tones of grey and brown.

This drawing may be the one listed by Rossetti as No.85a in his List I, but the set of 12 designs for 'Paradise Lost' to which it belonged are there dated 1807.

Satan Arousing the Rebel Angels is one of twelve illustrations to John Milton's Paradise Lost. The set was commissioned by Thomas Butts, Blake's major patron of the 1800s. In depicting scenes from Milton, Blake was following a well-worn tradition; among his contemporaries, Fuseli, James Barry and Thomas Stothard had all done so.

This particular subject was considered the most popular from Milton's epic, and Blake produced several versions. The Butts Satan, with its dominant full frontal figure, raised above the writhing forms of the fallen angels, all contained within a small picture area, has a precedent in Thomas Lawrence's work of the same subject exhibited at the Royal Academy in 1799.

Whilst closely following the same compositional formula as his predecessors, Blake broke with tradition by evolving a highly personal and complex interpretation of Satan's rise and fall which was potentially in conflict with the spirit of Milton's poem. In the initial books of 'Paradise Lost' Satan is a figure of terror and power :'He called so loud, that all the hollow deep of Hell resounded'. This force is not suggested in Blake's water-colour. Blake's Satan has an Apollonian beauty as he tries to raise the seven enchained angels, hardly the legions 'thick as autumnal leaves' that Milton writes of.

Satan's pose is also reminiscent of 'Glad Day', the first engraving Blake did in 1780. This raised nude figure with outstretched arms recurs repeatedly in Blake's work. In this instance, such familiarity with the pose tends to diminish the expressive potential necessary in depicting a truly Miltonic Satan. 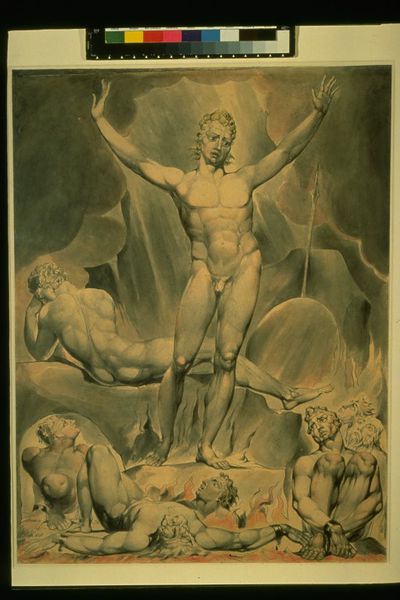