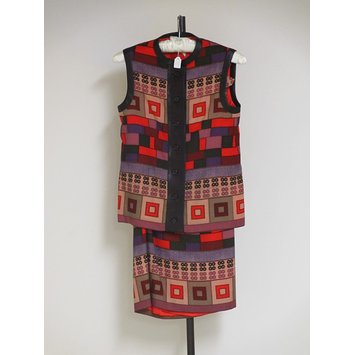 The relationship between artists and fashion designers is often very close. In the late 1960s and early 1970s the Scottish-Italian artist Eduardo Paolozzi created a series of prints called "Moonstrips Empire News". These captured the attention of Jules-François Crahay, head designer for Lanvin from 1964 to 1984. He commissioned special fabrics based on Paolozzi's designs which were exclusive only to Lanvin's Spring-Summer collection of 1971. This tailored two-piece, which Crahay called 'Malaga', was designed to be worn as day-wear. The sleeveless tunic and skirt are worn with a solid brown long-sleeved jumper, belt and scarf to focus attention on the vibrant pattern.

Paolozzi requested that Lanvin donate an example of this ensemble to the V&A in lieu of his royalties. Another Lanvin/Paolozzi ensemble, 'Djerba', was also donated (see T.304, A &B-1971). The 'Moonstrips Empire News' prints also inspired a series of Wedgwood ceramics, samples of which are held by the Ceramics Collection, (see CIRC.512-1972)

Day ensemble comprising a jacket, skirt, jumper, belt and scarf made from 100% wool (Trade name Bombyx), printed with a multi-coloured design in shades of brown, beige, red and purple, and trimmed with shiny brown vinyl.

The fabric was specially commissioned by Crahay after he had seen Paolozzi's print series "Moonstrips Empire news". It was exclusive to Lanvin, and was printed and made by the Italian company Bombyx and the French company Ducharne. Rather than accept royalties from the sales, Paolozzi requested that Lanvin donate the ensemble to the V&A in lieu of his royalties. Another Lanvin/Paolozzi ensemble, "Djerba", was also donated (see T.304, A &B-1971)

Some Wedgwood ceramics were also produced bearing a design inspired by the same print series. They were given to the Department of Circulation at the same time as these outfits, and are now held by the Ceramics Collection, see CIRC.512, A to E-1972 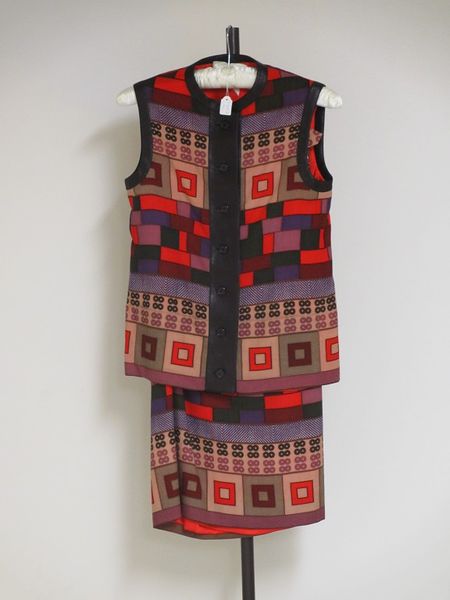