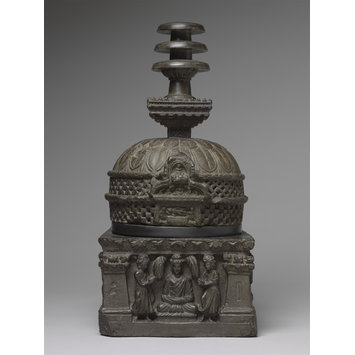 A reliquary is a container for holy relics. This one is designed as an independent small-scale monument. It is one of the most complete replica models of the classic Gandharan monumental stupa (dome-shaped shrine), none of which have survived in a complete state.

Containers for sacred relics were often concealed within stupas, and contemporary inscriptions confirm that devotees believed they contained authentic Buddha relics. Model stupas were also commissioned as reliquaries for the remains of eminent monks or Buddhist devotees. This example contained a small gold-leaf casket (Museum no. IS.299B-1951) which held bone fragments and stone beads.

It is constructed in three parts, comprising a square base, with a dome, surrounded by three umbrellas. Each of the four sides of the base depicts a seated Buddha being venerated. Each scene is flanked by pilasters with Hellenistic Corinthian capitals and an acanthus-leaf design border above.

The drum has two friezes. One has a stepped square design, the other a lattice-work pattern. The dome of the drum is decorated with an overlapping lotus-leaf pattern. A spectacular triple-umbrella, compete with a square section railing with crenelation detailing, completes the ensemble.

The Reliquary is in three parts: a square base; a dome surrounded by three umbrellas; and a gold-leaf relic casket, surmounted by miniature umbrella and containing bone fragments and two small beads. The stupa is carved in relief with seated Buddhas depicted on the sides of the base, and a lotus pattern on the dome.

Pakistan (The reliquary is reported to have come from Takht-i Bahi, formerly in the North West Frontier Province of India., made)

Formerly part of the Haughton Collection which was purchased from Major General H.L. Haughton

Containers for sacred relics were often concealed in Buddhist monuments, particularly stupas, and contemporary inscriptions reveal that they were believed to contain the Buddha's remains. Model stupas were also used as reliquaries, commissioned to contain some mortal remains of a Buddhist devotee or eminent monk. Within this reliquary was found a small gold-leaf casket (IS 2998-1951) which contained bone fragments and stone beads. 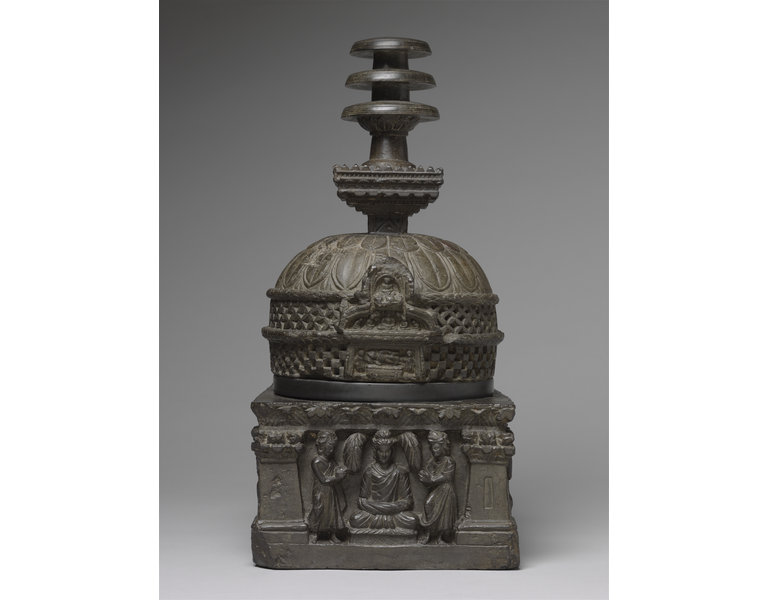