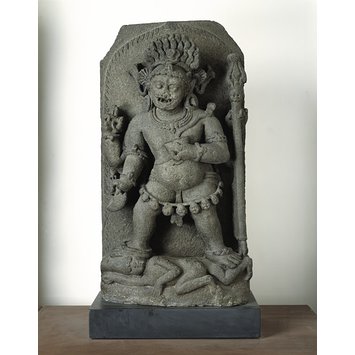 This sculpture depicts the protector Mahakala. He represents a violent and vengeful aspect of the Hindu god Shiva absorbed by Buddhism as a guardian of the faith (‘dharmapala’).

Here Mahakala stands astride the prostrate figure of a corpse. His face radiates his wrathful nature. His wide eyes glare, his gaping mouth reveals fangs, and a garland of severed heads hangs above his knees. His hair is represented as flames, rising horrifically above a snake ornament. Entwined snakes also form his armlets, bracelets, anklets and sacred cord. In his four hands he carries the flesh-cutter (‘karttrka’), skull-cup (‘kapala’), rosary and ‘trisula’ and skull-headed ritual staff (‘khatvanga’). These are the signifiers of his role.

Tantric Buddhism generated a proliferation of deities, benign and ferocious. Both were conceived as servants of the faith. But it was the wild and angry deities, typically demonic spirits subdued by Buddhism and henceforth willing servants of the faith, who retained their wrathful countenance in order to intimidate non-believers and those hostile to Buddhism.

The powerful protector Mahakala stands squarely against a flame-edged arched background on a defeated long-haired foe, who is also being attacked by a small animal. He carries a chopper and skull-cup; his second pair of hands holds a skull-topped trident formed like the Buddhist
vajra and noose. His hair rises horrifically above a snake, and his armlets, bracelets, anklets and sacred cord are all snakes. He is wearing heavy circular earrings and a circlet on his head with side cockades and uplifted streamers. He also has a necklace and a girdle below his waist over which spills his protruding paunch. His eyes stare fiercely with a third eye in between. He has a curling moustache over his open mouth which is fanged, and a garland of severed heads hangs down to his knees.

The protector Mahakala, a violent and vengeful aspect of Shiva absorbed by Buddhism as a guardian of the faith (dharmapala). Such borrowings from Hinduism into Buddhist imagery became common in the late phase of Buddhist development in Eastern India as the more esoteric stream of Buddhist practice gained ascendency. Images such as this Mahakala became, in turn, the source for many of the fierce deities of Himalayan Buddhism, the elaborate pantheon of Tibetan Buddhism, drawing heavily on the imagery of Eastern India

Mahakala
1100–1200
Orissa, East India
Basalt
Mahakala was an important guardian (dharmapala)
of Buddhism in India during its last phase. His violent
imagery, borrowed from the vengeful aspects of the
Hindu deity Shiva, includes hair as a mass of flames
and jewellery formed from entwined snakes. Destroyer
of the enemies of Buddhism, he carries in his four
hands a skull cup, flesh knife, rosary and staff with
trident end.
Museum no. IM.10-1930
1100–1200 [1/4/2009] 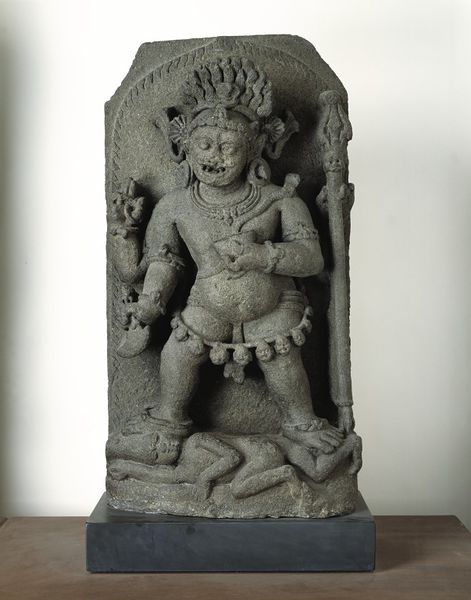