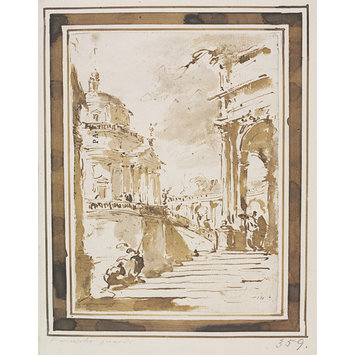 Architectural Capriccio, with a flight of stairs leading up to a Palladian building. Figures grouped about the steps; Pen and ink and wash.

Pen and ink and wash

Historical significance: Francesco Guardi was the most celebrated member of a family of eighteenth-century Venetian artists. After the death of his brother Giovanni in the middle of the century, Francesco established himself as a Veduta painter. Although he borrowed from many artists, the most important source of inspiration in his early period was certainly Canaletto. However, the painters probably had never worked together. Guardi followed closely Canaletto’s drawings and engravings in his topographically accurate views of Venice, which were in demand among foreign collectors.

Later in the 1770s and 1780s, Guardi’s style becomes looser and freer. He also painted the figures according to contemporary fashion, which makes his paintings a valuable indication of the current trends in hairstyle and dress. The ladies in his works from that period wear high coiffures decorated with feathers and flowers inspired by French and English fashions. Guardi was more comfortable with small figures in architectural setting than with large-scale religious scenes in altarpieces.

Venetian patrons preferred Guardi’s imaginary views, called capricci, to the straightforward recreations of the architecture of the city. The motifs include creative ensembles of classical architecture, picturesque ruins, Gothic arches, harbours and obelisks. Guardi often repeated these details introducing slight variations. Identifiable architectural details from Venice, such as the Doge’s Palace, conflate in the capricci with fruits of Guardi’s imagination.

Francesco Guardi died in 1793 as a major figure on the artistic scene. His characteristic style and considerable output encouraged many forgeries, especially in the medium of drawing.

This drawing is a capriccio or an imaginary ensemble of architecture and figures. A painting at the National Gallery (NG2517) and another at Lisbon are based on it (Morassi 1973, no. 753, 754). The building on the left may have been inspired by Palladio’ s designs for the Rialto bridge, which Guardi knew and copied in drawings (Morassi 1975,no. 372 and 373). Palladio’s project was never executed, as Antonio da Ponte’s design was chosen for the new Rialto bride. This drawing is exemplary of Guardi’s late, sketchy style. Most of the forms of figures and shadows are suggested using ink and wash, outlined only rapidly with pen. Guardi’s capricci often contain elements evoking the architecture of Florence and Venice, although creative synthesis seems more important here than topographical accuracy.

The work has been drawn on a printed sheet. The letters ‘PA’ are visible, placed horizontally below the dome of the building on the left. The sheet has a border around the edge in brown wash, similar to the one in Dyce 260 and other drawings by Guardi.

Guardi, Francesco; Architectural Capriccio, with a flight of stairs leading up to a Palladian building. Figures grouped about the steps; Pen and ink and wash; Italian; 18th century.

Drawn on the lower part of a printed sheet; the letters PA are printed across the building on the left and a line of print has been cut in half along the left margin. The drawing is mounted in the same way as no. 1030 below. A picture in the National Gallery and another at Lisbon are based on it (Morassi, L'opera completa, nos. 753 and 754). Levey suggests that the building on the left (without the dome) was inspired by Palladio's unexecuted design for the Rialto bridge, which Guardi knew and copied in two drawings in the Correr Museum (Morassi, Tutti i disegni, nos. 372 and 373). 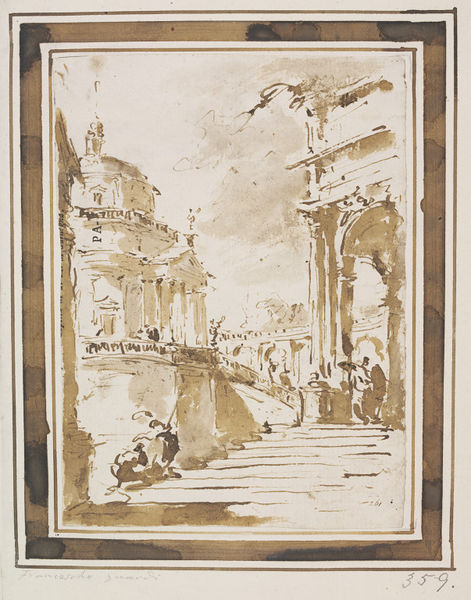