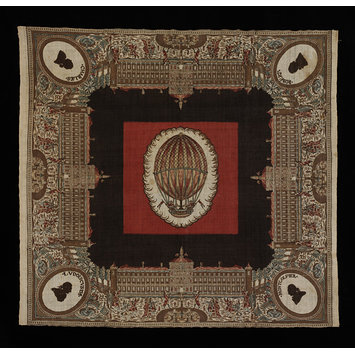 Many printed cottons of the 18th century commemorated contemporary events, such as the American War of Independence, significant events of the French Revolution, or the death of a famous literary figure, such as Jean-Jacques Rousseau. Commemorative designs satisfied nationalistic sentiments by celebrating significant contemporary events within specific countries. Entertaining, yet significant scientific events, such as the ascent of hot air balloons in the early 1780s also merited commemoration. Handkerchiefs in particular were among the most common commemorative items produced during this period.

The first successful manned balloon flight took place on 21 November 1783, when Pilâtre de Rozier and the Marquis d'Arlandes took off at Versailles in a hot air balloon constructed by the Montgolfier brothers. This event inspired a host of imitators and innovators to take to the air. Balloon flight was a scientific feat that caught popular imagination and as the public spectacles were widely disseminated through printed material, numerous objects were produced decorated with featuring ballooning iconography.

The design of this handkerchief depicts the Tuileries Palace (Paris) and is in commemoration of a later balloon launch by Jacques Charles and the Robert brothers - the first ascent of a manned hydrogen-filled hot air balloon on 1st December 1783. This flight happened just ten days after that of Rozier and d’Arlandes. Louis XVI granted them royal favour and gave permission for the ascent to be made from the Jardin des Tuileries (Paris). The balloon landed near Nesles (12 kilometres south of Boulogne) after a flight of over two hours.

Each of the four borders of the handkerchief is composed of a symmetrical pattern depicting the Tuileries. The centre of the design shows the hot air balloon, with a gondola basket suspended by ropes, in the shape of a stylised ship’s hull. The stern was recorded by contemporaries as showing fleurs-de-lis surmounted by a crown and these are suggested here. In the centre of the border design, six steaming barrels are shown connected to a large central pipe. These were used as chemical generators to create the hydrogen to fill the balloon. Each barrel was filled with iron filings and acid, the resultant hydrogen flowed through the pipes to a central enclosure filled with water before rising into the balloon.

Handkerchief commemorating the ascent of a hot air balloon at the Tuileries, Paris.

The handkerchief is a cotton square, plain-weave, which has been block-printed in red, yellow and black. Blue colouring has been used throughout the design, applied using a method known as pencilling; the direct application of indigo dye on to the surface using a pencil or brush. The two vertical edges of the handkerchief are raw selvages, whilst the two horizontal edges have been tightly hemmed.

In the centre of the design is a red square that contains an image of a balloon within a stylised medallion suggestive of a cloud. Suspended from the balloon is a decorative basket containing two men, each holding a flag. The depiction of the balloon has a vertical line of symmetry through the centre. Each side of the border of the handkerchief is composed of a symmetrical pattern which shows a classical building in the background, a foreground of figures promenading and looking up to the sky, a fountain and a line of trees.

The promenading figures are depicted in two scales; the larger scaling allows the figures' fashionable clothing to be seen whilst the smaller scale figures demonstrate the grand size of the Tuileries Palace and provide a greater sense of height to the balloon's flight. The majority of the figures are shown gesturing to, or looking up at, the balloon above them

Each corner contains a medallion decorated with foliage and blue ribbon. Each of the medallions features a silhouette portrait of a different man whose name is lettered around the top of the cameo: Ludovicus XVI, Montgolfier, Charles and Robert.

The scene is of the Tuileries Palace in Paris, and the balloon ascent commemorated is that of Charles and Robert in December 1783 - the first ascent of a hydrogen-filled hot air balloon.

Alsace (Mulhouse in Alsace was one of the largest centres of production of printed cotton., designed and made)

Ludovicus XVI
Louis XVI
Louis XVI of France was particularly excited by this new invention and invited the Montgolfier brothers to fly a hot air balloon at Versailles on 19 September 1783.

Montgolfier
Probably Jacques-Étienne Montgolfier (1745 – 1799), one of the two brothers who invented the montgolfière style hot air balloon, globe aérostatique or airship. He was the one who went to Paris in 1783 to demonstrate their invention. He worked with Jean-Baptiste Réveillon, the wallpaper manufacturer, to create a balloon that was sky blue and with golden flourishes, signs of the zodiac and suns. It was tested on 11 September and subsequently demonstrated at Versailles on 19 September before the King and Queen. In December 1783 in recognition of the achievement of Jacques-Etienne and Joseph-Michel (1740 – 1810), their father Pierre was elevated to the nobility and the hereditary appellation of de Montgolfier by Louis XVI of France.

Charles
A physician, Jacques-Alexandre-César Charles introduced inflating hot air balloons with hydrogen. On 1 December 1783, he made the first ascent in this type of balloon with Robert junior.

Robert
Nicolas-Louis Robert (Robert le jeune) helped Charles to build the first balloons inflated with hydrogen and was a passenger in this first ascent on 1 December 1783.

B
Embroidered in the corner, by the silhouette of Robert.

Historical significance: Significant as a commemorative textile of a French achievement of the 1780s.

Ballooning:
The Montgolfier brothers made the first public demonstration of their balloon in Annonay on 4 June 1783 in the presence of city dignitaries. The flight covered 2 km and lasted 10 minutes at an estimated altitude of 2,000 metres. Jacques-Etienne Montgolfier then went to Paris to make further demonstrations. The first tethered balloon flight with humans on board took place on October 19, 1783 with the scientist Jean-François Pilâtre de Rozier, the manufacture manager, Jean-Baptiste Réveillon and Giroud de Villette, at the Folie Titon in Paris.

The first successful untethered, free flight with human passengers took place on 21 November 1783, when Pilâtre de Rozier and the Marquis d'Arlandes took off at Versailles in a hot air balloon constructed by the Montgolfier brothers. Louis XVI had originally decreed that condemned criminals would be the first pilots, but de Rozier and d'Arlandes, successfully petitioned for the honor. This event inspired a host of imitators and innovators to take to the air.

The Event Commemorated:
Jacques Charles and the Robert brothers launched the first manned hydrogen-filled hot air balloon on 1st December 1783. Louis XVI granted them royal favour and gave permission for the ascent to be made from the Jardin des Tuileries (Paris). Jacques-Alexandre-César Charles and Nicolas-Louis Robert (Robert le jeune) travelled in the basket. After a flight of over two hours, the balloon landed near Nesles (12 kilometres south of Boulogne).

The balloon envelope was fitted with a hydrogen release valve, and was covered with a net from which the basket was suspended. Sand ballast was used to control altitude.

The crowd of spectators reportedly numbered ca. 400,000, a number of whom had paid for tickets to enter a special enclosure from which to view the launch. Amongst the spectators were the balloonist Joseph Montgolfier and Benjamin Franklin, the diplomatic representative of the United States of America.

Jacques Charles has been recorded as later describing his emotions during the flight as follows:

'Nothing will ever quite equal that moment of total hilarity that filled my whole body at the moment of take-off. I felt we were flying away from the Earth and all its troubles forever. It was not mere delight. It was a sort of physical ecstasy. My companion Monsieur Robert murmured to me – I’m finished with the Earth. From now on it’s the sky for me! Such utter calm. Such immensity!'

After this day, Charles never flew again but balloons using hydrogen for their lift came to be called a Charlière in his honour.

The Tuileries are here represented on the four borders of the handkerchief, and a cameo of the four characters linked to this enterprise at each corner, Louis XVI, Montgolfier, Robert le jeune and Charles, the physician who came up with the idea of using hydrogen to inflate such balloons. Subseqeuently, other flights took place around France, and images of such balloons appeared in a number of different media.

‘Commemoration
Toiles printed with commemorative designs satisfied nationalistic sentiments by celebrating significant contemporary events in France. Their patterns could record important affairs of state, such as a royal visit and a French naval victory (pls 57 and 58), but also events of cultural interest. One of the first ascents of the Montgolfier brothers’ hot-air balloon is recorded on a cotton handkerchief block-printed in Mulhouse (fig.38).

The central medallion shows the balloon in flight, while the borders illustrate the Tuileries palace, with Parisian spectators in the grounds. The four corner medallions show silhouettes of the concerned parties, including Louis XVI, the reigning monarch.

While popular, such commemorative textiles – some akin to souvenirs – could not, by their very nature, be expected to enjoy the same longevity as other, more versatile plate-printed patterns, most of which had a life of approximately 10 years. Indeed, if a commemorative textile was not produced in a timely fashion, the event it celebrated could fade from memory before the fabric had even left the manufactory.1 Plate-printed designs were costly to produce and manufacturers faced with a surplus of cloth in an unfashionable design soon found it unsaleable.’

This handkerchief was produced to commemorate the first ascent of a hydrogen-filled hot air balloon at the Tuileries in December 1783. 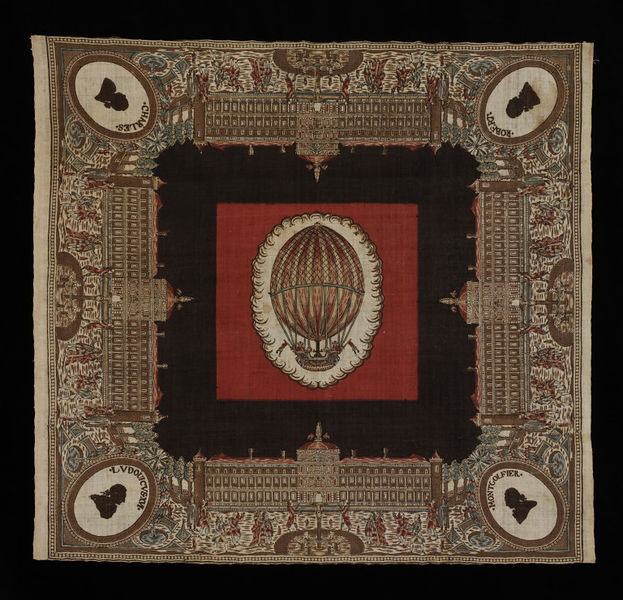