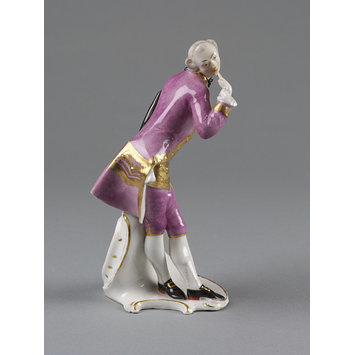 Franz Anton Bustelli's models for the Nymphenburg porcelain factory are often regarded as some of the most delightful porcelain figures ever made. Although only working at the factory for eight and a half years, Bustelli designed many different models, among them a group of sixteen Italian comedy figures, of which Octavio is one. The group derives from well-known popular print sources, but just as Kaendler's style is recognisable in the figures he made at Meissen using the same prints, those made at Nymphenburg are unmistakably by the hand of Bustelli. They are all slightly elongated, graceful, elegantly dressed and modelled with an almost lifelike sense of movement.. They are also extremely well-observed and relate to companion figures by virtue of their stance, expression and gestures.

In the Italian 'Commedia dell'arte' Octavio is the handsome lover of Isabella, however the subtle modelling also suggests he is a comically lovesick and foppish kind of young man. His dress and hairstyle (or wig) are slightly out-of-date which was the norm for theatrical costume of the day, but may also be intended to suggest he is an impoverished nobleman. His attention has been caught by the sight of his paramour Isabella and we see him turning to feast his eyes on her and blow her a kiss.

Figure of a man in hard-paste porcelain, Octavio, modelled dressed in a long pink jacket, matching pink breeches and black shoes, all with gilded details, his jacket open to reveal his waistcoat decorated with a brownish purple lustre, imitating Böttger lustre, within lacy gilded borders, standing in a casual pose with his legs crossed, turning to look admiringly over his right shoulder and blow a kiss towards his beloved, set on a white, flat, scroll-edged base.

impressed shield of Bavaria mark edged with a gilded line
placed high on the scrolling support, the gilded outline is unusual

impressed 'o' or '0'
According to Alfred Ziffer, denotes the type of paste used for this figure

inscribed scrolling capital 'S'
on unglazed base, appears to be contemporary, of unknown significance

Figure of Octavio, a lovesick comic character from the Italian theatre, by Franz Anton Bustelli, made in hard-paste porcelain at the Nymphenburg porcelain factory in Nymphenburg, Bavaria, ca. 1765. 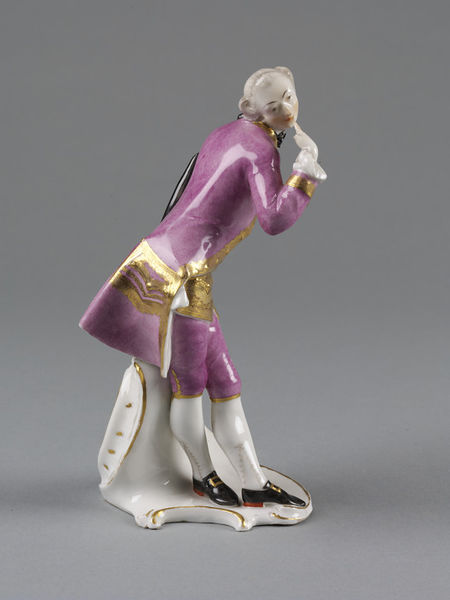