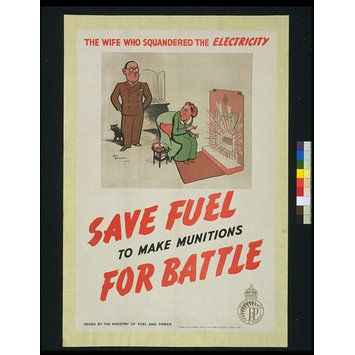 The Wife Who Squandered The Electricity

In Britain, reducing domestic fuel consumption was an essential part of the war effort between 1939 and 1945. This poster was one of a series depicting the shame and guilt of family characters (both male and female) caught squandering the nation's precious resources at home. The designer, Henry Bateman, who originally made his name through the popular journals The Tatler, The Sketch and The Bystander, specialised in the depiction of angry outrage caused by anti-social or unthinking behaviour.

Issued by The Ministry of Fuel and Power

Official poster campaigns targeted at the civilian population were a common feature of life in Britain during the Second World War. Many of the messages had a resonance that was to influence the habits of British home owners well into the second half of the century.

In this example, The Ministry of Fuel and Power amplifies its call for careful use of power supplies with a witty but poignant illustration of domestic 'bad form'. It was impractical to ration domestic gas and electricity, so it became vital to encourage the habit of voluntary restraint and self-regulation. The shame people on 'The Home Front' ought to feel when precious electricity was wasted is captured in Bateman's scene of a conscientious husband seeing his spouse using an electric fire to dry her nail varnish. The fire has been fitted into a tiled bedroom chimney-piece in an up-to-date Moderne style.

'The Wife Who Squandered The Electricity. Save Fuel to Make Munitions for Battle'; Poster issued by the Ministry of Fuel and Power during the Second World War; Colour offset lithograph; Signed; Design by Henry Mayo Bateman; Great Britain; 1943.

Attribution note: The poster was issued by the Ministry of Food and Power during World War II
Reason For Production: Commission 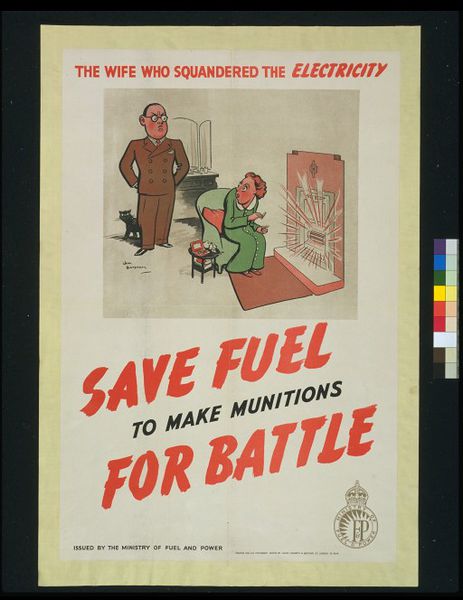