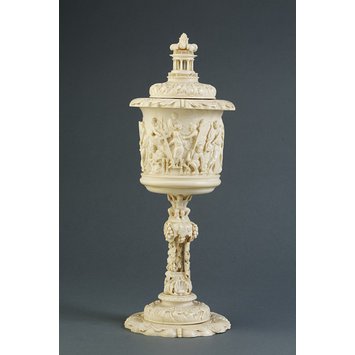 This is a finely carved ivory cup and cover of the baroque period, when ivory working was at its height in Germany. The iconography of the scenes is unusual and enigmatic, and the purpose of this piece is uncertain. It clearly has a religious significance, and may well have been a commission made for an owner with his own specific programme.

The cup and cover is made by Balthasar Griessmann in ca. 1650-1700. For many years Griessmann (ca. 1620-1706) was known only as the Monogrammist B.G. In recent years his identity has been established by Franz Wagner, who established from documentary sources that Griessmann worked in Vienna and Salzburg, concentrating on ivory vessels and dishes, although he also worked in stone and horn. Many of his ivory relief depend from South Netherlandish engraved sources, and have a distinctive figural style, crowed with small figures, often with windswept hair, and charming genre details. He may have trained in the Netherlands.

The relief scene on the lid shows a male figure (almost certainly Orpheus) holding a lyre and a putto playing the bagpipes, along with several animals making music. Allegorical scenes adorn the drum: a youth holding a cross, who may represent Christ, or the Christian soul, stands on a foliate monogram IHS, surrounded by the Seven Planets: Mars, Mercury, Saturn, Jupiter, Venus and Cupid, Diana and Neptune; Apollo crowns the figure with the cross. Saturn with his scythe appears to be cooking at a brazier, and it was suggested verbally by Fritz Saxl that this could be a reference to Saturn as the god of alchemy (Museum records). On the other side of the drum is a scene of the Triumph of Faith, who is seated on a chariot behind a procession of figures making their way towards a sunburst. The figure of Death behind a figure and a cross are seen in the right distance. The stem of the cup is composed of vines laden with grapes and three putti as supports. The foot has three scenes of Hell with horned devils and tortured figures. The top of the lid is adorned with a colonnaded temple-like structure. Foliate motifs of fruit and flowers run round the lid, both externally and internally; further foliate motifs run round the base. The body of the cup and lid were both turned before the figurative carving was executed.

On acquisition this ivory was called Netherlandish, second half of the seventeenth century. Theuerkauff attributed it stylistically to the Master BG (now known to be Baltasar Griessmann), though it is unsigned and undated. The faces, decorative details, and drapery (as Theuerkauff remarks) are reminiscent of other signed works by Griessmann, such as a tankard in the V&A ( A.212-1969). The scenes are highly likely to depend from engraved sources, although these have not been traced. The piece is undated, and it is difficult to give it a specific date, although it is in the present writer's view an autograph work, rather than a workshop piece made after Griessmann's death.

Given by Mrs Eason Wilkinson in memory of her husband in 1936; on loan to the Museum from Mrs Wilkinson from January 1928.

Given by Mrs Eason Wilkinson in memory of her husband in 1936; on loan to the Museum from Mrs Wilkinson from January 1928.

Theurkauff, Christian. 'An Ivory Carving of Judith and Holofernes and the Work of the Baster B.G' Register of the Museum of Art University of Kansas, Lawrence, Kansas, III, Nos 5-6, Spring 1966, p.21, no. 32.
Trusted, Marjorie, Baroque & Later Ivories, Victoria & Albert Museum, London, 2013, cat. no. 12 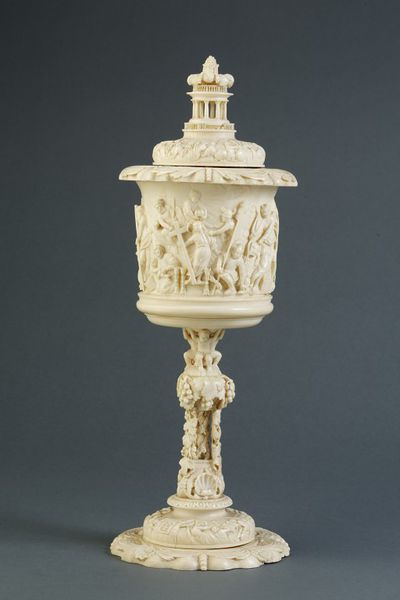