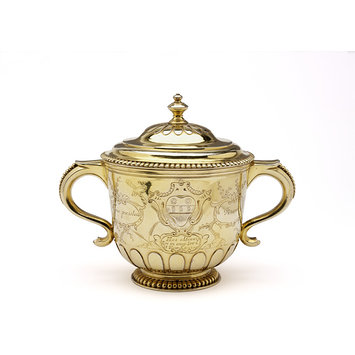 This silver-gilt cup and cover were made from recycled silver that originally decorated the canopies used during King James II's coronation in 1685. After the ceremony, the silver was divided between the barons that carried the canopies. Two barons from the same family, Cresheld Draper, MP for Winchelsea and Gawden Draper, combined their share to make this commemorative cup. The four figures carrying the canopy in the fashionable chinoiserie style, flat-chased on one side, record the original purpose of the silver; the coat of arms and Latin inscriptions explain its commemorative significance.

The cup is flat-chased on one side with four 'Chinoiserie' figures carrying a canopy. On the reverse are engraved the arms of the Draper family of Winchelsea, Sussex, 'Or a fesse gules between three anulets gules with three cups or with covers upon the fesse', with the legend 'Tria pocula Fero' which translates as 'I bear three cups'. The cup stands on a cast circular gadrooned foot, and the lower part of the body and cover are decorated with cut card work. The Latin inscription 'Hoc obtinui Ex in aug: Iac: 2.d Et Mar: Ap:23.85.' translates as 'I obtained this from the Coronation of James II and Mary, April 23 1685.'

Tria pocula Fero
I bear three cups
This may be a temporary heraldic motto acquired by Cresheld Draper as Baron of the Cinque Ports, an office that he held for the day of James II's Coronation only

The silver from which the cup and cover were made was delivered to Sir Benjamin Bathurst from the Jewel House three days before the Coronation as 'Twelve Large Canopy staves, crowned with silver 6 for his Majties & 6 for her Majties Canopy' weighing 369 ounces and 10 penny weights and '8 gilt Bells 4 each Canopy' with a combined weight of 61 ounces and 15 penny weights. The coronation canopies were carried by the Barons of the Cinque Ports as a symbol of the role that they played in defending king and country. The ports of Dover, Hastings, Hythe, Romney, Rye, Sandwich and Winchelsea, were granted privleges by the king in exchange for supplying ships and men to protect England's vulnerable Southern coastline, although the towns of Deal, Faversham, Folkestone, Lydd, Margate, Ramsgate, and Tenterden also sent representatives. After the ceremony, the Barons were entitled to keep the canopies, bells and staves. This cup and cover are made from the share of silver acquired by Cresheld Draper and his son Gawden Draper as perquisites of their role in the Coronation of James II and Mary of Modena. Cresheld Draper carried the canopy over the king; and Gawden Draper, probably his son, carried the canopy over the queen.

The scene of four chinoiserie figures carrying the canopy flat-chased on one side of the cup records the original purpose of the silver. The coat of arms and Latin motto and inscription indicate the status of the original owners Cresheld and Gawden Draper and explain the cup's commemorative significance. Francis Sandford's illustrated account of the Coronation of James II and Mary of Modena, published in 1687, shows scenes from the Coronation procession with the canopies held over the king and queen. Each figure in the procession was drawn from life and so the contemporary appearance of the two members of the Draper family is captured for posterity.

Francis Sandford's 1687 account of James II's Coronation illustrates the procession with canopies supported over the king and queen by the Barons of the Cinque Ports. Silver-gilt bells from the canopies held over George II (1714-15), George III (1761-2) and George IV (1820) are displayed in the V&A's Whiteley Silver Galleries (Room 65 Case 20) and provide an appropriate context for the James II Coronation cup.

The cup is made from recyled silver that originally decorated the canopies used during King James II's coronation in 1685. After the ceremony, the silver was divided between the barons that carried the canopies. Two barons combined their share to make this commemorative cup.

Only eight other pieces of 'coronation silver' are known to have survived. The cup will eventually be displayed in the Silver Galleries

London
Silver-gilt
Purchased with the assistance of the Art Fund, the National Heritage Memorial Fund, the Hugh Phillips Bequest to the V&A, the Friends of the V&A, the Worshipful Company of Goldsmiths and an anonymous donor. 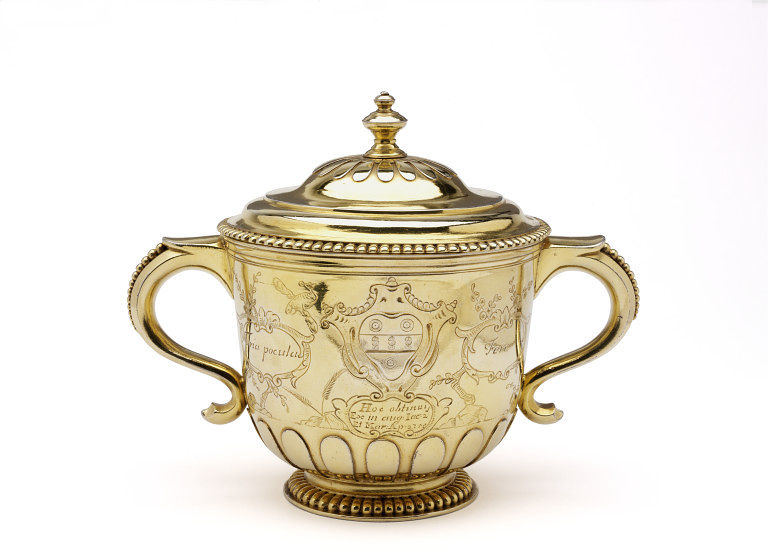