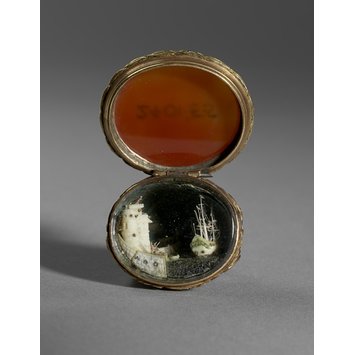 This seal is a highly-worked luxury object of the mid-eighteenth century. The ivory micro-carving of ships in a port resembles French pieces of the eighteenth century, such as a box and a finger-ring respectively, both in the Hull Grundy collection at the British Museum. The style of the enamels and the chased gold work implies a date of the mid-eighteenth century; the martial overtones could even reflect the start of the Seven Years War in 1756. Both the style and the iconography of the enamels imply the object is French.

This elaborately worked object was once a seal, though it lacks any engraved insignia, and is set with simply an uncarved carnelian, which may be a replacement for an intaglio removed at an earlier date.
The ivory element is a micro-carving of two ships at a fortified port, this little scene being set within the hinged chased and coloured gold case. The gold is worked with rococo motifs with four inset enamels depicting: a male figure seated on clouds in classical armour with a trophy of arms (perhaps Mars); a seated female figure, also in military guise and also seated on clouds, whose shield shows three fleurs-de-lys (representing perhaps France); and two smaller enamels, each depicting trophies of arms. The whole object is encased in a cylindrical shagreen case.

Gold, enamels, ivory and cornelian under a glass cover, in a shagreen case.

Bohn, H. G., A guide to the knowledge of pottery, porcelain, and other objects of vertu: comprising an illustrated catalogue of the Bernal collection of works of art, with the prices at which they were sold by auction, and the names of the present possessors: to which are added an introductory essay on pottery and porcelain, and an engraved list of marks and monograms, London: 1872, p. 346 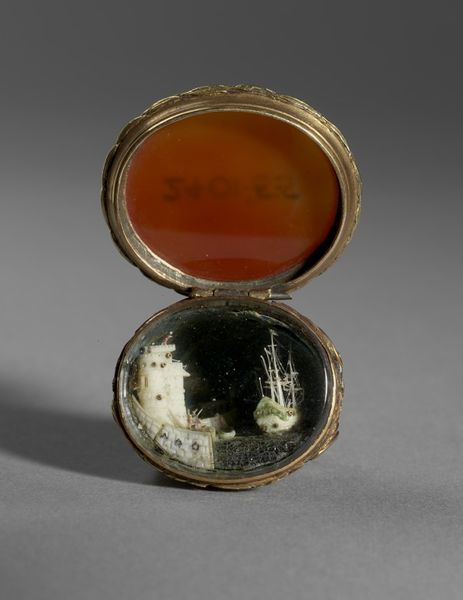