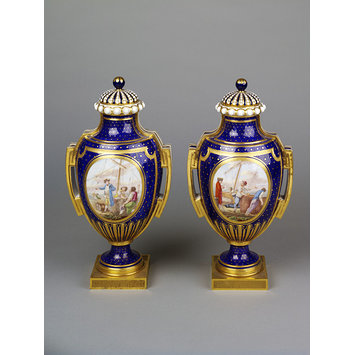 In the eighteenth century, vases were often displayed on furniture or chimney-pieces, usually in front of a mirror. Rosalind Savill, in her catalogue of the Wallace Collection Sèvres porcelain states in her introduction to the 'Vases' section (vol. 1) that Louis XVI's inventory of porcelain at Versailles shows Sèvres in most rooms, including sets of vases, or garnitures as they were known. This model was launched in 1766 and was known as vase 'à panneaux' or vase 'à perles', no doubt because of the porcelain 'pearls' around the rim of the vases' necks and all over the covers. The shape appears to have been popular and was produced until the 1790s. The panels are painted with quaysides scenes depicting officers and sailors handling cargoes and these were used on a number of surviving imposing vases such as these but are also sometimes found on teacups and smaller vases used for bulbs or flowers. Known examples date from about 1760-1790 and the painter who made this subject his speciality was Jean-Louis Morin (1732-87). Rosalind Savill suggests that these 'marines' as they were known, were possibly based on the work of Dutch seventeenth-century marine painters such as Ludolf Backhuisen or Johann Lingelbach, Teniers, or contemporary French painters such as Joseph Vernet or Lacroix de Marseille, with the details being adapted for porcelain panels by the head of the painters' workshop, Jean-Baptiste-Etienne Genest. A pair of vases of the same shape with more elaborate versions of the same scenes is in the Royal Collection. In his catalogue of this collection, Geoffrey de Bellaigue cites a further six known examples of them, some signed by Morin and others attributed to him. The plain ground colours of the 1750s become are often enriched with gilded patterns from the mid 1760s onwards. This is sometimes described as pois d'or, mouches d'or or sablé d'or in the factory records.

Vase and cover decorated with a harbour scene

Geoffrey de Bellaigue. French Porcelain in the Collection of Her Majesty the Queen, Royal Collection Publications, 2009, 3 vols. See pp. 256-274 for examples of this shape, including catalogue no. 52, a pair of the first size dated 1767, painted with the same quayside subjects, although given a more elaborate treatment. The author comments pp. 259-260: 'The quayside scenes can probably be atrributed to Jean-Louis Morin (active 1754-87). The scene on 52.1 [the officer in blue pointing to the left] is repeated on cat. no. 93 (c. 1779-81), as well as on six other pieces known to the compiler, ranging in date from 1769-1790 which either bear Morin's mark or are attributed to him. In the case of the piece dated 1790, namely a vase cassotlette Bachelier in the Wallace Collection, wich post-dates Morin's death by three years, Savill has plausibly argued that, like some documented cups and saucers, it could have been among those pieces which were left unfinished when he died and were retouched three years later by Noualhier...A comparison between the scenes, which vary to some extent in the number of figures, reveals, however, a broad consistency in the colours of the clothes worn by the individual sailors, as well as parallels, in some cases, in the markings on the bales and barrels. As already noted by Savill, the markings '#/G [italic]/No 4' - are repeated on cat. no. 93 and on one of the pair of vases etrusques dated 1769. While this is a further argument for believing that they awere all painted by Morin, it could also imply that Morin was copying a drawing which served as model both for him and, when need be, for others, such as Noualhier fils. As regards the other scene on.2 [the officer in red speaking to sailors loading barrels on the right of the scene], it proved almost as popular, and has been traced so far on some six vases, two of which are dated 1768 and 1769.'
Savill, Rosalind. The Wallace Collection: Catalogue of Sèvres Porcelain, 3 vols. London: Trustees of the Wallace Collection, 1988. See Vol. 1, pp. 316-327, C297-302 for a discussion of this shape and its introduction and one pairs one group of three and one sinlge vase à perles painted by Morin. C297-8 (dated 1766) have military camp scenes, C299 (c. 1775) and the group of three vases C300-302 (c. 1779) have similar but not identical scenes to 785&A-1882

The covers to both vases are later replacements 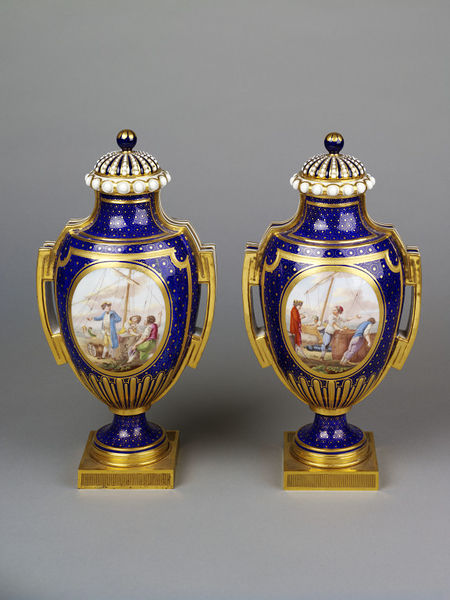