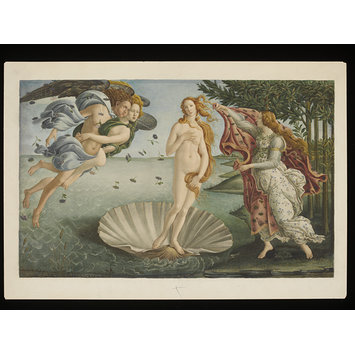 This watercolour is a copy made by Cesare Mariannecci (Rome 1819 – Florence 1894) after the Birth of Venus (c. 1484) by Sandro Botticelli (1444/5-1510). It was realised for the Arundel Society, founded in 1848 with the intention of promoting the knowledge of art through the publication of reproductions of works of art. The Arundel Society popularised Renaissance art, especially Italian, echoing an increasing interest for ‘primitives’ in those years.

The painting is one of the most famous by Botticelli, along with the Primavera, both at the Uffizi, Florence. It could be read as the representation of Neo – Platonic love, pure and non – carnal, of which Venus is the symbol. In spite of the popularity of Primitives such as Fra Angelico (1395/1400-1455) or Ghirlandaio (1448/9-1494), Botticelli did not become a well-known painter until the 1870s.

Watercolour of a naked and blonde female figure (Venus) standing in a shell in the sea. The Wind blows from the left while a young woman tries to cover the body of the Goddess.

Acquired in 1995 from the National Gallery of London.
Watercolour copy made for the Arundel Society and published as a chromolithograph in 1870 by Storch and Kramer.

This watercolour is a copy after the Birth of Venus, a large painting made by Sandro Botticelli (1444/5-1510) who lived and worked principally in Florence, primarily for the Medici Court. The painting, now at the Uffizi in Florence, is dated around 1486. The theme comes from the Metamorphoses, a narrative poem in Latin by Roman poet Ovid, which is one of the most important sources for Renaissance iconography. There are many additional references to a work by Florentine poet Angelo Ambrogini, commonly known as Poliziano (1454-1494) entitled ‘Le stanze per la giostra’ (1484). Poliziano was a contemporary of Botticelli and also worked for the Medici court. His poem, like Botticelli’s Birth of Venus, is based on Neo-Platonist theory, the dominant intellectual system of late 15th Florence.

Venus is depicted naked in a shell emerging from the sea. The Wind blows gently from the left while a young woman tries to cover the body of the Goddess. Violets, seen in the meadow are a symbol of love, of which Venus is the Goddess. The painting is famous not only for its composition and meaning but also as the first painting on canvas to be made in Florence.

In spite of the popularity of Primitives such as Fra Angelico (1395/1400-1455) or Ghirlandaio (1448/9-1494), Botticelli did not become a well-known painter until the 1870s. With the publication of the John Ruskin’s pioneering book Modern Painters (first volume published in 1843, the second in 1846), the importance of early Renaissance painters was reshaped. Charles Eastlake (1793–1865; painter and art administrator) began to amass an important collection of works by Florentine artists of 15th century, buying many of them for the National Gallery, of which was the first Director. However, Botticelli’s work was not represented in the collection until the end of the 1860s.

Although the fame of Botticelli came relatively late, his paintings bought for the National Gallery exercised an enormous influence on the Pre–Raphaelites painters and by the end of the 1890s, he was considered one of the great masters of the early Renaissance. This Arundel Society watercolour after the Birth of Venus published in 1868 and associated chromolithographs, were fundamental to public awareness of the painting and lead to an increasing interest in Botticelli.

This watercolour copy was painted by Cesare Mariannecci (1819-1894), an artist trained in the Accademia di San Luca in Rome. He moved to Florence in 1859, where he was principally active. Mariannecci was one of the most productive copyist engaged by the Arundel Society and worked for many years making more than 85 watercolours for the Society. His first copies were not very detailed and did not accurately record deterioration and original colours. After criticism from the influential magazine Athenaeum, in 1864 Mariannecci was instructed by the Society to reproduce the originals as faithfully as possible, avoiding his personal interpretation. 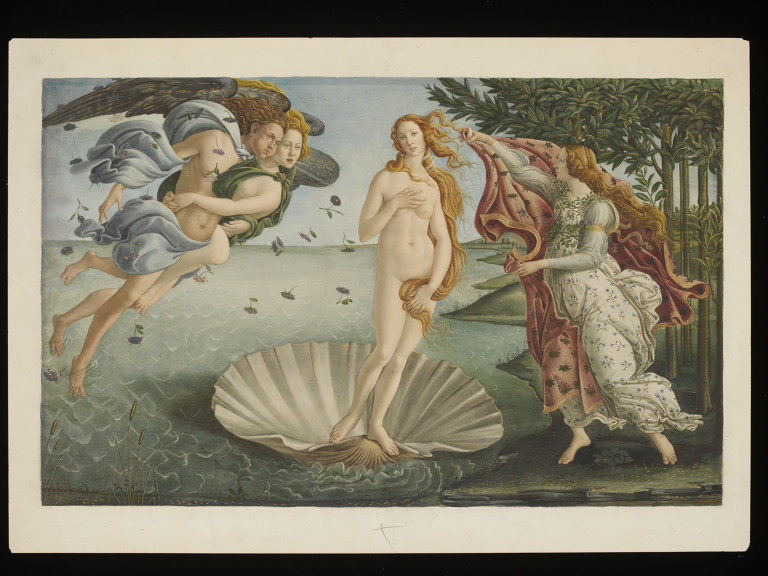