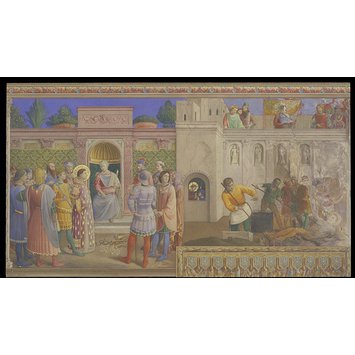 Copy after St Lawrence befor the Emperor and Martyrdom of St Lawrence, Fra Angelico in the Niccoline Chapel (Vatican, Rome)

This watercolour is a copy after the frescoes in the Niccoline Chapel in the Vatican (Rome) by Fra Angelico (1395/1400 – 1455), painted by Eduard Kaiser (Graz 1820 – Vienna 1895) in 1878. It was painted for the Arundel Society, founded in 1848 to promote knowledge of the art through the publication of reproductions of works of art. The Arundel Society popularised Renaissance art, particularly that of the Italian Old Masters, echoing a growing interest for ‘primitives’(art of Western Europ prior to the Renaissance) in the second half of the nineteenth century.

Fra Angelico left Florence in 1445 for Rome, where he painted the walls of the private chapel of Pope Nicholas V from 1447 to 1451. The frescoes represent the lives of two early Christian martyrs: in the upper part the story of St Stephen, in the lower part scenes from St Lawrence’s life. The technique is more expressive than in the Convento di San Marco, the previous Fra Angelico’s cycle in a religious institution, painted in the 1440s.

Exhibitions: In Pursuit of Old Masters, London, Victoria & Albert Museum, 7th October 1996 - 30th March 1997.
Acquired in 1995 from the National Gallery of London.
Watercolour copy made for the Arundel Society by Edward Kaiser in 1878. Not published.

Original work
This watercolour belongs to a series of copies after the frescoes in the Niccoline Chapel in the Vatican (Rome) realised by Fra Angelico (1395/1400 – 1455). Fra Angelico left Florence in 1445 for Rome, where he painted the walls of the private chapel of Pope Nicholas V from 1447 to 1451.

The frescoes represent the lives of two early Christian martyrs: in the upper part the story of St Stephen, in the lower part scenes from St Lawrence’s life. The devotion of the Martyrs reflects the Pope’s desire to affirm the superiority of the Pontiff, in a period where the Roman Church was divided in schisms. The choice of the subject was probably made by the Pope himself, who is portrayed in the frescoes.

Fra Angelico was one of the most popular of all Primitive artists (art of Western Europ prior to the Renaissance). The interest for this painter started in the late 18th century, when Alois Hirt (1759-1836) a German art historian, discovered the frescoes in the Niccoline Chapel in the Vatican. The first publication of the Arundel Society was indeed the Life of Fra Angelico in 1849, an extract from the Lives of the most excellent painters, published entirely in 1850 with 20 lithograph including copies after Fra Angelico in Rome. Some of them are now in the V&A collection (see for example 23109 or 21100, from the second set of lithographs appeared from 1862 to 1869).

Kaiser’s technique was characterised by a precise attention to detail and accuracy in copying the authentic state of the original (see E.18-1995). However, in these watercolours from the Niccoline Chapel, he deliberately added the names of the central figures in their halos. These do not always appear in the originals by Fra Angelico, however he was known to have included names in a number of his other frescos.

The watercolour copy after the Ordination of St Lawrence (E.16-1995) originally only included the central fresco, however the watercolour was extended by Kaiser at a later date to encompass the entire Chapel, including the windows. This may have been to homogenise the dimensions of the entire group of watercolours, and add the inscription placed in the Chapel by Gregory XIII, who confirmed the attribution of the paintings to Fra Angelico. 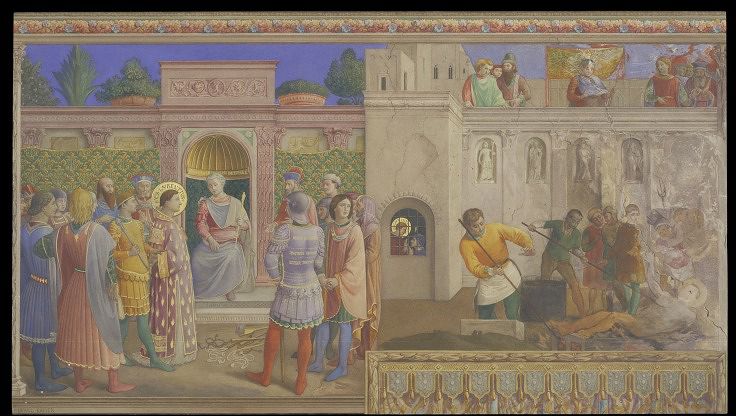