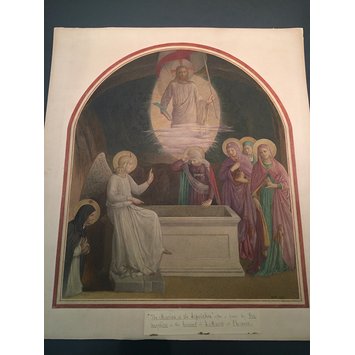 Copy after The Three Maries at the Sepulchre, Fra Angelico in the Museo di San Marco (Florence)

This watercolour is a copy made by Eduard Kaiser (Graz 1820 – Vienna 1895) after the frescoes in the Convento di San Marco in Florence by Fra Angelico (1395/1400 – 1455). It was painted for the Arundel Society, founded in 1848 to promote knowledge of the art through the publication of reproductions of works of art. The Arundel Society popularised Renaissance art, particularly that of the Italian Old Masters, echoing a growing interest for ‘primitives’ in the second half of the nineteenth century. This copy was published as chromolithograph in 1875 (Museum No.27420).

Watercolour of the pious women in red and green dresses standing next to the empty tomb of Christ. One looks inside it. A white angel seats on the sepulchre pointing his finger up. St. Augustine kneels next to him. Above, Christ in white orbe, stands in a halo.

Acquired in 1995 from the National Gallery of London.
Watercolour copy made for the Arundel Society and published as a chromolithograph in 1875 (Museum No.27420) by Storch and Kramer. 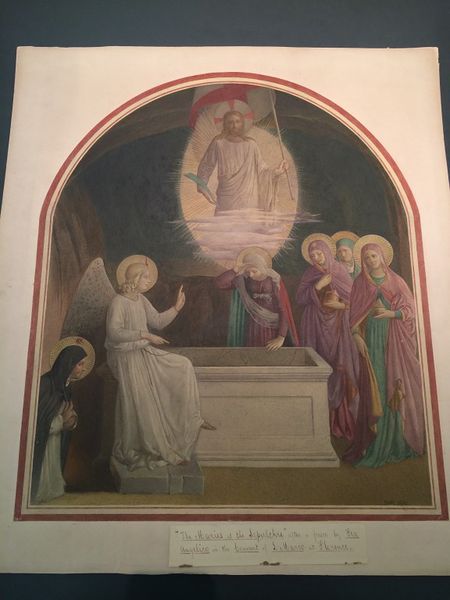