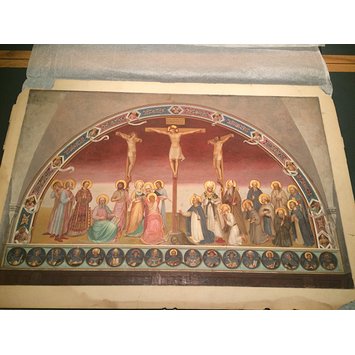 Copy after The Crucifixion, Fra Angelico in the Museo di San Marco (Florence)

This watercolour is a copy made by Christian Schultz (Kassel 1817 – 1882/3) after the frescoes in the Convento di San Marco in Florence by Fra Angelico (1395/1400 – 1455). It was painted for the Arundel Society, founded in 1848 to promote knowledge of the art through the publication of reproductions of works of art. The Arundel Society popularised Renaissance art, particularly that of the Italian Old Masters, echoing a growing interest for ‘primitives’ in the second half of the nineteenth century. This copy was published as chromolithograph in 1872 (Museum No.25701).

Lunette watercolour of three men hanging from wooden crosses. In the lower part, people kneel or stand crying and preaching.

Acquired in 1995 from the National Gallery of London.
Watercolour copy made for the Arundel Society and published as a chromolithograph (Museum No.25498) in 1872 by Hangard-Mauge under the supervision of Christian Schultz.

Copyist
This watercolour was painted by Christian Schultz (1817-1882/3), a German artist and printer. His copy after Fra Angelico's Crucifixion was displayed to the Society's members at the annual general meeting of 1864 with two other copies made in Florence: Ghirlandaio's Last Supper (Cenacolo di Ognissanti, Florence) and Andrea del Sarto's Nativity of the Virgin (Santissima Annunziata, Florence), both in the V&A collection (inv. E.106-1995 and E.273-1995). These were the first copies made by Schultz for the Arundel Society and they met such approval that Cesare Mariannecci (c. 1819-c. 1894), one of the main and most prolific copyists for the Society, was then requested to imitate Schultz’s technique. 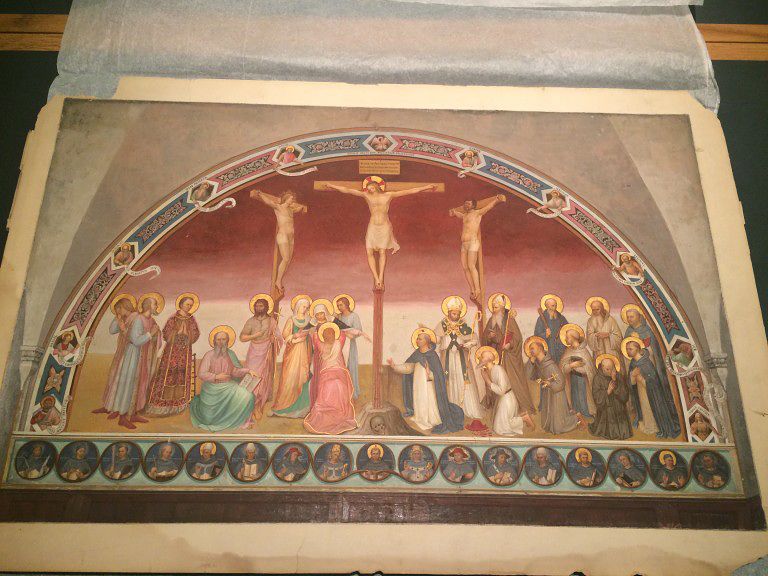