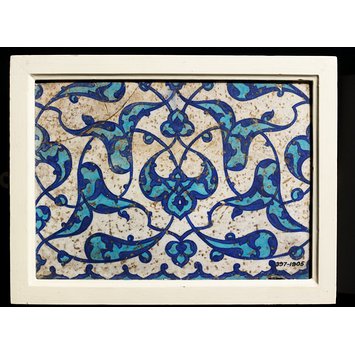 Tile of reddish fritware, painted in dark blue and turquoise-blue on a white slip and covered with a clear glaze. Oblong and painted with arabesques.

This item was part of the grand programme of tile revetments that once decorated a bath-house in the Zeyrek district of Istanbul. So extensive was the use of tiling on its walls that the building came to be known as the Çinili Hamam, the Tiled Bath-house.

(a) Patronage. The bath-house was built by the Ottoman admiral called Barbarossa in Western sources and Barbaros Hayreddin Paşa in Turkish. He is famous as the Ottoman empire’s greatest naval commander. The admiral, whose original given name was Hıdır, was born on the island of Lesbos about 1478. He began his naval career as a privateer, and in the 1510s he assisted his elder brother Oruç in establishing a “sultanate” with ever-changing borders in what is now Algeria and Tunisia. There they confronted the Spanish, whom Oruç was killed fighting in 1518. Barbarossa succeeded him, ruling under Ottoman suzerainty. In 1534 he swapped his province for command of the Ottoman navy. He held this post until his death in 1546, carrying out a series of successful campaigns against the Spanish and their allies, often in co-operation with the French.

During his later years Barbarossa began to erect religious monuments in Istanbul, of which only his tomb in the Beşiktaş district survives. The admiral built his splendid bath-house in the Zeyrek district so that the profits could support his religious foundations. As grand admiral (kapudan-ı deryâ), Barbarossa had access to the resources of the state in realising these projects. The bath was designed by the famous court architect, Sinan (d. 1588), and the tiles that decorate the building relate to those made for the imperial palace in the same period.

(b) Dispersal. The bath-house was sold off in the 19th century, and in subsequent restoration work, most of the remaining tiles were removed and sold to a dealer called Ludovic Lupti, probably in 1874. Lupti marketed them in Paris. From the 1890s to the 1950s, many examples were acquired by the V&A. At the time the Museum was unaware of their origin or even of the fact that they all came from one building. Excavation and conservation work on the bath-house, begun in 2012, has established the connection beyond doubt.

This tile was purchased in Brighton in 1905. On 8 May 1905, the curators A.F. Kendrick and Bernard Rackham reported on a visit to Brighton on the previous Saturday to view the collection of Henry Willett, which was to be sold by the auctioneers Wilkinson & Welch on 10 May. They recommended buying the 11 tiles that formed lot 337, with Frederick Simpson of 46 Sydney Street, Brighton, as the Museum’s agent. They were attracted in particular by the tile that is now 396-1905. An upper limit of £20 was set, but in the event the lot cost only £2.5s.0d, plus Simpson’s commission of 5% and a charge for “packing etc.”, bringing the total to £2.14s.9d. Two of the tiles, accessioned as 396 and 397-1905, have now been identified as coming from the Çinili Hamam in the Zeyrek district of Istanbul.

(c) The complete list of V&A tiles that have been identified as coming from the Çinili Hamam:

Tile, fritware body, painted under the glaze in blue and turquoise, Turkey (Iznik), 1540s; from the Çinili Hamam (Tiled Bath-house) in the Zeyrek district of Istanbul. 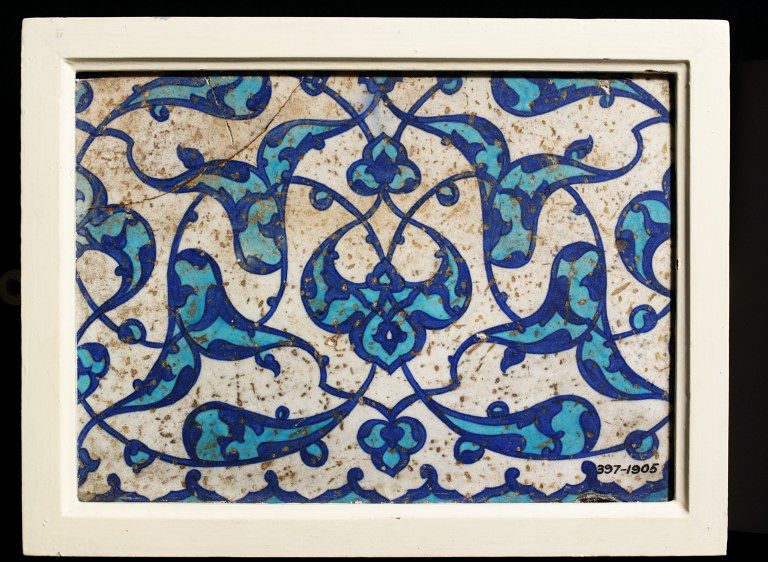