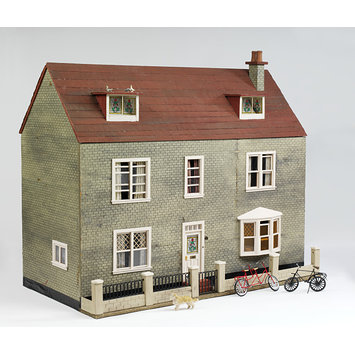 This house is a replica of a real house in Surrey where Roma Hopkinson lived with her family during the Second World War. Roma built this house in the 1980's, paying incredible attention to detail, reproducing ration books, identity cards, newspapers, and photo albums by reducing copies of the original versions. The photographs show her family as they appeared at that time. Each doll is also modelled on a family member with Roma appearing as one on of the children in a school dress. The house accurately reflects the wartime era, showing popular products, foodstuffs, games, and furnishings from the time.

Wooden three storey dolls' house with two dormer windows in a red tiled roof and grey brick exterior walls. Around the front of the building is a low wall topped with metal railings. The front wall of the house can be removed and the front section of the roof can be lifted up to show the interior. In the middle of the house is a carpeted stairway leading to a toilet. On the left hand side of the house is a bathroom, kitchen, and children's bedroom. To the right of the stairs is a sitting room with the main bedroom above it. The attic space is divided in two with one half containing various parts of the electrical wiring system. The house is decorated and furnished in the style of the Second World War years.

This house is a replica of the house in Newminster Road, Surrey, in which the maker Roma Hopkinson lived for much of her life. It is furnished in the style of 1942 complete with gas masks and ration books, and shows a detailed record of domestic life in the wartime period.

“The dolls’ house was made with love and dedication to detail, and a commitment to the truth of how my mother lived during the Second World War” – Claire Hopkinson, daughter of Roma, 2007

Looking back to her childhood during the Second World War (1939 – 1945), Roma Hopkinson made this dolls’ house as an adult in the 1980s and 1990s. It represents the house her family lived in on the St Helier estate, built by London County Council in the 1930s.

Roma painstakingly built up a family home in miniature, using a combination of shop-bought pieces selected for their period authenticity, and things she made herself. Tiny photo albums contain miniscule portraits of the family, and gasmasks hang in their boxes from the back of a Utility style chair.

The Hopkinson family
Roma was born 1st March 1931, to Rosa and George Tattershall Willgoss. She had a younger sister called Norma. In the dolls’ house, Norma is the little girl wearing glasses.

Like many people who were moved into the St Helier London County Council (LCC) housing estate, Roma’s father George was brought up in a Victorian terraced house in South London in the 1890s. Age 22 he was a motor fitter at Halfords in Peckham. A gunner during the First World War, George was posted to France, Greece and Egypt. He ended his five years’ service in an Alexandria hospital with pneumonia over Christmas 1918.

About twenty years later, married with two children, George moved with his family into 35 Newminster Road, at the heart of the biggest housing estate in South London (only Becontree in the East was larger). The new houses had bathrooms and indoor toilets – residents at the time told how they had to stop their children running upstairs to flush the toilet all day, it was such a novelty. Mod-cons like ovens were available “for almost nothing, and if you decided to have gas instead of electricity your cooker came almost free”. Roma’s dolls’ house records these memories in material miniature.

The Second World War started in 1939. In the dolls’ house, we can see how day to day life was affected by international events. Torches all over the house remind us how lights had be blocked or turned off during the ‘blackouts’. ID cards and ration books are stuffed into drawers. “They are all copies of the originals”, wrote Roma’s daughter Claire. “I remember my mother taking copies and reducing them, again and again”.

The furniture in the dolls’ house kitchen is Utility style – the only form of new furniture permitted during the War years, and allocated (like most things) with ration coupons. The hen in the kitchen explains how the family have so many eggs!

Endangered by airstrikes, children in London boroughs were evacuated out of the city. The Willgoss girls were no exception: “Roma was evacuated for two years to Blackpool during the Second World War, she never spoke about these years nor was she willing to talk about them when I asked. So I can only assume they were unhappy times.” The children’s bedroom in the dolls’ house is colourful and bursting with personal details – toys and photos, a favourite dress, little red wellies.

By the fiftieth anniversary of Victory day in 1994, Roma had almost finished work on the dolls’ house which memorialised her experiences of War. Her research and commitment had produced a unique dolls’ house with a personal story and deep resonances. 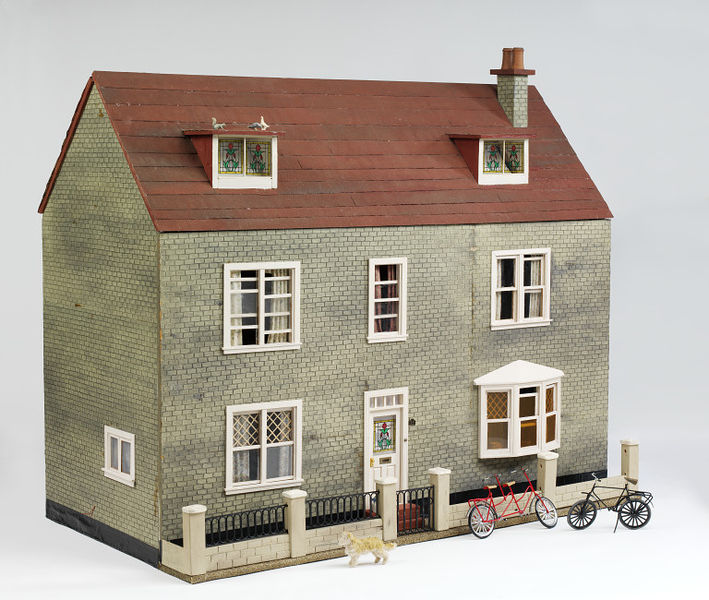