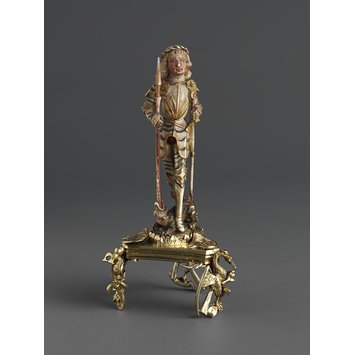 This statuette is on a triangular base, supported by three eagles. At each angle of the base is a shield of arms. The shield on the front bears the arms of the Fugger family of Augsburg, the one on the left appears to be of the Neumair of Augsburg. Those arms indicate an Augsburg origin, and the date of 1490 is suggested by the type of armour worn by the saint. The present statuette was probably an object of private devotion, made specially for another wealthy individual.

Ivory was used all over Europe for religious works of art. It was often combined with precious metals and usually took the form of relief panels, for book covers, portable altars and caskets. An almost unbroken tradition of ivory carving extends from the Roman and Byzantine empires until the end of the 14th century. From about 1250, Paris became the centre of production for figures and reliefs intended for private devotion. Other workshops emerged in Italy and Germany. Venice was one of the centres of ivory carving in Italy. Much of the work was based on French models. Some of the craftsmen may have been trained in Paris as their work often combines French and local styles.
The depicted George is a legendary warrior saint and martyr. His origins lie in Greece and he became popular in the West from the 13th century. He is the patron saint of several European Cities, one of them Venice. He was also made patron of England in 1222. To the early Christians the dragon symbolised the evil. St. George slaying the dragon thus refers to the conversion of a heathen country to Christianity. Later ages interpreted the story following the ancient Greek meaning.

The saint is transfixing with his spear the dragon. At his left a two handed sword. The figure is mounted on a triangular silver-gilt base supported by three phoenixes (formerly said to be eagles), perching on branches and holding the letter M in their beaks. At each angle of the pedestal is a shield of arms. The shield on the front bears the arms of the Fugger family of Augsburg. That on the left, appears to be of the Neumair of Augsburg; that on the right is difficult to read, being the head of either a wild boar, a bear or a lion. The saint is shown in full plate armour, wearing a twisted fillet on his head.

Ivory painted and gilt, on silver-gilt base

In the possession of Hollingworth Magniac, Colworth, Bedfordshire, by 1862; sold at the Magniac sale, 1892, Christie, Manson & Woods, London, 5 July 1892, lot 261); collection of George Salting, London. To the Museum via the Salting bequest in 1910 (no. 1533).
At each angle of the pedestal is a shield of arms. The shield on the front bears the arms of the Fugger family of Augsburg. The statuette may have been in their collection or could have been presented by them. 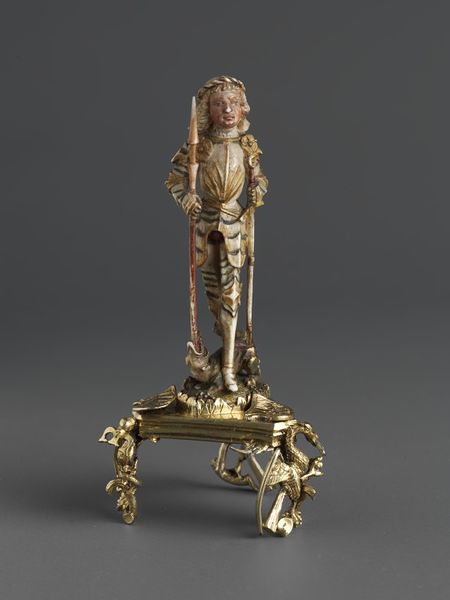