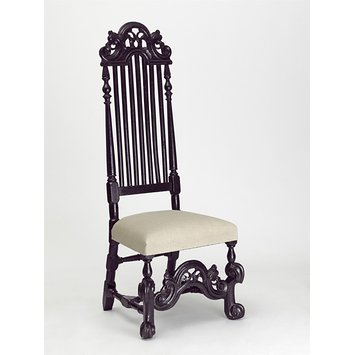 The fashionably tall back of this chair, made in about 1700, is accentuated by the linear pattern of the chair-back. Most of the structural parts of the chair were turned on a lathe to produce baluster and vase shapes. The balusters of the structural back uprights taper towards the top, giving extra emphasis to the verticality of the back. The raked back legs extend up to the cresting rail, and therefore needed to be repositioned at a different angle half way through the turning process. Turning the parts produced slender and elegant chairs, but also had a practical purpose; it reduced their weight so that they could be moved around a room easily. Turned chairs were relatively inexpensive and were made in great numbers. This chair shows evidence of how economically the wood was used: some of the turned parts have flat areas in inconspicuous places, because the original wood chosen was not quite thick enough to be turned fully in the round. The matching arched cresting rail and front stretcher are pierced and carved with C-scrolls. Many chairs of this form and date had caned backs and seats, but alternative treatments were used in areas outside London, where cane was not readily available. This chair might have a drop-in seat with a textile cover, possibly silk, velvet or wool, or a silk/wool mix.

Summary description
A high-backed chair with a canted seat, the back formed of seven narrow uprights between turned balusters at either side, joined by an arched cresting rail which is carved with C-scrolls and pierced. The front legs are turned and carved in the shape of S-scrolls, and joined by a carved and pierced front stretcher matching the cresting rail. The four legs are joined by an H-form stretcher formed of turned parts, with an additional turned stretcher joining the back legs. The chair is made of beech, painted black, the paint covering extensive earlier worm holes. The seat rails are strengthened by later corner blocks and the seat is upholstered.

Structure and materials
The chair-frame is of mortise-and-tenon construction, with pegs securing the side stretcher and the side seat rails. The full-height back uprights are made from a piece of wood angled at seat height so that the legs are raked and the back slightly raked. Turning an angled length of wood on a lathe requred a wedge-shaped piece of wood to be added temporarily in order to create a straight axis on the lathe. The turned parts of the lower section of the back uprights (the back legs) are flat at the back, revealing an economic use of wood, only just wide enough to turn. Multiple uprights cut at an angle would have been cut from one piece of wood, one behind the other, and then turned. A similar economy can be seen in the central cross stretcher, in which an unturned flat section faces the back where it will not be seen. The seven straight upright battens are rounded at the front, with flat backs and sides. These were probably made by attaching two strips of wood together, turning the 'sandwich' and then separating the two halves. There are small rectangular holes at intervals on the back of the battens which may show where pins were knocked into the the two strips to hold them together. After separation the battens were sawn down at each side to the required width.

Upholstery
The current upholstery is not original. On acquisition the chair had a dark green cotton plush cover, over a linen stuffing cover and layers of curled horse-hair stuffing. Once this was removed during conservation (2011), nail holes combined with repeating linear marks on the seat rails revealed that although initially upholstered, the chair had been later covered, less expensively, with a rush seat, before being reupholstered some time before it was acquired in 1914.

Condition
There is evidence of old worm damage over the entire frame. Four later reinforcing corner blocks are screwed inside the seat frame, and one of the narrow back stiles has been reinforced at the back with a wooden splint cut into the wood to support an old break. The back feet are chipped and worn.

Bought in 1914 from T. Charbonnier, who had a shop in Lynmouth and a workshop in Barnstaple, Devon. A.F. Kendrick, a V&A curator who visited his workshop in 1907, reported that 'He had been master of the school of art there for the last 20 years, and ... has been aquiring specimens of furniture, brass ware, pewter, pottery & other objects, chiefly from the district of Devon & Somerset. He has sold as well as bought, but he appears to have endeavoured to keep some of the best pieces. I first saw a few examples at the art schools. He then went to a large shed rented by him, crowded with objects of all kinds, the upper floor being fitted up as a workshop, where he has a cabinet-maker employed in restoring & mending'. It is possible that this chair was repaired, reupholstered and painted black to unify its appearance in Mr Charbonnier's workshop. However there is nothing in its appearance to suggest that the chair frame has been substantially altered.

Many high-backed chairs in this style were made in Britain around 1700, most with caned back and seat. The fact that this chair has a back formed of vertical slats and an upholstered seat suggests that it was made outside London where cane was less available. Backs of this type were probably described as 'with ribbs in the back' or 'ribb back't'. Thomas Roberts, Royal chairmaker from 1686, lists a number of chairs of this description in bills between 1690 and 1710. (Adam Bowett, 'English Furniture 1660-1714' 2002, p. 234).

High-backed chair of about 1700 with narrow vertical battens in the back, carved arched cresting rail and front stretcher.

English high-backed chairs of this period incorporate various turned elements including the stretchers that stabilise the legs. The most challenging parts to produce on a lathe were the tall back uprights because they were not straight. To make them required ‘two-centre’ turning (see diagram).
[01/12/2012] 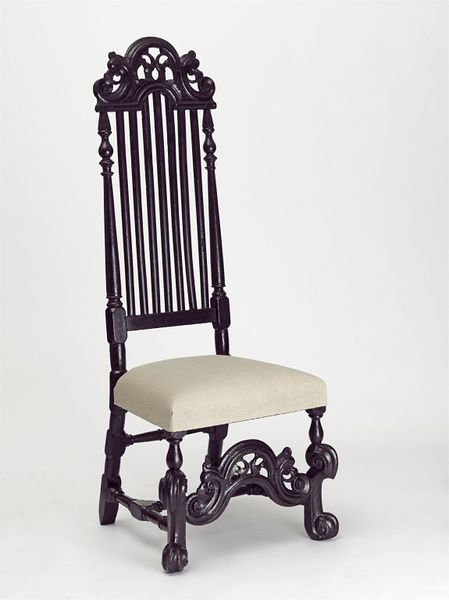