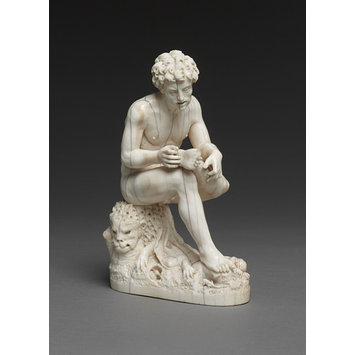 Hercules plucking a thorn from his foot

Ivory was relatively rare at this date so most small-scale-sculpture was made in bronze or hard wood. This statuette, by a medallist who also worked in other materials, is based on an antique prototype, The Spinario ('one who removes a thorn'). The naturalistic plants and animals were added by Weiditz.
The statuette could have been intended for a cabinet of curiosities. Perhaps it was even a male pendant to the Cleopatra now in Nuremberg.

Weiditz (c. 1500 – 1559) was a medallist, sculptor and goldsmith, active in Strasbourg and South Germany. He travelled to Spain in 1529 in the retinue of Emperor Charles V, and again formed part of the Imperial Court’s visit to the Rhineland and the Netherlands in 1530-1. He probably went to Saxony in 1537 and 1539, and may have additionally journeyed to England. His work as a portrait medallist is characterized by a naturalistic style; he also practised as a small-scale sculptor.

The seated figure of Hercules is shown nude, cross-legged, plucking a thorn from his foot, seated on a tree trunk draped with the Nemean lion's skin. He is depicted as a young man, clean-shaven. Plants and small animals, including a lizard and a frog, are shown on the grassy ground at Hercules's feet. His club lies on the ground to his left. His mouth is half open, revealing his teeth, and his facial expression is pained, as he attempts to remove the thorn from his heel.

Bought by Dr W.L. Hildburgh FSA from Ferdinand Knapp, Berlin, on 3 March, 1931; perhaps previously in a Russian private collection; given by Dr Hildburgh to the Museum in 1949; formerly on loan from Dr Hildburgh to the Museum. Although Ferdinand Knapp, the dealer in Berlin from whom Dr Hildburgh, the donor, bought this ivory in 1931, has claimed it came from the collection in the Hermitage at St Petersburg, this has subsequently been shown to be false (I am grateful to V. Kryjanovscayja, curator of medieval art at the Hermitage, for clarifying this).

Historical significance: The pose of the body, though not the head, is based on the antique Spinario, which Weidtiz could have known through a later bronze statuette (cf. Haskell and Penny 1981, pp. 308-10). The head which is more naturalistic than that seen on the antique prototype, could be based on a life study. It is interesting to compare Rubens’s slightly later treatment of the same classical source, in a chalk drawing of the early seventeenth century, where the head was also freely adapted, and almost certainly taken from life (Rowlands 1977, cat. no. 14).

Its combination of the antique with closely observed natural forms suggests it could have been intended for a cabinet of curiosities; perhaps it was even a male pendant to the Cleopatra now in Nuremberg. 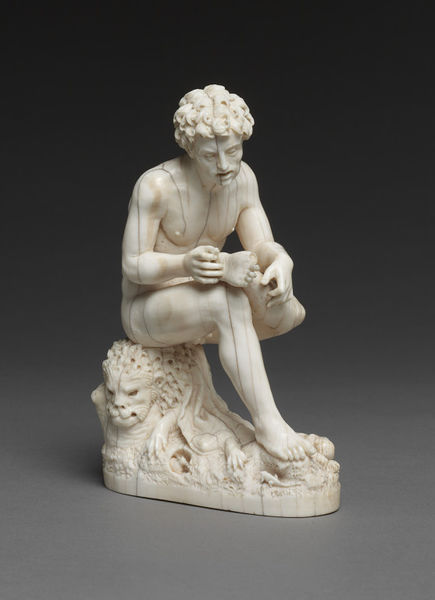