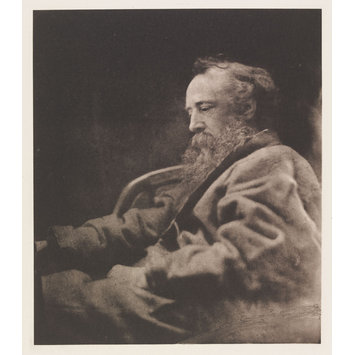 Julia Margaret Cameron’s earliest photographic subjects were family and friends, many of whom were eminent literary figures. These early portraits reveal how she experimented with dramatic lighting and close-up compositions, features that would become her signature style.

In May 1865 Cameron used her sister’s London home, Little Holland House, as her photographic headquarters. Her sister Sara Prinsep, together with her husband Thoby, had established a cultural salon there centred around the artist George Frederic Watts, who lived with them. Cameron photographed numerous members of their circle on the lawn. These included artists, writers and collectors and Henry Cole, the director of the South Kensington Museum.

Cameron considered G. F. Watts, to be her chief artistic advisor. She wrote of this period, ‘Mr. Watts gave me such encouragement that I felt as if I had wings to fly with.’ Here she transforms him into a musician, perhaps to symbolise the arts in general, rather than showing him specifically as a painter.

A photograph of a seated, bearded man (George Frederic Watts) shown in profile.

Julia Margaret Cameron's career as a photographer began in 1863 when her daughter gave her a camera. Cameron began photographing everyone in sight. Because of the newness of photography as a practice, she was free to make her own rules and not be bound to convention. The kinds of images being made at the time did not interest Cameron. She was interested in capturing another kind of photographic truth. Not one dependent on accuracy of sharp detail, but one that depicted the emotional state of her sitter.

Cameron liked the soft focus portraits and the streak marks on her negatives, choosing to work with these irregularities, making them part of her pictures. Although at the time Cameron was seen as an unconventional and experimental photographer, her images have a solid place in the history of photography.

Most of Cameron's photographs are portraits. She used members of her family as sitters and made photographs than concentrated on their faces. She was interested in conveying their natural beauty, often asking female sitters to let down their hair so as to show them in a way that they were not accustomed to presenting themselves. In addition to making stunning and evocative portraits both of male and female subjects, Cameron also staged tableaux and posed her sitters in situations that simulated allegorical paintings.

As the inscription visible on E.2746-1990 and E.2749-1990 indicate, this collotype was made from internegatives (negatives made from rephotographing prints) 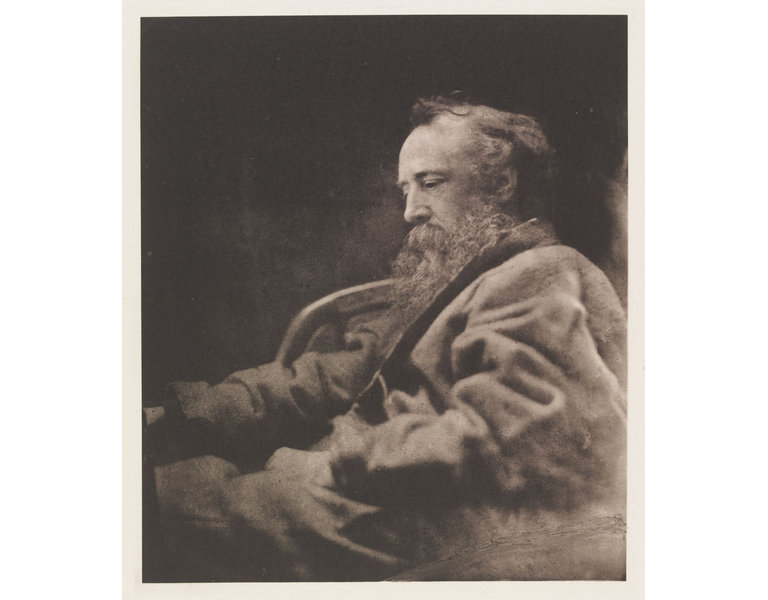