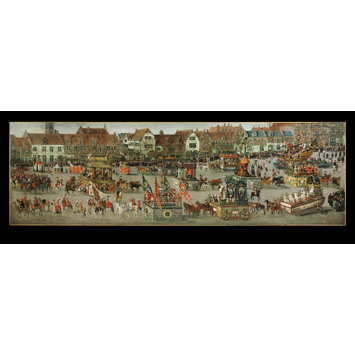 The Ommegang in Brussels on 31 May 1615: The Triumph of Archduchess Isabella

Denys van Alsloot (before 1593-1626) was born in Brussels where he remained all his life. In 1599-1600, he entered the service of the Archduke Albert and Archduchess Isabella who entrusted him with many important commissions. He belonged to the school of Brussels landscape artists like Jacques d'Arthois (1613-1686), Lucas Achtschellinck (1626-1699) and Lodewyk de Vadder (1605-1655).

This painting, along with 168-1885 and 169-1885, was commissioned by the Archduke Albert and Archduchess Isabella to celebrate the Ommegang in Brussels in 1615. This was an important procession that honoured the most prestigious Guild in Brussels: the Crossbowmen guild. The present painting depicts the Triumph of Isabella who was crowned Queen of the procession as she successful shot a jay attached at the spire of the church of Notre-Dame-du-Sablon. This work was therefore the most important in the series because it shows the ten pageant cars that formed the most spectacular element of the parade.

A procession of triumphal floats and chariots on the Grand' Place in Brussels with many colourful figures and banners; in the background are the typical narrow and high houses of Brussels, with people at the balconies.

'DENIS VA [in monogram] ALSLOOT A 1616'
Signed and dated by the artist, lower left

Commissioned by the Archduchess Isabella between May and September 1615, at her palace in Tervuren by 1619; collection bequeathed to Cardinal Infant, Don Ferdinand, Governor of the Netherlands; the Escorial; Lord Stafford, until ca. 1800?; 'Mr Farrer', from whom purchased for the Museum on 11 August 1859 for £94 5s.

Historical significance: Sometime before September 1615 Isabella commissioned eight paintings depicting the Ommegang from Denis van Alsloot for 10,000 livres, only six of which actually seem to have been made. By 1619 these were displayed in the long gallery at the palace of Tervuren, one of the most ancient castles of the Dukes of Brabant, situated in a village north-east of Brussels. Formerly the location of an annual shooting competition between the cross-bow guilds of Brussels and Leuven, it was traditionally associated with St. Hubert of Liege, the patron saint of hunting, and also used for the entertaining of foreigh dignitaries. Stylistically, these paintings are unique in van Alsloot's oeuvre as he chiefly specialised in landscape paintings reminiscent of those painted at the turn of the century by Gillis van Coninxloo. These works are some of the best known depictions of Netherlandish civic spectacles.

For the following account of the subject-matter of 5928-1859 see C.M. Kauffmann (1973): Marked 'cincquiesme', this is the fifth in the series of six paintings depicting the Ommegang of 1615. It shows the Triumph of Isabella, which was organized by the College of Jesuits in Brussels. The documents concerning it are still preserved in the state archives at Brussels (published by Baeston and by Puyvelde, op. cit.), and with their help the participants have been identified. The procession begins in the lower left-hand corner with four camels, followed by the huntress Queen Semiramis of Babylon with the huntress Diana and Phoebus Apollo. Next come two Amazons carrying banners with the monograms of the Virgin and St Anne. The first car, which bears the Jesuit emblem, is that of King Psapho of Lybia, who taught his parrot to say 'Psapho is God'. The king is seated on the car; inside the cage a boy in feathers is teaching the birds to say 'Isabel is Queen'.

The second car represents the Court of the Archduchess Isabella. Fame, blowing two trumpets, is seated on a column, and under a portico bearing an escutcheon with the Lions of Brabant sits a woman representing Isabella. The motto at the side of the car reads Aeternelle memoire te chante une grande Victoire. The next car contains Diana and her nymphs, who have come to honour the Archduchess. It is inscribed Vaincu de plus faute lour(de) Je vien(s) faire mon (?) homage.

The fourth car (second row, on the right) represents Apollo and the Nine Muses. The motto on the front reads: Cedoes voster arc, and that on the side: Nous chantons une belle victoire - a reference to Isabella's victory in the archery contest that preceded the festival. The next car contains the tree of jesse, with the Evangelists at the corner. This is followed by a car containing the Annunciation and another with the Nativity.

In the top row, on the left, are four artificial animals - two camels, a unicorn and a fantastic bird - followed by a car showing Christ disputing with the Doctors in the Temple. The ninth car, containing figures of Justice, Charity, etc., glorifies the virtues of the archduchess. In the front is a panel inscribed Heroina Isabella. The last car, in the form of a ship drawn by marine monsters, was made over half a century earlier for the funeral procession of Charles V in Brussels in December 1558. A print of it is reproduced in La magnifique et somptueuse pompe funèbre faite aux obsèques et funérailles du très grand et très victorieux Empereur Charles Cinquieme ... , Antwerp, Plantin, 1559. This 'ship of Charles V' contains the Virgin and Child with a court of ladies, while at the end are the pillars of Hercules inscribed 'Plus oultre', the insignia and motto of Charles V, drawn by two sea elephants.

Flemish painters of the 15th-17th centuries were internationally renowned for their painstaking naturalism and exact depiction of contemporary scenes. Pieter Brueghel the Elder (1525/30-69) developed a new genre of large townscapes peopled with numerous small figures engaged in pastimes, processions and other activities, which was widely popular and much imitated by later artists. The great cities of Flanders were the setting for numerous civic festivities and processions, typically organised by guilds and other corporate organisations on major church holidays or to celebrate the ceremonial entries of rulers and other dignitaries. In Brussels, the capital of Brabant, power was divided between the patriciate and the so-called nations - nine civic bodies representing the 48 craft guilds. From 1576-85 Brussels was the capital of the newly formed United Provinces, in revolt against the Habsburg rulers of the Netherlands. In 1585 the city capitulated, was purged of Calvinists and its patriciate reinstated.

The Archduchess Isabella (1566-1633), the daughter of Philip II of Spain, married the Austrian Habsburg Archduke Albert, governor of the Netherlands, in 1597, and she continued to govern after his death in 1621. Denis van Alsloot (before 1573-1625/6) is recorded as a master in Brussels in 1599, and received commissions from Isabella and Albert from 1603. They developed their own propaganda to link the Habsburgs with concepts of peace and good government, and established a solid alliance with the Brussels patriciate.

The Ommegang ('Procession') took place every year in Brussels under the patronage of the Church of Notre-Dame du Sablon and the guild of Crossbowmen. Margit Thofner (op. cit. 1999) notes that by 1615, there were two traditions of its origins:
1. That it was held to commemorate the translation of the miraculous image of the Virgin from Antwerp to this church in Brussels.
2. That it was held to commemorate the victory of Duke Jan I of Brabant at Woeringen in 1288.
It was thus regarded both as a celebration of collective, civic piety and as a civic victory parade commemorating the military prowess of the Dukes of Brabant.

At the Ommegang held on 31 May 1615 the Archduchess Isabella was crowned Queen of the Cross-bow Guild after shooting a jay attached to the spire of the Church of Notre-Dame-du-Sablon. In that year the Ommeganck was celebrated with more than usual splendour, and may be interpreted as expressing the political alliance between the court and patriciate, and an ideal of unity under the patronage of the Archduchess Isabella.

In 2015, to celebrate the 400th anniversary of this Ommegang, the 12 Star Gallery and the V&A’s Theatre and Performance Department organised an audio-visual display at Europe House, 1615: Power, politics and performance at the heart of Europe, 22nd July - 11th September.

The display consisted of high-quality digital reproductions of the whole surviving series with an accompanying animated film. The reproduction prints were produced in conjunction with Advanced Imaging Laboratory of Kyoto University.

Oil painting depicting the Triumph of Archduchess Isabella in the Brussels Ommegang of Sunday, 31st May 1615, Denys van Alsloot, 1616

The Triumph of Archduchess Isabella in the Brussels Ommegang
1616

The Brussels Ommegang (Dutch for ‘walk around’) was a procession that took place annually under the patronage of the church of Notre-Dame du Sablon and the city’s Crossbowmen’s guild. In 1615 it celebrated Archduchess Isabella, ruler with her husband of the Southern Netherlands on behalf of Spain. Fantasy animals parade among floats carrying biblical, mythological and contemporary tableaux, representing a symbolic alliance between the Habsburg rulers and the Brussels authorities.

Annual Report of Brussels Jesuits for 1615,
submitted to their headquarters in Rome

‘In the dome there was a boy, his body
dressed with the feathers of parrots,
who was teaching many doves, also
wearing the colours of parrots, to say:
“Isabella is Queen”.’ [09.12.2015]
The Triumph of the Archduchess Isabella on 31 May 1615, from the Ommeganck in Brussels
1616

The earliest known plays in English are medieval mystery cycles. Like the ‘triumph’ shown in this painting, they consisted of Bible stories enacted on wagons. The purpose of the Ommeganck procession, however, was to celebrate the rule of the Archduchess Isabella, governor of the Spanish Netherlands. 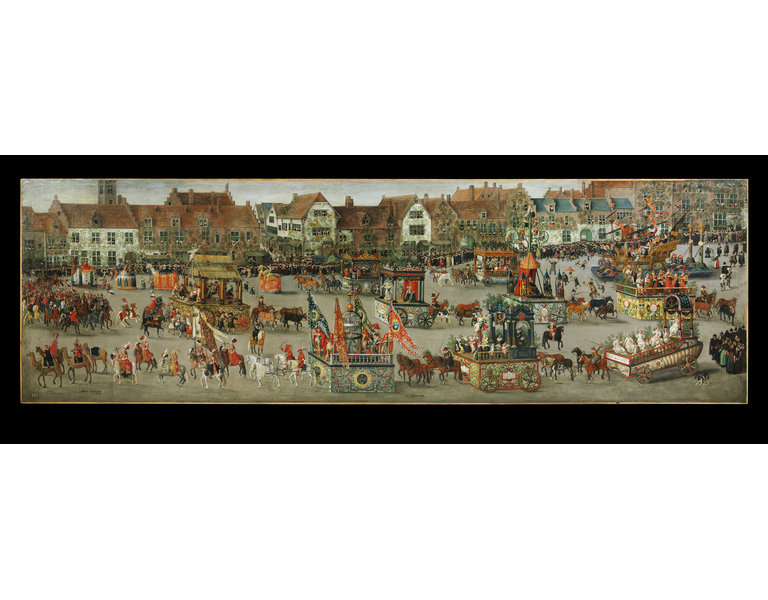