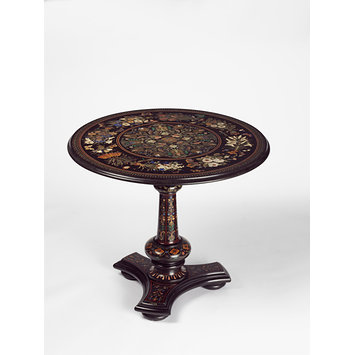 Samuel Birley in Derbyshire made this table for the International Exhibition of 1862, which was held in London. It won prizes in the furniture and the mining classes. Birley specialised in inlaid marble objects. These imitated the Italian mosaic inlaying technique known as pietre dure, or ‘hardstones’. This piece is one of the most elaborate British pieces known. Thin polished slices of hard or semi-precious stone are used. They are cut to form images, for example of flowers or fruit. Often the colours of the stones are used to produce highly naturalistic detail. In this table the motifs were then inlaid into sockets carved into a solid slab of Derbyshire black marble.

Circular table of inlaid Derbyshire black marble with designs of flowers and foliage in coloured marbles and other stones.

Ashford black marble, inlaid with coloured stones, shell, marbles and precious stones including malachite and lapis lazuli. Derbyshire black marble, found in Ashford-in-the-Water, Derbyshire, is a carboniferous limestone that takes a high polish, rather than a true marble.

Exhibited at the London International Exhibition 1862, no. 28 in Class I, 'Mining, Quarrying, Metallurgy and Mineral Produces'. Samuel Birley was awarded a medal in Class 1 as 'the exhibitor of the most elaborate piece of Derbyshire inlaid work, showing the great variety of mineral substances which may be employed in this kind of ornamentation, and the delicacy with which they admit of being cut into fine strips and fitted.'

The Jury Awards commented that 'A numerous series of our most beautiful British marbles were catalogued in Class I., but afterwards handed over for adjudication to another class, from their having been manufactured into vases, inlaid tables, &c. Among them are especially the black marbles and fluorspar of Derbyshire, the coloured marbles of Devonshire, and the bright serpentinous marble of Connemara.' The table was therefore also judged in Class 30, 'Furniture and Upholstery, Paper Hangings &c'. The Jurors commented on Samuel Birley's table as follows: 'The inlaid marble tables executed in Derbyshire are a very remarkable manufacture. The design sometimes leaves much to be desired, but the Jury were anxious to render a just tribute to the good choice of the materials employed, and perfect finish of workmanship' and awarded him a medal 'For general merit'.

J. B.Waring, in 'Masterpieces of industrial Art & Sculpture at the International Exhibition, 1862' commented that...'the manufacture in 1851 had attained a great degree of perfection still we think an improvement is to be remarked since that time, and the circular table executed by Mr S. Birley, of Ashford, from a design by Mr J. Randall, a student of the South Kensington School of Art, although somewhat over-elaborate, was a masterpiece of executive power'. But the author went on to suggest that 'The manufacture, we feel sure, is yet capable of much greater development, and properly directed, might vie successfully with the Florentine works of the same class.'

The table was received on loan from Samuel Birley on 20 November 1862, described in the loan register as 'Circular table on pedestal - both ornamented with inlaid marbles and other minerals on black ground - executed by Mr S. Birley of Ashford from designs of Mr J. Randall, Central School of Art.' It was later purchased by the Museum and accessioned in 1864.

The involvement of Randall as designer needs more investigation. It is not recorded how Samuel Birley got in touch with Randall, who was an art student in London. The involvement of trained designers was something the South Kensington was highly interested in. After the 1862 Exhibition, Museum authorities were keen to 'quantify how much the Design education promoted by the South Kensington had influenced design since 1851' and compiled a list of decorative firms exhibiting in 1862 who had employed designers who had been trained through the South Kensington system. They commissioned a survey and found that '344 students, in the employ of 104 manufacturers, had been engaged on the works exhibited...' (Anthony Burton, 'Vision and Accident: the Story of the Victoria and Albert Museum' 1999, pp 108-109.) Randall is listed in the Museum report as a student at South Kensington in 1860. (V&A registered file on the 1862 Exhibition). Derbyshire marble workers appear not to have employed designers for their usual products sold elsewhere, relying on a repertoire of floral ornament arranged in wreaths or sprays. But their exhibition pieces tended to be far more elaborate with finer inlay, which would have taken many months to complete. For exhibition pieces, it seems that the Derbyshire makers employed external designers. Another Derbyshire maker, is also recorded as employing a designer: John Tomlinson of Bakewell exhibited a 'geometric table, inlaid with specimens of Derbyshire marble, from an exquisite design by Mr G. Goldie, architect.' (Derbyshire Advertiser and Journal, 'Derbyshire and the International Exhibition', 16 May 1862).

In 1867 Samuel Birley's table was exhibited at the Paris Universal Exhibition (under his own name, rather than under the name of the Department of Science and Art, South Kensington, although it was by then part of the Museum collection. Exhibiting in 1867 by the Department of Science and Art needs further research.) In his Report on 'Decorative Work and Upholstery', Class 15 of the Exhibition, Matthew Digby Wyatt compared Birley's table top with the pietre dure exhibited by Italian firms. 'Many very good samples of the usual imitations of flowers, &c., inlaid in black marble for table tops and cabinets, are contributed by various Florentine manufacturers, amongst whom the jury specially noted the houses of Barzanti, Betti, and Rinaldini. In the same class of goods the table top exhibited by our solitary producer in the same line, Mr. Samuel Birley, of Ashford, Derbyshire, was much admired. Observations were, however, made upon the inequality of scale in which the centre group of flowers and the surrounding wreath had been worked out.' Reports on the Paris Universal Exhibition, 1867, Vol. II, p.355.

In 1884 the table was lent to an exhibition in Matlock Bath, Derbyshire, which aimed to improve the quality of design of Derbyshire marble inlay, and to revive the industry. However, the marble making trade in Derbyshire was by then in decline owing to changing tastes and died out in the 20th century.

Samuel Birley ran a cottage workshop and showroom 'At the top of Court Lane' in the village of Ashford-in-the-Water, Derbyshire, where he employed four or five men, including his brothers John and Charles, John Kidson and William Wilson. The business is recorded in trade directories between 1850-1899, described as a marble inlayer, or occasionally as a marble inlayer and turner, suggesting that he could turn his own marble pedestals and vases. His name was sometimes spelt Burley. He was recorded in Slater's Directory in 1884 as manufacturer of inlaid marble. Charles Birley was recorded as working 1885-1899. Information from John Michael Tomlinson, 'Derbyshire Black Marble', 1996, p. 42.

Birley did not sign his pieces, and no other tables known to be by Birley have been recorded, although several have been attributed to his workshop on the basis of the table in the V&A. However several makers were working in this style and fine technique. The Natural History Museum, London, in the Petrology (building stone) collection, holds two sample pieces shown by Birley at the London 1862 Exhibition showing the difference between the Derbyshire technique of inlaying coloured pieces into a solid block of black stone, and the Florentine technique of gluing a veneer of coloured pieces over a smooth backing stone, together with a watercolour sketch of the design.

Black Ashford marble, inlaid with specimens of Derbyshire marble; designed by J. Randall and made by Samuel Birley for the London International Exhibition, English, 1862

CIRCULAR TABLE
ENGLISH
Inlaid with designs of flowers and foliage in coloured marbles and other stones on a black ground in imitation of Florentine mosaic.

Designed by J. Randall and manufactured by S. Birley. Exhibited at the International Exhibition. [pre October 2000]
TABLE
ENGLISH; 1862
Designed by J. Randall (dates unknown)
Made by S. Birley, Ashford, Derbyshire
Ashford marble inlaid with various stones
Birley manufactured inlaid marble objects in imitation of Italian Pietre Dure. This is one of the most elaborate pieces known, purchased by the Museum from the London International Exhibition of 1862 where it had won medals in both the Furniture and Mining classes. [pre July 2001] 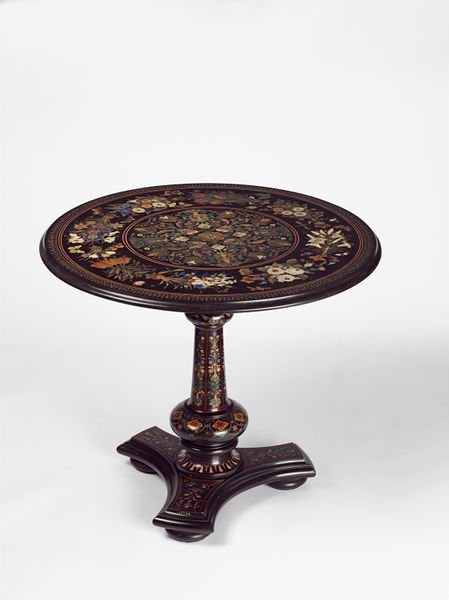