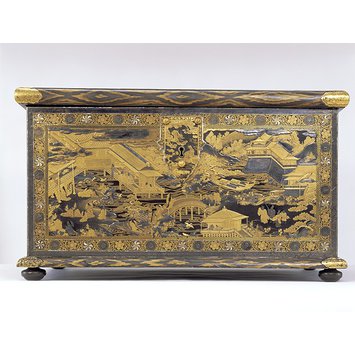 The Mazarin Chest is one of the finest pieces of Japanese export lacquer to have survived from the seventeenth century. Japanese export lacquer was first produced in the late sixteenth century and was quite distinct from domestic wares. It was made in a hybrid style that combined Western forms with techniques and decoration derived from both Japanese and foreign traditions, especially those of China and Korea. During the 1630s, a new style of export lacquer evolved. This was characterised by a small group of objects of exceptionally high quality which showed similarities to lacquer for the home market. It is to this group of export lacquer that the Mazarin Chest belongs.

Although Westerners would have had no knowledge of Japanese literature, the front and sides of the Mazarin Chest are decorated with scenes from the Tale of Genji (Genji monogatari) and The Tale of the Soga Brothers (Soga monogatari). The Tale of Genji is the supreme masterpiece of Japanese prose written in the early 11th century by a court lady, Murasaki Shikibu. This massive work is divided into 54 chapters and its action, based around court life, spans almost three-quarters of a century. It follows the the life and loves of Prince Genji and, ater his death, the novel continues with the story of his son, Yugiri, and Kaoru, who passes as Genji's son. The right-hand side of the Mazarin Chest is decorated with a scene from The Tale of the Soga Brothers, a tale of filial pietyand revenge. The boar hunt depicted on the side of the Mazarin Chest refers to the revenge of the Soga brothers on their father's murder.

The interior and exterior of the lid of the Mazarin Chest are decorated with scenes of palaces, architectural complexes and landscapes. These allude to the Xiaoxiang ba jing (Eight Views of the Xiao and Xiang Rivers). Derived from a theme in Chinese poetry, this was taken up by Chinese painters to depict the watery landscapes of the Rivers Xiao and Xiang and Lake Dongting in southern China. The theme was introduced to Japan and was often adapted to a Japanese setting, centred on Lake Biwa in Omi Province, known as the Eight Views of Omi (Omi hakkei). These are framed by distinctive cartouches formed by pairs of confronting phoenixes on the outside and confronting dragons on the inside. Compared to all other decorative surfaces of the Mazarin Chest, the back is much more sparsely and simply decorated with a tiger among bamboo. This subject is frequently encountered in Japanese painting of the late sixteenth and early seventeenth centuries.

The Mazarin Chest has a companion piece, which is very similar in subject matter and workmanship, but it is somewhat larger in size. It was purchased at the Hamilton Palace Sale by Sir Treor Lawrence (1831-1913), a well-known collector of Japanese art by whose name it has been commonly known. Between 1941, when it was recorded in the sale of contents of Llantarnam Abbey in Wales, and its remarkable discovery in France in 2013, its whereabouts was unknown. It was sold at auction on 9 June 2013 and bought by the Rijksmuseum in Amsterdam, now referred to as the Rijksmuseum Chest. Another chest recently came to light in the State Historical Museum, Moscow. Although pictorial allusion to the Eight Views of Omi is evident on this chest, Genji references are reduced to depictions of women in court dress. Unusually the inside of the lid is also inscribed with the name Cornelis van der Lijn, governor-general of the Dutch East India Company, 1646-1650.

There are also two other items of export lacquer that have very close connections with the Mazarin, Rijksmuseum and Moscow Chests, even though they do not share the same superb techniques of manufacture. One of these was originally another similar chest that was cut up at some later date and partly reworked in the early nineteenth century to form two French Boulle-work cabinets. One of these cabinets is in the V&A (1084-1882); the other was offered for sale at Sotheby's, Paris on 29 March, 2007. The seventeenth century lacquer panels of these bear unmistakable similarities to corresponding parts of the Mazarin and Rijksmuseum Chests, especially in the Genji scenes.The probable lid (FE.65-2009) of the original chest was found in a Paris workshop and acquired by the V&A in 2009.

The other of the two export lacquer chests similar to the Mazarin, Rijksmuseum and Moscow Chests mentioned above is a cabinet from the Charlottenburg Palace in Berlin. The panels of these are also extremely close to the exterior and interior of the lids of the Mazarin and Rijksmuseum Chests.

An entry in the Dutch East India Company archives, dated 1643, mentions '4 extraordinarily large rectangular chests, all lacquer ... at 144 taels each', which was an enormous sum of money. It is likely that this refers to the Mazarin Chest, Rijksmuseum Chest, Moscow Chest and the chest that was cut up to form two Boulle-work cabinets. Although the Charlottenburg Cabinet includes a cartouche of pairs of confronting phoenixes, the fact that the item is a cabinet not a chest and is of significantly lower quality would suggest that it is of slightly later date than the others.

Despite the difference in technical execution, all these items of export lacquer reveal certain striking and distinctive similarities that suggest they were made at roughly the same time in the same workshop. There are unmistakable similarities between the Mazarin Chest and the set of Hatsune wedding furniture for the domestic market. It is possible that Koami Nagashige (1599-1651), the tenth Koami master, who was responsible for the lacquerwork and who presided over the most prestigious workshop of the time, was also responsible for the Mazarin Chest and other related chests. According to the Koami kadensho, a document that lists the official commissions undertaken by the first eleven masters of the Koami family, it is evident that during Nagashige's time, the workshop was extremely large and that it took on capable craftsmen when the need arose. Between 1637, when three sets of furniture were commissioned, including the Hatsune set, and 1644, when two other sets were ordered, there would have been time to fulfil more orders. This was precisely the time when the Mazarin and related chests are thought to have been made.

Flat-topped lacquer chest with a hinged lid. Lacquer decoration depicts various scenes from the Tale of Genji and the Tale of the Soga Brothers, landscapes and palaces and a tiger among bamboo.

It is assumed that, like other examples of export lacquer, the Mazarin Chest was either shipped directly to Europe or to an official of the Dutch East India Company serving in the Dutch East Indies. Nothing, however, is known of its early history. The earliest information concerning its provenance derives from the coat of arms of the Mazarin-La Meilleraye family on its French steel key, suggesting that it was once in their possession.

The Mazarin-La Meilleraye family was related to the Mazarin family, descendants of Jules Mazarin (1602-1661), who was born in Rome as Giulio Mazarino. Mazarin became a French statesman and Roman Catholic cardinal, who ruled France as the first minister of the regent Anne of Austria for her five-year-old son, Louis XIV (1638-1715). The first duke of the Mazarin-La Meilleraye family, Armand de la Porte (1631-1713), received the title when he married Cardinal Mazarin's eldest niece, Hortense Mancini (1649-99). It is highly unlikely, however, that he commissioned the chest. Not only is he known to have had little regard for works of art, but he actively defaced some treasured items. It is more likely that the duke acquired the chest from the Mazarin family, since the Cardinal himself is known to have collected lacquer.

Sometime after this, the Mazarin Chest came into the possession of Jacques Leopold, Duc de Bouillon (1746-1802), who had amassed a splendid collection in Paris. In 1800, the chest passed into the ownership of William Beckford (1760-1844), Gothic novelist and eclectic collector. He had a particularly fine collection of Japanese lacquer, much of which came from the Duc de Bouillon. Beckford kept the Mazarin Chest at his home at Fonthill Abbey, Wiltshire.

Chest, wood covered in black, gold and silver lacquer, inlaid with gold, silver and shell, and with copper fittings, depicting scenes from the Tale of Genji and The Tale of the Soga Brothers, palaces, landscapes and a tiger among bamboo, Japanese for the European market, ca. 1640

This extremely high-quality lacquer chest is one of the most important pieces of Japanese export lacquer ever made. It is recorded as having been shipped to Europe by the Dutch East India Company in 1643. Its first owner was the French statesman and Catholic cardinal Jules Mazarin. The scenes on the front and sides allude to episodes from classical Japanese literature. The landscape on the lid features temple buildings and a castle complex. 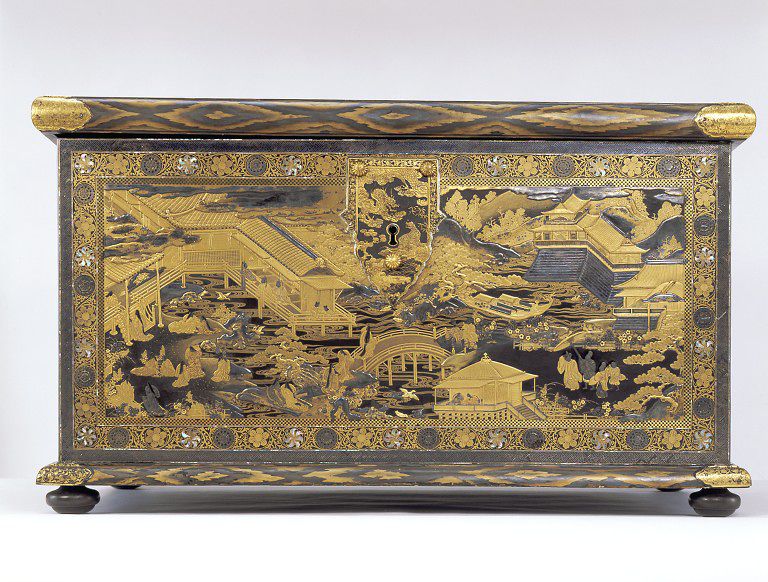