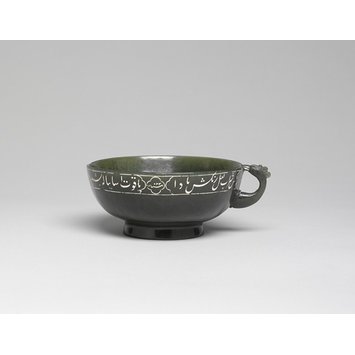 This wine cup of dark green nephrite jade was made for the Mughal emperor Jahangir (r. 1605-1627). The inscriptions include the date 1022 of the Islamic calendar, and the year eight of Jahangir's reign, corresponding to 1613 AD. The Persian verses in cartouches between the dates may be translated: Through the World-Conquering Shah, the world found order/ our time became filled with light by the radiance of his justice/ From the reflection of his spinel-coloured wine may/The jade cup be for ever like a ruby. The verses have been associated with Sa'ida-ye Gilani, the Iranian master craftsman who was the superintendant of the royal goldsmiths, and also renowned for his skills in working hardstones. It is very likely that he made the cup.
At this time, nephrite jade imported from Khotan was an extremely rare commodity at the Mughal court.

Shallow cup of dark green nephrite jade, with one handle in the shape of a cockerel's head and neck. Persian verses and the date incised on the rim, filled at a later date with white composition.

Mughal empire (made in the imperial workshops, probably in Agra., made)

Az shah-e Jahangir, jahan yaft-e nezam [sana 1022]/......../az aks-e sharab-e la;l rangesh bada/yaqut-asa piyale-ye [sana 8] yashm-e modam
Through the World-Conquering Shah, the world found order/ our time became filled with light by the radiance of his justice/ From the reflection of his spinel-coloured wine may/The jade cup be for ever like a ruby [translation by A.S. Melikian-Chirvani]
The Persian quatrain is interrupted by two quatrefoils containing the regnal year (sana 8) and the Muslim era year (sana 1022), which gives a date corresponding to 21 February - 6 August 1613, when the court was in residence at Agra.

The cup was made for the Mughal emperor Jahangir. After coming to the UK, it was bequeathed by N. B. Edmonstone to the Royal Asiatic Society and was with that part of the Society's collection transferred 'temporarily' to the India Museum in London in 1869. The museum of the Royal Asiatic Society had been maintained from the founding of the Society in 1823 to 1869 when it moved to smaller premises (see Kathy Lazenbatt, "The Early History and Collections of the RAS" in Royal Asiatic Society, Newsletter, Spring 2008, pp. 7-9). The Indian Museum's collections in turn were dispersed in 1879, and the cup came with other material to the South Kensington Museum. At that time, it was presumed that all the objects from the Royal Asiatic Society had been given to the Indian Museum. In 1923, however, their status as loans to the Indian Museum was recognised and all the items were reviewed, with most being given by the RAS to what was now the Victoria and Albert Museum. The wine cup of Jahangir was purchased, for £100 (see RP1924/2593, Minute from CSC [Caspar Stanley Clarke] dated 27.V.'24). 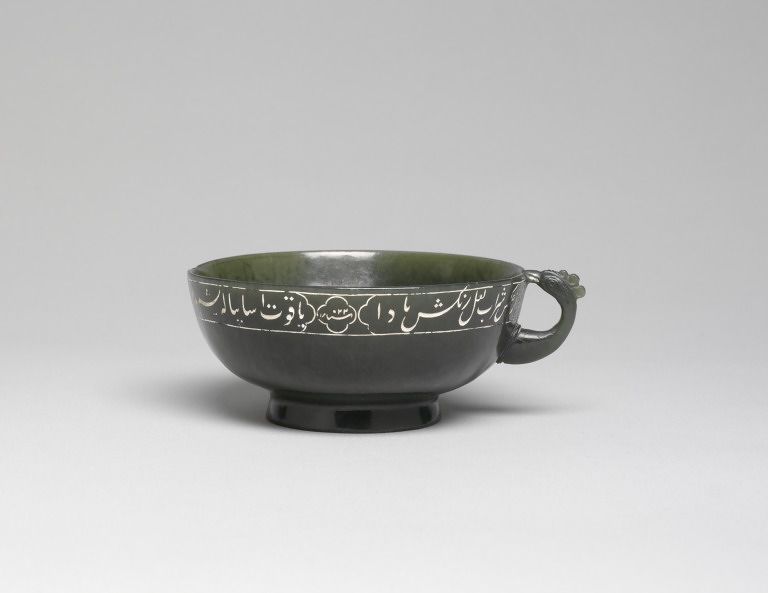