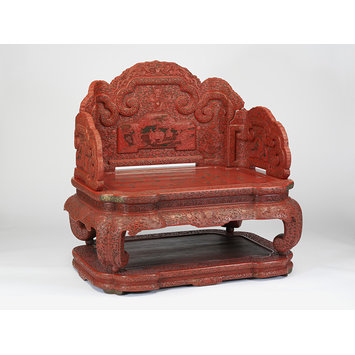 The throne, decorated in carved polychrome lacquer, was almost certainly commissioned in the late 1780s for the Tuanhe Travelling Palace, one of several temporary abodes of the emperors of the Qing dynasty (1644-1911) in the Nan Haizi ('southern ponds') hunting park immediately south of Beijing. Originally it would have been displayed with a matching screen behind it, and its hard surface would have been padded with cushions. The throne is decorated with images suited to the imperial status, including five-clawed dragons and figures representing bearers of tribute from foreign lands. The throne was taken by Russian soldiers in 1900 and brought to Britain following the Soviet Revolution of 1917.

This throne was almost certainly commissioned in the late 1780s for the Tuanhe Travelling Palace, one of several temporary abodes of the emperors of the Qing dynasty in the Nan Haizi ('southern ponds') hunting park immediately south of Beijing. This park formed the setting for a number of military reviews celebrating the apogee of Manchu power in Asia, but was neglected in the nineteenth century and gradually fell into decay. The Nan Haizi park was looted by Russian troops in 1900-01, in the aftermath of the occupation of Beijing by troops of the eight allied powers (including the United States and Great Britain) that invaded China, ostensibly to suppress the so-called Boxer Uprising. The czarist Russian ambassador Mikhail N. Girs acquired the throne in China and brought it to Britain following the Soviet Revolution of 1917.

There is no firm evidence as to which of the Nan Yuan 'travelling palaces' the throne and its attendant screen were taken from. It can be assumed that some form of 'throne' was present in the main halls of all four. If it was taken from the Tuan He Travelling Palace, as being the most desirable object of looting, then that would suggest a date of 1775-1780, which is acceptable stylistically.

The throne was displayed by the dealer Spink & Son at its St. James's premises and bought from the firm on behalf of the Museum by George Swift, a major figure in the wholesale potato industry in Britain and, during World War I, a colleague of Edward Fairbrother Strange, the V&A's furniture curator.

The throne has a companion screen (museum number 71.233) in the Museum Fur Volkerkunde, Vienna. The main subject there is the Pan Tao Feast, birthday of Xi Wang Mu, which runs across all three leaves. The screen was in the Austrian embassy, Beijing by October 1900, and relatively full documentation survives concerning its acquisition by the Museum.

Originally the hard surface of the throne would have been padded with cushions. 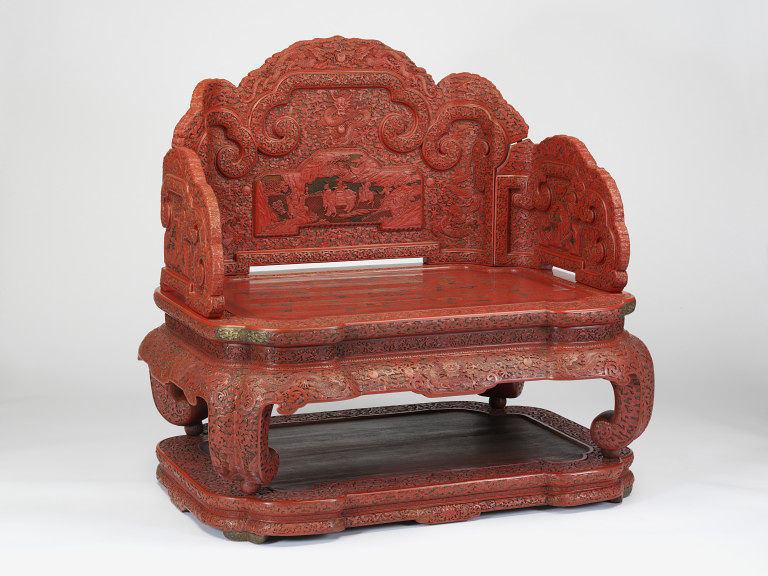