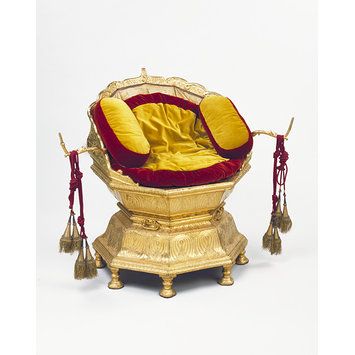 The goldsmith Hafez Muhammad Multani made this throne for Maharaja Ranjit Singh, probably between 1805 and 1810. It shows clearly the splendour of the maharaja's court. In Europe, royal furniture is usually simply gilded, which creates the effect of gold without incurring the cost. This throne is covered in thick sheet gold, heavily ornamented. The distinctive cusped base is composed of two tiers of lotus petals. The lotus is a symbol of purity and creation and has traditionally been used as a seat or throne for Hindu gods in sculpture, and in their depiction in painting. The lotus is also a metaphor of purity in Sikh scriptures. The contents of the Sikh treasury, including the throne, were taken by the British East India Company at their annexation of the Punjab in 1849. The jewellery and jewelled artefacts, silver furniture and courtly weapons were all auctioned in Lahore shortly after the annexation, but the throne was sent to London to be displayed in the museum of the East India Company in Leadenhall Street. When the museum's collections were dispersed in 1879, the throne was transferred to the South Kensington Museum, later renamed the Victoria and Albert Museum.

Golden octagonal throne, of waisted shape, with 8 feet and handles at narrowest part. The throne has a raised, solid back, with supports on the left and right side, from which tassles hang. The seat contains gold and red cushions (the present fabric dates from the late 1980s) and overall the gold is embossed with floral and scrolling ornamentation.

Wood and resin core, covered with sheets of gold worked in repoussé, chased and engraved

The throne was made for Maharaja Ranjit Singh (r. 1801-1839), and inherited by his descendants. It was taken from Lahore by the British at the annexation of the Punjab in 1849, with the rest of the contents of the Sikh state treasury. Every item was inventoried at the time under the supervision of Dr John Login, who recorded the information supplied by the treasurer, Misr Makraj. This included the information that the throne was made by Hafez Muhammad Multani, but not the date of its creation. Most of the contents of the treasury were auctioned shortly afterwards, in Lahore. The throne was retained: the British Governor-General, Lord Dalhousie, was not sure if the throne should be sent to Britain, and wrote to the Court of Directors of the East India Company in London: 'It is set apart as an object which the court would probably desire to preserve, but as it is bulky, I shall not forward it until I receive orders to do so'. The Company did wish to preserve it, and in 1853 the throne travelled to Calcutta (where Dalhousie had a wooden replica made) before being shipped to the Indian Museum in London.
Here, it was seen by an Indian student who recorded his thoughts: 'It was painful to see the State chair of gold of the late lion of the Punjab [Ranjit Singh] with a mere picture on it; shawls without babes; musical instruments without a Hindu Player...' (quoted in Ray Desmond, The Indian Museum, 1801-1879, p. 91).

In 1879, Ranjit Singh's Golden Throne moved to the South Kensington Museum, later renamed the Victoria and Albert Museum, where it has remained ever since.

Thrones were portable objects used in camp as well as in court. The waisted shape suggests the lotus seats of Hindu/Buddhist/Sikh iconography.

GOLDEN THRONE OF MAHARAJA RANJIT SINGH
Sheet gold, cast and chased, on a wooden core
Probably Lahore
Made by Hafiz Muhammad of Multan
1818 or later, the cushions modern

2518(IS)
The first Sikh maharaja of the Punjab was famously modest in his personal appearance. However, he wanted his court setting to be as splendid as possible. The throne was made by Ranjit Singh’s leading goldsmith, probably after the Sikh army captured the important city of Multan (now in Pakistan) in 1818. Contemporary paintings of the throne show that each of the two projecting branches originally had a golden sphere. It was taken by the British from the Sikh treasury after they annexed the Punjab in 1849. [27/9/2013] 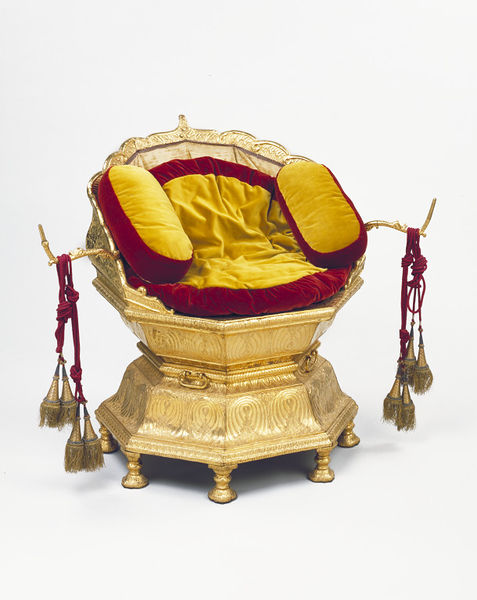