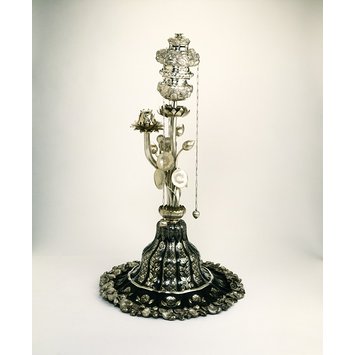 This object was purchased by the India Museum at the Paris Exhibition of 1867 and transferred to the South Kensington Museum (now the V&A) in 1879. Hamilton & Co., which manufactured it in Calcutta, was founded in Edinburgh in 1808 and traded continuously until 30 June 1970. The huqqa, or ‘hubble bubble’ (smoking pipe), is a fine example of bidri ware, which is made by casting zinc alloyed with small amounts of lead, copper or tin. This forms a base for designs inlaid in silver. The name relates to Bidar, the city in central India most widely associated with the technique, which is unique to India.

The base and stand of this example are inlaid with a silver flower motif and silver mounts. The stem screws into the top of the base and is a hybrid of Indian and high Victorian taste, with naturalistic lotus flowers twining round the central stem. The tobacco bowl and cover are made of separately cast pieces decorated with a lotus pattern in low relief.

Huqqa with Indian metal design (bidri) work base and stand, with applied silver flowers around base. Stem, 'chilam' and 'sarpush' in silver, in the form of a flower stem, with naturalistic lotus flowers and leaves twined around it.

Pseudo-assay marks of an elephant and 'P' in Bengali script on the cover of the 'chilim' (tobacco bowl).

This flamboyant water pipe was almost certainly made for the 1867 Paris exhibition. It is a hybrid of Indian and high Victorian taste.

A few Europeans smoked huqqas as late as the 1860s although it was becoming less socially acceptable in English circles.

Letter 'P' in Bengali script close to the pseudo-assay marks denotes the name of the craftsman. 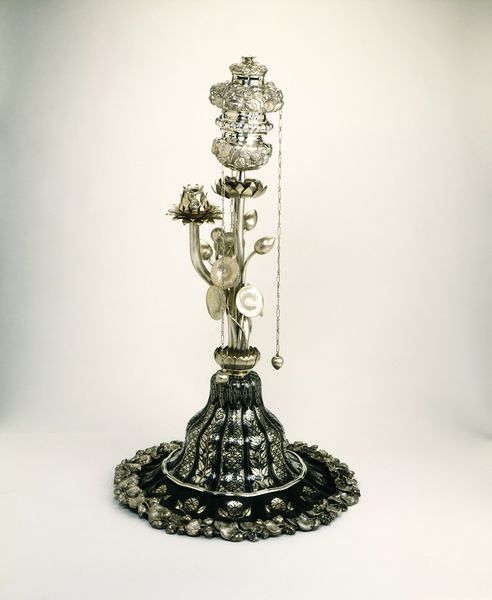