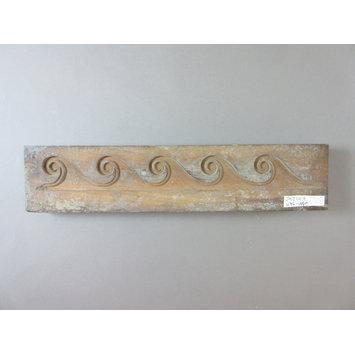 This mould is reverse-carved with a vitruvian scroll, an ancient Roman form of ornament. It was often used on a frieze and is also known as running dog. The mould was used for the multiple production of architectural ornament in plaster or in ‘compo’. ‘Compo’ is a generic term for ‘composition’, a paste or putty. It usually consisted of four basic ingredients: whiting, glue, rosin and linseed oil.
Reverse-carved moulds of this kind were widely used from about 1780 until about 1900. Initially, the ornament was produced by pressing a thickness of ‘compo’ into the oiled mould, and squeezing it in a screw press. The pressing could then be removed from the mould in a still warm and flexible state and applied to the surface to be decorated. The use of moulds to make reproduction ornament greatly reduced the demand for ornamental carving in wood.
Composition manufactories, as well as firms such as carvers and gilders, used moulds and commissioned them from specialist workshops. This mould comes from a collection of moulds that the London firm of George Jackson & Sons Ltd (trading in 1780) gave to the Museum in 1988, when they became a subsidiary of Clark & Fenn Ltd. Jackson’s had acquired moulds from other companies, such as the London-based firm of Brown’s, who went out of business in the first half of the 20th century. It is thus unlikely that they made the whole collection of moulds.

The design consists of a band of scrolls (the opposing design to W74A-1989).

There is evidence of machine markings (made when cutting the block to dimension).

The bottom end has no evidence of paint or size but appears to bear the number "615" (although this is very feint) in black. The green painted, top end bears the number "220P", again in black.

The bottom end appears to bear the number "615" (although it is very feint) in black.
Bottom end

The top end is sealed with green paint and "220P" is in black.
Top end

The mould was made for the mass production of architectural ornament from moulding materials, such as "compo" (a generic term for the paste or putty, usually consisting of four basic ingredients: whiting, glue, rosin and linseed oil. This was used in the late 18th and early 19th century).

It may have been commissioned from a carving workshop by the London based firm, Brown's, who are thought to have been bought out by the firm of George Jackson & Sons Ltd. in the first half of the 20th century when Brown's went out of business. These moulds were offered to the Museum in 1988 when Jackson's became a subsidiary of Clark & Fenn Ltd.

Some of the moulds have a name or intials such as "GS", which are thought to relate to their respective carver.

Historical significance: Many of the designs are in the classical style, suggesting a late 18th and early 19th century date, however others are clearly mid and late Victorian. Further research will help to establish their date through their style of pattern. The majority of the collection (without further analysis) seems to be made of box and various fruitwoods. However other woods are in evidence for example, the supporting blocks for the finer strips of boxwood, into which the ornament has been carved.

The presence of machine planer marks are in evidence on many of the moulds, which will assist in establishing their date. Others have no such evidence, and hand cut fixing such as nails.

These reverse carved moulds were used in the late 18th and throughout the 19th century to produce architectural ornament from mould making materials such as "compo". Composition manufactories, in addition to firms such as carvers and gilders, used these moulds which were commissioned from carvers' workshops.

It is thought that the Adam brothers played a major role in the initial manufacture of ornament on a grand scale in this way, and are rumoured to have employed a George Jackson (1756-1840), the founder of the present company, George Jackson & Sons Ltd. (a subsidiary of Clark & Fenn Ltd.) Thus the turn of the 18th century gradually witnessed a sharp decline in the number of carvers, those still remaining in employment often working in reverse as opposed to relief, to create the moulds.

Initially, the ornament was produced by pressing a thickness of compo into the oiled mould, and squeezing it in a screw press. The pressing could then be removed from the mould in a still warm and flexible state and applied to the substrate. Towards the middle of the 19th century, machines were introduced and more widely used in the production process.

Though there is no evidence to suggest that these moulds were actually made in London, it is thought that Jackson's acquired moulds from another London company, possibly Brown's.

Attribution note: For the production of architectural ornament. 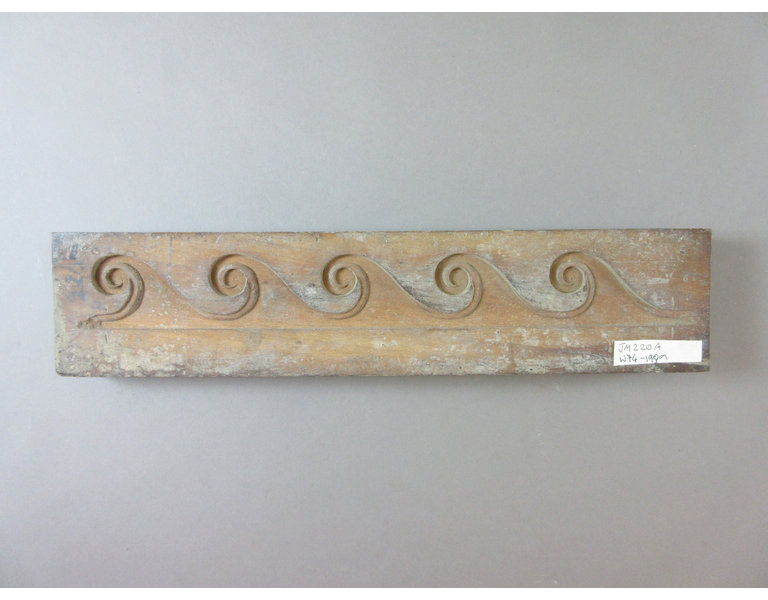